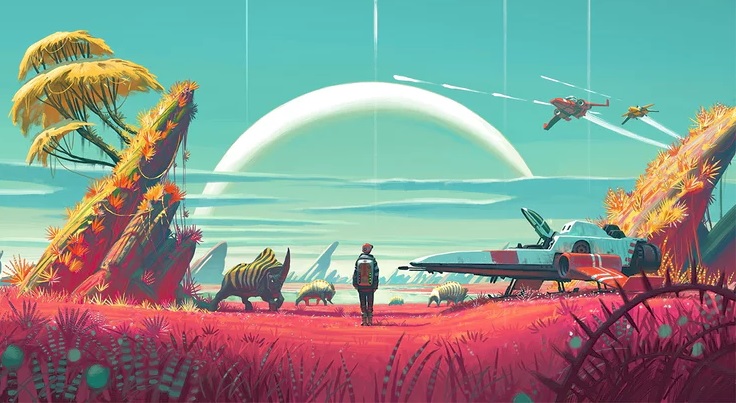 No Man’s Sky is out. You’ll have to forgive me, but that feels like something worth saying. Not because the game is the second coming, or because it is “the last game” we’ll ever need, but because, even after all this time, it remains a game built in service of a tantalizing idea.

When Sean Murray spoke to Kill Screen’s Jamin Warren earlier this year he put it simply: “the emotion that we wanted to get from people is that emotion of, ‘I have travelled to a place and discovered it.’” That idea, of true discovery in a digital world, has perhaps been lost of late. Discussions of length and breadth, features and bugs, delays and disappointments has obscured its simplicity. The weeks leading up to release have been shadowed by complications, diversions, and unnecessary details. Yet, No Man’s Sky, from my first impressions, doesn’t seem overtly concerned with those details. Instead, it feels confident, broadly drawn, and surprisingly human. Its systems are robust, toylike, and eager to please. Its creatures are goofy, its starships look kitbashed and its landscapes can be eye-searingly lurid.

is it the poster child for new procedural generation

Yet, the sum of the controversies, misunderstanding, and expectations of many still seem to weigh on its release. The question that lies beneath this nervous rumble is “which No Man’s Sky is the real one?” Is it the programmers’ dream game, the one that delivered Sean Murray’s nervous excitement to the center stage of E3, bringing with it explanations of maths and perlin noise that rarely make it out of the studio doors? Or is it the poster child for new procedural generation, a reinvigoration of a technique older than games themselves, pointing towards a bright future? Perhaps it is the ultimate space simulator, an infinite universe richly populated with systems and features, drawn with Nintendo-like luster. Or maybe it is the infinite game itself, the one with untold combinations of limitless variables, the one that might eclipse reality entirely.

When you begin to list these expectations, variations, and partly fabricated visions of No Man’s Sky you begin to hone in on the problem. Perhaps uniquely, No Man’s Sky has found itself to be a canvas for the projections of those eager for games to deliver their childhood fantasies to them wholesale. This seems to be a trait of its assigned genre, the “space sim,” which places it among the company of Elite (1984), Freelancer (2003), EVE Online (2003), and Star Citizen. It’s a genre that, perhaps because of the presence of “simulator” in the title, seems disengaged from ideas of artistic and personal expression, presenting instead the imaginary ideal of a “total” universe, sured up by a rhetoric of “infinite possibilities” and “go anywhere, do anything” ambitions. It’s a genre that, in some strange way, has its own teleology, a final destination of a complete simulation of existence, a collectively imagined fantasy of a complete digital universe. This fallacy has both guaranteed No Man’s Sky a healthy following of insatiable fans, and obscured its actual nature as a game. The ubiquitous cries of, “but what do you do?” have originated from a willful misunderstanding of the game, a disbelief that the focus of a supposed “space sim” would be the wandering exploration of planets in service of a sense of wonder alone. It was as if people found it impossible to believe that an “infinite” game would be created without bowing to their genre checklists and outrageous expectations.

In reality, No Man’s Sky is what it appears to be: An impossibly big game, created by a small, passionate team. A personal exploration of ideas of wonder and discovery. A love letter to the optimism and imagination of 1970s science fiction. When Warren spoke to Murray earlier in the year, they didn’t speak about grand visions of infinite simulations, or whether the game had black holes, binary systems, and planetary rings. They spoke about immigration, travel, and vast unknowable landscapes. They talked about Murray growing up in the Australian outback, a place he remembers for “massive wide-open spaces, being completely alone basically, and crazy skies as well.” He added: “My parents claim full ownership of No Man’s Sky.”

“if you could evoke the true emotion of exploration”

They discussed how Murray visited the North Pole, and after his Ski-doo broke down, ended up on his own, hours behind his expedition: “I should have been stressed, I should have been worried. But I was just like, ‘This is amazing.’ I had no idea how to get back. I was maybe going the wrong way. But let me just take this in.” Ultimately, they spoke about the things Murray and his team at Hello Games would have spoken about when they first started on the journey of making No Man’s Sky: “What we talked about was imagine Skyrim [2011] or Red Dead Redemption [2010], leaving the cities and the scripted part of the game behind, going out.” Explains Murray, “the core of that really exciting idea, which is if you could evoke the true emotion of exploration—that’s a really inherently human thing.”

Inherently human. It’s perhaps not the image people have of the impossible alien expanses of No Man’s Sky, of its sense of untold promise. Yet, on the day of its release, that is what we are entering into. Not an infinite universe, not the ultimate space sim, but something human. Yes, No Man’s Sky will be judged on genre, it will be judged on the features people think it should have, and it will be almost certainly be found wanting by some, falling short of their imaginary “perfect game.” But, if it is to be valued, it should also be judged on its own terms, measured up to its own ambitions. It should be understood as a piece of personal expression, a filtering of life experience, and a ridiculous and specific dream made into something flawed, complex and real. Otherwise we stand to miss why this most unlikely of games exists at all.