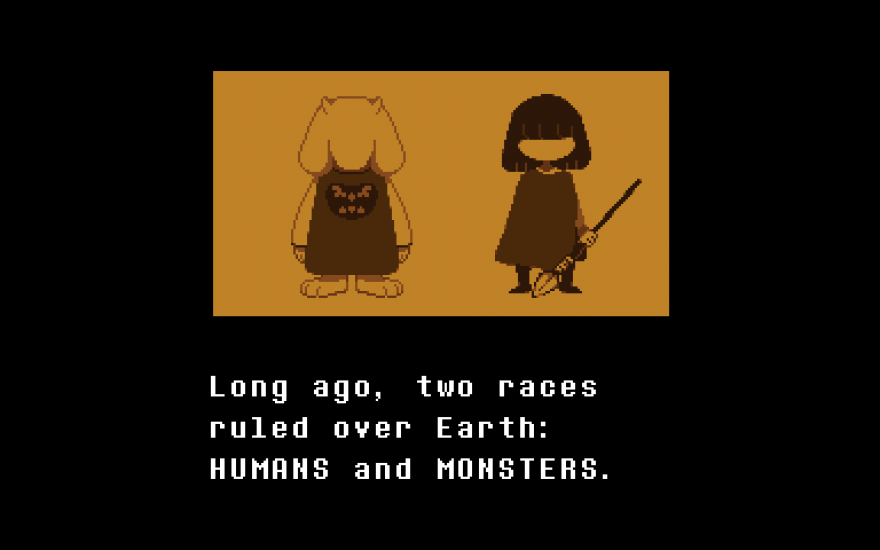 It was about an hour into Undertale when I lost my ability to trust it.

Let me tell you what happened. The first character you meet in Undertale is named Toriel. She’s a motherly guardian figure, caring over underground ruins filled with monsters. She herself is a monster—all the beings living in this underground realm are. The player, however, is a human, fallen into the underground due to an unfortunate accident. Despite the racial tensions (you learn that humans locked monsters away in this underground realm after a war long ago), Toriel takes you in. One of the first things she does is teach you about the virtues of nonviolence.

The monsters in the underground, she explains, are largely peaceful folk, fighting out of fear and vulnerability more than anything else. She tells you that it takes strength not to fight. And, indeed, combat encounters in Undertale can be won without killing. The structure of combat is turn-based, like a classic Japanese role-playing game, with a few new menu options: Actions, which let you talk to or interact with your opponents in unique ways, and a Spare option, which lets you give the monster a chance to leave the fight unscathed. Each fight is a puzzle: by saying or doing the right things, you can sap away at an opponent’s will to fight, then choose Spare to resolve the matter peacefully.

That is, until the game makes you fight. At the end of this first section, Toriel stands in the way of your progression. Your character, a young, determined girl, just wants to go home. Toriel fears that you’ll die beyond the doors of her realm within the underground. So, purportedly for your own good, she blocks your path. To progress in the game, you have to fight her.

There is, of course, a way to do this without killing Toriel, but it’s incredibly counterintuitive. The player has to choose the Spare option a number of times, with no assurance that it will work until, eventually, it just… does, like flicking a mystery switch in your apartment with the hopes that eventually a light will turn on. I didn’t know this. I tried the Spare option: nothing happened. I tried to talk to Toriel: nothing happened. So I read the situation the game laid before me. The only efficacious option was to fight. So I did. I killed Toriel. I don’t think Undertale approved.

I try to play games the way they seem to want to be played. This can mean a lot of things, depending on the game, but largely it means reading the messages it sends you, the way it explains and presents itself, and attempting to imagine what sort of player it is sending those messages for. If the game speaks loudly about its objectives markers and missions, then that’s what I’ll do.  If the game encourages and rewards exploration, I’ll forge off the beaten path. This way of play allows for critical evaluations on the game’s own terms, so to speak, determining what it wants to be and then seeing how it measures up to its own internal metrics.

Pacifism is never mandated, but it feels constantly encouraged.

Undertale wants to be played with nonviolence in mind. Pacifism is never mandated, but it feels constantly encouraged. Every character, even the most villainous, is at least funny if not deeply sympathetic—the worst monsters in this world are motivated by grief and fear. Besides, you’re in their home, and are a member of a race of oppressors. If anyone has a legitimate right to aggression, it’s the monsters, who believe that you might be their ticket to liberation from their subterranean prison. The pacifist route, for all intents and purposes, is the “good” one. Which is why Undertale quickly became untrustworthy for me.

When Toriel fell, the game permanently marked me as an aggressor. The best I could hope for was the “neutral” ending, a mark of my moral failing made in the game’s ledger through the rest of the playthrough. Not, however, because I wanted to kill Toriel. I very much did not. I simply didn’t realize I had the option to do anything else.

Outside of forced combat scenarios, Undertale bursts, everywhere, with a self-assured charm and a confident gregariousness. One of the major recurring characters is Sans (yeah, like the font; he speaks only in Comics Sans, and his brother is named Papyrus); he talks in jokes and effuses a playful flippancy that hides a sincerity beneath. He winks often, a gesture that evokes both his humor and the earnest warmth under it. He’s like most of Undertale: charm giving way to earnest conversations about kindness, nonviolence, and the possibility for collective growth sparked by individual generosity.

This is a game with fearsome knights, killer robots, game show hosts and cute puppies. It invites you to befriend all of them, using humor to toy with the clichés of its genre and encourage the player to find the humanity (or, perhaps, monstrosity, since humans are so associated with oppression in this game’s world) flowing in places where you might not expect it to.

Later, Sans tells me that he befriended someone behind the locked door to the ruins where I started the game. This, I know, is Toriel. They started telling knock knock jokes to each other, and now it’s a ritual; regularly returning to make each other laugh. It’s a touching moment, but also one colored by the knowledge that Sans will never do this again. Because, well, she’s dead. Again, I feel less guilt over this than I do anger.

In “The Tyranny of Choice,” critic Aevee Bee writes, “There are not some games that subvert player agency, and others that grant it. Rather, all games, by nature of being games, by nature of being systems, inherently restrict player agency in the exact same ways […] Though a game with a good/evil morality system appears to be a dialogue between two points of view, it is actually a statement: that the world is a morally definite one.”

moral questions in videogames can be a challenging proposition

Due to the limited nature of player agency, attempting to interrogate moral questions in videogames can be a challenging proposition. To put it another way: how can I have made the wrong choice if it’s a decision the game forced me to make? Repeatedly, Undertale throws the player into unavoidable boss fights, where negotiation is not an option. These fights can be won nonviolently, but only through puzzle solving. Like my fight against Toriel, these conflicts require the player to take advantage of hidden mechanics, repeat actions without knowing whether or not they’ll succeed, and subsist under a barrage of enemy attacks. (Relatedly, when the player does not fight, they don’t gain experience, which means their health remains incredibly low, making the unavoidable combat even more challenging.)

The player’s choice, then, to fight or not to fight, is not one necessarily related to roleplaying or ethical considerations. It’s also a mechanical consideration. A failure to deliver mercy might simply be a failure to solve a puzzle, or figure out a way to survive with inadequate resources. In my case, it was a decision made because the game did not effectively communicate to me that I could do anything else. I wasn’t making my choices as a moral actor. I was making them as a player. I encountered this problem over and over during my playthrough. Every boss fight was not a question of, “Do I want to kill this individual?” It was a question of, “Can I solve this puzzle? Do I have the resources to survive long enough to deliver mercy before Game Over?”

As a phenomenon, this sort of mechanical constraint might have communicative value. Nonviolent resistance, after all, is a performance of sorts: resisters play a role in response to an aggressor, ceding one type of power in the hopes of gaining another. In doing so, they submit to significant constraint and the possibility of intractable failure. Being beaten or jailed is not a failure of nonviolent resistance, it’s a state that’s planned for and accepted as a possibility.

The constraints of Undertale‘s nonviolent combat, then, might suggest something similar, highlighting the way that choosing not to fight is a profound risk, not to be taken lightly. Their presence in a system, though, one which has carefully constructed each choice and then determined how those choices are communicated to the player, however, suggests something different. It suggests a communicative failure, one brought about by the nature of the system itself. The charming, morally earnest rhetoric of Undertale conceals the coercive weaknesses of its systemic approach to those same moral issues. Its limited combat options and often obtuse puzzle solving, alongside the sheer endurance required to survive boss fights long enough to end them, add up to a system that doesn’t point to any elaborate moral insight. It simply points to itself.

At the end of Undertale, I have to fight again. Since I’ve struggled hard to take the pacifist route, I have low health and low attack power. But since I killed Toriel, I have to fight. Going into the battle, I’m not sure I can win. Nor am I sure I want to. But I don’t see any other options, and I really don’t think that’s my fault.