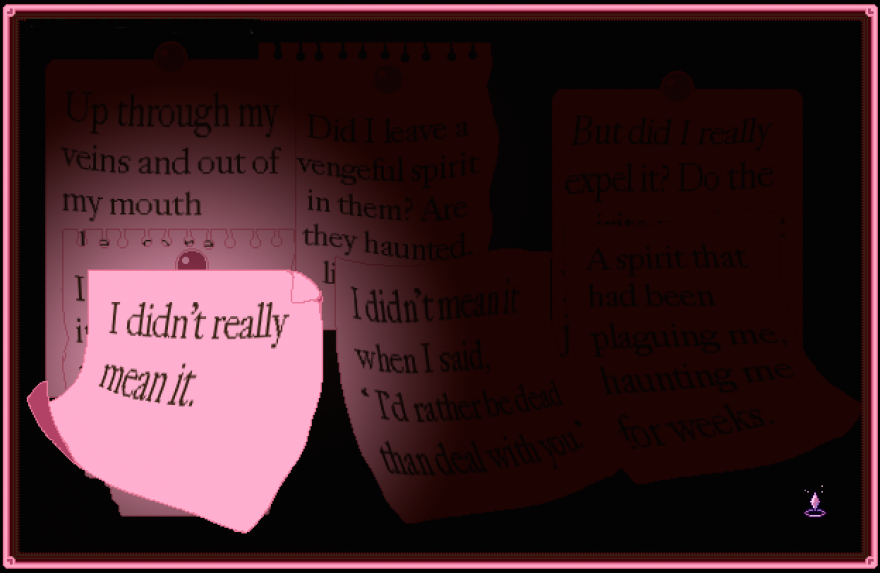 Outside, the waves crash against the shore rhythmically. Inside, a broken robot suit lies sprawled on a bed, one arm yanked off and left dramatically on the floor. It’s accompanied by a keyboard that, upon further inspection, is literally made of gold. You can pick up the broken arm, or attempt to play the stubbornly immovable keyboard, but your cautious avatar doesn’t want to go near the robot. That’s understandable, as she just came to this beach, this cabin, to mourn.

This is, more or less, the unfinished demo recently released by Arielle Grimes called Simulus, subtitled Cabin in the Cache. Weirdly enough, for a game that involves dead robots in mysterious cabins, mourning is actually how it starts.

the pressing weight of grief ever-present

The player is going through a personal tragedy. The feelings are written out on pink post-its, vague and incorporeal as devastation always is, and peeled away piece by piece as the player settles into her skin. You go to the ocean to get away. It’s a relic of childhood memories, providing some semblance of solace after the turmoil and hurt of the past. You turn to your right and spot a cabin.

Herein lies the robot. The cabin—or the part we see in the demo, at least—is a barred-off tunnel, a door that looks closer to a bank vault than a vacation home, and an open hallway leading to the aforementioned room and its strange, surreal contents. You take this in stride. In the grand scheme of things, with the pressing weight of grief ever-present, the unreal is just another thing to process.

That’s where Simulus really shines. The strange, skippy way it stutters through the description of a tragedy; the alien haze that hangs over the whole world when you are mourning. The space between the two makes more sense than it should.

Play the Simulus demo (Cabin in the Cache) on itch.io.