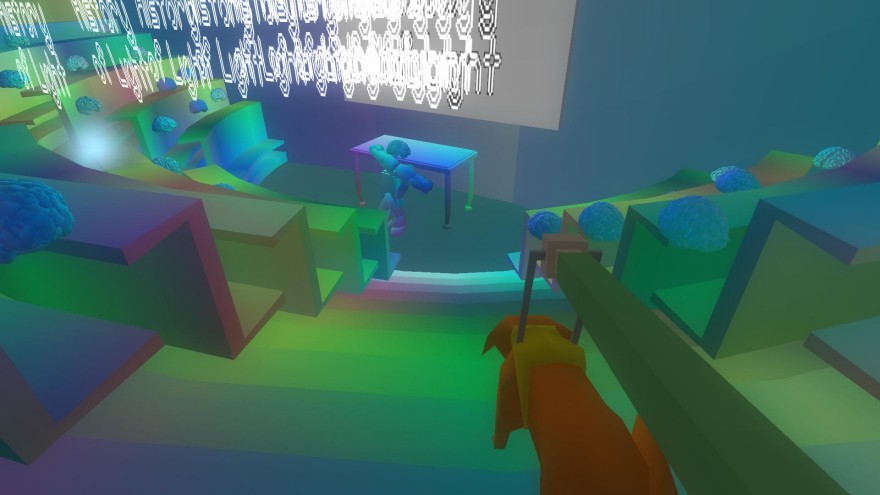 The elusive non-metaphors, disturbing-yet-relatable characters, and jumpy plots that warp you between dimensions can make it hard to connect to Increpare’s games beyond filing them away under “weird.”

For those familiar with his work, it should only come as a mild surprise that his latest, Universal History of Light, is a wild trip into canine insanity.

It’s a game of three acts. The first sees you controlling a dog as a disembodied arm stiffly attached to its leash. The dog is attending what would presumably qualify as a science class inside a lecture theater with tie-dye lighting. Its fellow students are floating brains that sit motionless upon the staggered rows facing the teacher at front center.

The self-contained black-and-white world inside is populated with upset, miserable, and tortured people.

You’re given a snippet of framing that creates some sense of order within the confusing second and third acts. If you aim a laser pointer at a dog it will go insane (it is unable to comprehend “such incorporeal entities as a red dot of light,” apparently). The teacher has a laser pointer, so you can guess what happens next, but you probably won’t expect the dog to float into a dark disco orb afterwards.

The self-contained black-and-white world inside is populated with miserable, tortured people. A shop owner fears the “hoodies” who steals his  stock. A frazzled homeless person warms himself by a fire inside a hollowed barrel; his only desire is to get a good night’s sleep.

Most striking is the distorted glitch-being that was turned inhuman by agony and pain. This is the type of character that often appears in Increpare’s games: a grieving soul that has experienced unbearable loss. Its only way of communicating with you, it turns out, is through text messages beamed from a cellphone. Perhaps this is a Turkelian commentary on our reliance upon computers over face-to-face conversation.

The whole experience ebbs with an underlying social commentary that is probably too obscure to really ever “get.” Dog turds walk around boasting how they beat people up, are avoided by others due to their smell, and tell you of how they want to escape this damned place. At one point you rob the shop, and use a Gamut of Justice to get away with it all, which either says something about the failings of courts and legal systems or is just an abstract event with no meaning at all.

As always with an Increpare game, it’s hard to say what’s going on and what anything means in Universal History of Light. You can’t ignore the humanist outlook, however, which focuses on pain, longing, and injustice—reoccurring themes in his work.

You can download Universal History of Light for free right here.