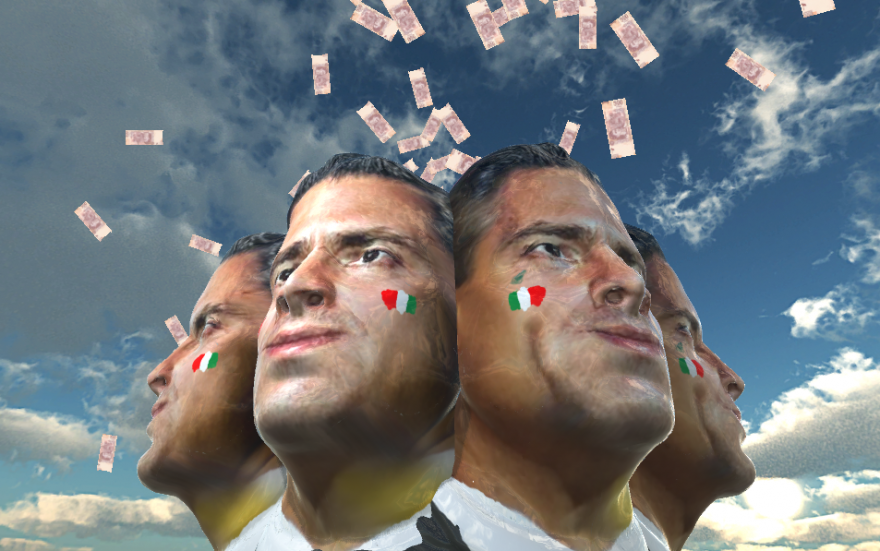 For some, it was only a matter of time before Mexico’s most infamous drug lord escaped. After being captured just last February, Joaquin “El Chapo” Guzman spent less than 18 months in police custody before it was discovered last weekend that he was no longer in his cell. Instead, prison security discovered a hole that led down into an elaborate tunnel complete with lighting and air conditioning, an engineering feat more likely the result of rampant corruption than the tenacious resourcefulness of one man. For a country at war with its drug cartels, the failure of Mexico’s government to keep Guzman locked up has become symbolic of the growing distrust between the country’s people and their government

In a recent online art installation, the group Vngravity tries to articulate this cynicism by examining it at the highest office. Rather than look at Mexico’s worst criminals, it turns its gaze to the people in charge of bringing them to justice, like the country’s President, Enrique Peña Nieto. The exhibition, titled Dreamhouse takes place in and around Casa Blanca, a reconstruction of the presidential residence as interpreted by the show’s artists.

“a postcard about illicit luxury”

Unlike Guzman, Peña Nieto did not grow up living in extreme poverty. Instead of working his way up the ranks of Mexico’s criminal underworld, he negotiated his way out of the middleclass and into the top tier politics. Peña Nieto won over Mexico’s voters with his charming looks and polished intelligence, but Dreamhouse asks whether he’s not more of an opportunist parasite than a national savior. Even before Guzman escaped, the spectre of shady land deals and cronyism has tarnished Peña Nieto’s legacy in recent years.

Depicting the home of Peña Nieto “had international resonance as a postcard about illicit luxury, thug practices of the elites,” the artists behind the project explained. “But the satiric tone makes it not a local issue, but a global view of squandering.” In Dreamhouse, pop culture references abound, including some subtle nods to Mexican political literature. While the crushed husk of a Peugeot sports car on the front lawn and 50 Cent’s “P.I.M.P.” playing in the background make the installation’s agenda clear, other artifacts sprinkled throughout the compound leave the experience feeling more surreal and ambiguous.

Built using Unity, players explore the Dreamhouse’s 3D space by walking, jumping, and looking. Unlike most digital first-person perspectives, the camera bounces in-sync with the player’s footsteps instead of gliding weightlessly along a fixed-point. The result is a perspective that feels grounded. It’s a small detail, but one that goes a long way toward bridging the space between the audience and the installation, helping the experience of navigating Dreamhouse through an internet browser more closely approximate what it would be like to walk through the exhibit if it existed in real life.

The democratizing of gallery spaces in this way is a core priority not just for this show but the group’s upcoming ones as well. “Vngravity is a project that is trying to redefine how galleries work around the world,” the group explains on its website. Since the spatial and financial constraints of live galleries can limit their reach, Vngravity wants to democratize distribution by focusing on digital art. “We feel this system will give artists more visibility around the world and that it will also open up new perspectives of how a work of art can be sold and purchased.”

Since the “terrain” of the online gallery changes every few months, Dreamhouse will likely only be available to the public until the end of the summer.