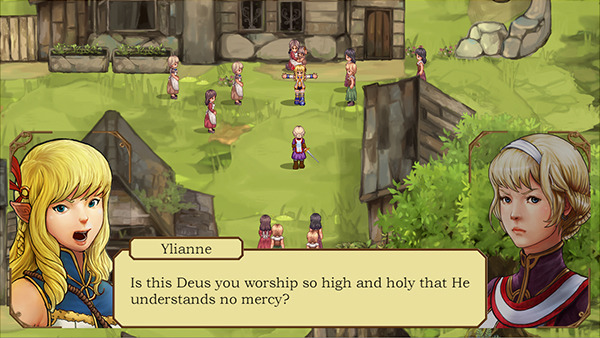 Celestian Tales: Old North has some distinctive Suikoden energies going on, and it is nearly funded on Kickstarter after only a week. Put those two facts together and you arrive at the actuality that a whole lot of people still love their grand pastoral adventures about semi-authentic ancient Asian dynasties.

And for good reason. Along with Lunar and Chrono Cross, Suikoden belonged to that legendary crop of Japanese RPGs for PlayStation that rode the anime invasion of the ‘90s to a cult following. Yet the series unravelled due to Konami being Konami: Later iterations failed to ignite the same passion. The series got mixed up in tactics. Suikoden Tierkreis on DS left vets wanting. I hear there is a Suikoden pachinko machine in Japan.

Given the dire circumstances, Celestian Tales looks like a bet worth taking. Made by a small team from Indonesia, it looks gorgeous, with digitized watercolor graphics, fluidly animated characters, plenty of old-school RPG-ing, and best of all, from the logo to the pastures to the art, it’s a clearly loving homage to Suikoden. Looks like this one is destiny.