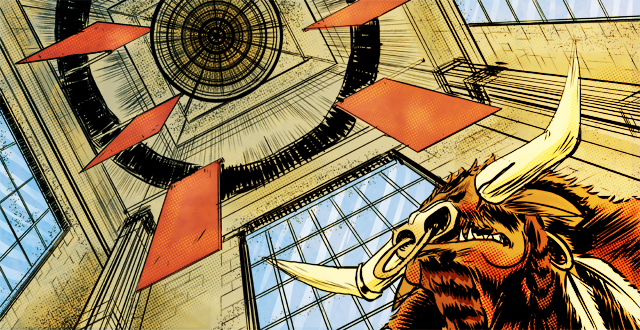 In my wanderings around the world of Azeroth in World of Warcraft I am struck by how similar the virtual buildings are to real ones.  The Highborne ruins that litter the shores of Azshara and the forests of Feralas resemble ancient Greek temples with their columns and Roman temples with their domes. The cathedral in the center of the Alliance Human capital of Stormwind resembles a gothic cathedral. It’s not unusual to see familiar buildings in videogames: Eternal Darkness features Amiens cathedral, and the Assassin’s Creed series features many real structures from the Middle Ages and the Renaissance.

I am perplexed, in particular, by the architectural style of the tyrannical religious organization the Scarlet Crusade in World of Warcraft. The Scarlet Crusade seeks to eliminate all Undead, Forsaken (Undead with consciousness), and Scourge (zombies) sympathizers from Azeroth. It consists of Paladins and Priests, worshippers of light, who kill first and ask questions later.

The Scarlet Crusade’s bases of operation include the Scarlet Monastery in the Tirisfal Glades and the town of Tyr’s Hand. The path leading to the Scarlet Monastery is surrounded by trees with corpses hung from their limbs. And in Tyr’s Hand there is a large cathedral with a single tall spire. The high spire suggests Gothic architecture, such as Salisbury cathedral (1220-1258 CE), which has the highest church spire in the United Kingdom. Gothic architecture is characterized by light, height, and weightlessness: Cathedrals are flooded with a spectacular play of light and color through large stained-glass windows. Height is achieved through tall spires, pointed windows, and vaulted ceilings that seem to reach into the heavens. The appearance of weightlessness is created by the light from the stained glass, the pointed aches, and the height of the building. Gothic architects captured a representation of God as light, teaching the population about Christianity and the universe without writing, since the majority of people were illiterate. But the Scarlet Crusade’s churches are not flooded with natural light, nor does the Scarlet Crusade have an interest in education.

Protection and survival through fortification is prevalent in times of conflict.

Gothic cathedrals were the center of the late medieval community. Guild meetings, education, tax payments, and trade discussions would be held there. The most educated people would gather to discuss theology and technological developments in relationship to Christianity, and the Gothic cathedral would become the beginning of universities. It’s also why many universities, such as Yale and the University of Western Ontario, have a Gothic revival architectural style.

The Scarlet Crusade’s mentality and urban planning do not fit with Gothic sensibilities. For one, the Scarlet Crusade has a separate town hall and often a castle, as seen in Tyr’s Hand and the base for the offshoot group, the Scarlet Onslaught, in Dragonblight in Northrend. They are hardly seeking enlightenment in their pursuit of genocide. Their cathedral, while having an impossible height and some stained glass, lacks the weightlessness of the Gothic. The inset stone buttresses that hold up the spire are very thick, making the cathedral look as though it could collapse from the strain. The 45-degree angle of the roof line makes these structures feel like they are squatting to hold the weight of the spire and towers. The stained-glass windows are only on the first floor, rather than reaching up to the highest point that would have created a wall of light. There’s no web of flying buttresses soaring along the sides of the building, or elegant drill work to decorate the outside. If you look up at the ceiling inside, you’ll see the Gothic crossing vaults to hold the weight of the walls and spires, but the space feels dark and closed rather than light and open. Which brings me to deduce that the building more closely reflects the predecessor style Romanesque, like Sénanque Abbey (1148 CE) and its preceding style, Carolingian, such as Charlemagne’s Palatine Chapel (ca. 9th century). Both are known by their heaviness, length, and fortification.

Protection and survival through fortification is prevalent in times of conflict. The Middle Ages were not always the bastion of education that would eventually lead to the Renaissance. After the Fall of Rome circa 476 CE, there was no central single political power, and there were hundreds of years of conflict and unrest in Europe. There was little architectural or sculptural development, since one can’t create heavy structures when there is little political stability. Survival became the sole aspiration, not artistic or architectural development. It wasn’t until the crowning of Charlemagne on Christmas Day 800 CE and the start of the Carolingian Renaissance that the world started to have a semblance of sanity.

Cathedrals of early Middle Ages served their part in town defense, and were heavily fortified. In The Elder Scrolls IV: Oblivion you see the towering presence of cathedrals in each town. In Oblivion it’s the place where players buy and learn healing spells. While the cathedrals are very tall, like a Gothic cathedral, they come to be used as bases of defense and refuge in places like Kvatch, where the people hold themselves inside the cathedral waiting for rescue. In World of Warcraft the Scarlet Monastery is tucked away in the hills—which isn’t unusual for a monastery, but it does allow for a strategic advantage, allowing the Scarlet Crusade to see all incoming forces. However, it’s impractical to have stained glass in a defensible cathedral, because “the glass is gonna break,” and the enemy will come in through the windows. Amazingly the windows don’t break in the siege of Kvatch (magical protection is a likely excuse) or the Scarlet Monastery, but they do in Eternal Darkness’ Amiens cathedral. In games we enjoy the elegance and beauty of a Gothic cathedral, but we use the cathedral as a defensive structure, and that’s not an inherently Gothic trait.

The Scarlet Crusade needs fortification rather than embellishment. Neither the Horde nor the Alliance sides with the Scarlet Crusade. The Horde attacks them as a threat, and the Alliance sees them as fanatics who have gone mad. Romanesque and Carolingian cathedrals have survived hundreds of years; some were renovated into Gothic cathedrals. Both the Romanesque and Carolingian styles had few windows, in part due to a lack of architectural knowledge, and in part for defense. Architects stopped making buildings out of wood, and turned to stone as a primary material, since it would not burn in either an accident or a conflict. Because of the heaviness of stone, there was not height, but instead length. Slowly, as the European world stabilized, the further study of mathematics allowed for the creation of vaults, pointed arches, and flying buttresses for taller cathedrals.

The architecture of the Scarlet Crusade is ridden with chaos and madness similar to a pre-Charlemagne Europe. Its buildings are inspired by the serenity of light provided by stained glass, but this contrasts with their brutal fortification. The cathedrals are tense structures: reaching for the impossible height of the heavens while under the crippling pressures of war and fanaticism.