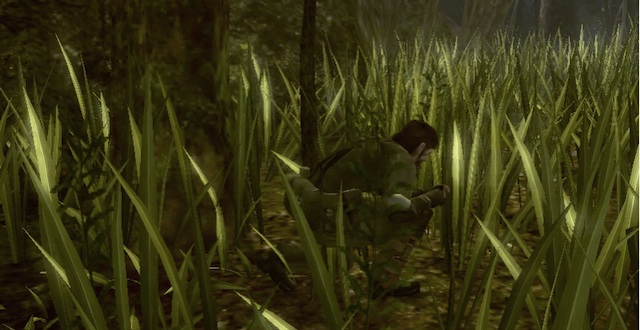 If we think of videogames as possibility spaces, we have to acknowledge that all constraints put on them are arbitrary. We create genres with traditions and standards to alleviate the burden of having start from scratch every time: This is historical fiction, I can’t put space aliens into it! That isn’t a worthwhile answer, but it’s one that helps suppress the overwhelming possibilities that must confront a creator at every turn. In art everything is possible at every step, and creating it can be seen as a struggle to keep all those random possibilities away for as long as possible—to preserve an illusion that each new invention threatens to subvert.

Hideo Kojima has described his work in the Metal Gear series as a process of making the impossible possible. When he designed the first game for the MSX2 in 1987 he had wanted to make a combat game, but he found the technical limitations overwhelming. The machine could only render eight sprites at a time. Kojima insisted on doubling each character sprite to add a sense of color and detail, but with Snake and two enemies onscreen, there was only enough memory left for two bullets. Because that did not seem an ideal formula for creating action, he settled on making a hiding game, one where head-on confrontations would lead to failure.

Kojima has remade this game six times since 1987, with each iteration adding something new to the formula: some as basic as character shadows and location-based damage, and others as drastic as switching to full 3D. Metal Gear Solid: Snake Eater 3D brings a modified version of the fifth Metal Gear game to the Nintendo 3DS. Like all Metal Gear Solid games, Snake Eater is a ragged tussle between cinema and sneaking, each stepping over the other like a militarized Laurel and Hardy.

Snake Eater is a movie before it’s a game. In its first 30 minutes I did one thing: climb a tree to fetch a backpack caught in one of its branches. This took two minutes. The other 28 minutes were spent watching animated characters talk to each other about a mission in the jungles of central Asia. Set in 1964, players control Naked Snake, a man who would later become Big Boss, the villain in the original MSX2 game, and whose clones would become Solid Snake and Liquid Snake in the first Metal Gear Solid for the PlayStation (there was also a third clone who was elected president of the United States, just before turning into a super-villain for Metal Gear Solid 2: Sons of Liberty). Naked Snake is a CIA operative on a mission to extract a Russian nuclear scientist who’d defected to America, been kidnapped again by the Soviets, and is currently being forced to develop a bipedal tank capable of firing a nuclear missile, the prototype for the series’ dread Metal Gears.

It is less a sensual and thematic experience than it is a formal experience, a self-conscious idea translated into a set of rules.

Naked’s mentor, The Boss, an expert in close-quarters combat, is also along for the mission. After Naked parachutes into the jungle, climbs the afore-mentioned tree, sneaks past some alligators, and finds the missing scientist, The Boss mysteriously defects, taking two nuclear warheads with her. She turns on Naked, breaks his arm, and ascends with a supernatural villain called Volgin, a Russian Schwarzenegger with bullet-spiked knuckles and a body filled with electricity. All of this gets you to the game’s opening title screen, a beautifully hallucinogenic montage of snakes morphing into women, morphing into missiles, morphing into more snakes—an especially beautiful effect on the handheld device’s 3D screen.

Kojima’s cut scenes are the cinematic equivalent of a cover band trying out a new variation on a familiar standard, borrowing heavily from the dramatic zooms, dutch angles, slow-motion action shots, and extreme-angle portraits of characters made so large they become almost mythological. The story told with these auteurist sleights of hand is, at first glance, wildly inventive and free of the genre constraints. If Kojima wants there to be a bad guy who shoots bees from his arms in his alternate-history Cold War drama, why shouldn’t there be(e)? Yet, there is still a palpable restraint to the storytelling—Kojima is revealing a conspiracy that never stops unfolding, and yet will not abandon the seriousness of the Cold War setting even when the bees start flying.

Every new left turn, every new double cross, every supernatural indulgence, is used to postpone the arrival of a final explanation. The filmmaker David Lynch’s surrealism allows each inventive turn to literally dismantle the entire plot, a lesson beautifully learned by developer Goichi Suda in Killer7, a game that seems to be eating itself as it progresses. But Snake Eater ties its inventiveness to the leaden premise of imminent nuclear war, a threat that is never allowed to become unserious, even while the people making it pirouette around one another in bikini tops and plumes of lightning.

When Kojima allows you to play during the cut-scene intermissions, the game retains its simultaneously complex and stodgy qualities. Kojima compared his original Metal Gear design to Pac-Man; and Snake Eater can be thought of as a 3D version of it, taking place in a jungle without the rectangular walls to constrain the hunt. The objective is to simply move from the beginning of an area to the far end while remaining unseen by the soldiers stationed throughout the jungles, caves, labs, and mountain cliffs you’ll creep through. In each environment you can adjust Naked’s camouflage and facepaint to better blend into the natural backgrounds as you lurk, something that’s expressed as a camo percentage to avoid confusion.

A huge number of tactics are available for Naked’s sneaking. You can shoot soldiers with a tranquilizer gun, kill them with machine guns, lure them with a well-placed naked-woman magazine, or trick them by tapping on a wall to draw their attention. All of these possibilities are constrained by a stamina system requiring Naked to periodically eat something to keep his energy up. If his stamina drops too low, his stomach will start growling and his movement speed is dramatically slowed. So then, you can also hunt food to stow in your backpack, killing snakes, rats, frogs, alligators, crabs, and sundry flora found throughout the jungle.

Even with all this variety, the game controls in a way that feels hyper-formal. Naked has three stances: standing, crouching, or crawling, each of which requires a button press to switch into. Attacking involves holding down the left shoulder button to bring up a weapon, and pressing the right shoulder button to use it. The lovely animations that transition Naked between these states are so detailed they create a slight delay, making it feel like the whole game is played a half-second out of sync. The effect is truly jarring in contrast to the fluid action in the cut scenes, where Naked can somersault over bullets and survive nuclear radiation. When players have control of Naked he takes his precious, awkward time going from a squat to a stand.

In art, rationality is nothing more than a parlor-room indulgence.

Snake Eater‘s most memorable moments are its boss encounters. The most renowned of these is The End, an old man in a ghillie suit with a parrot on his shoulder. The fight takes place in four large and interconnected jungle arenas, with The End hiding, basically anywhere and everywhere, while periodically firing a shot at you with his sniper rifle. The tension derives from how overwhelmingly difficult it can be to find him. You can use a directional mic to listen for his raspy breath, wear thermal goggles to pick out his footprints in the underbrush, or crawl around on your belly hoping to catch a glint of sunlight reflecting off his sniper scope. The fight is overlong even when you know what to do.

During my first experience of Snake Eater, when the game was originally released for PlayStation 2 in 2004, I spent more than four hours crawling around looking for The End until I was finally able to drain off his health bar. It’s hard not to respect how massive a gamble this is—a boss fight that is either enthralling, or game-breakingly tedious and overdrawn. It is less a sensual and thematic experience than it is a formal experience, a self-conscious idea translated into a set of rules. The encounter never quite comes to life thematically, but is impressive mostly as a concept, an experiment in how much you can ask of players—something that makes sense intellectually, but feels like a mess as an actual experience.

The final confrontation with The Boss is also a fine idea that heaves with a start-stop formalism. After unspooling the long, random story about why she defected, and how her choice to turn on her former allies wasn’t actually a turn to villainy, Naked still has to fight her using the hand-to-hand combat techniques she trained him in. The fight takes place in a grassy opening with white flower petals falling through the air, a senseless aesthetic embellishment not unlike John Woo’s propensity to add a flock of doves to a scene for effect alone. There is something strangely forced about the encounter, since both Naked and Boss realize they are not natural antagonists.

There is no good reason they should fight, and yet, they must fight because it’s the end of the game and there needs to be a fight and something to do with all those rendered flowered petals waiting to come tumbling down from the rafters. And so you’ll guide Naked around in a grassy circle with the subtle delay beneath all of your commands, periodically hit the punch button when you get close enough to Boss, listen to her tragic lament about living in an unjust world where she can never be the hero—a fair complaint from a smart woman in the military in 1964, and one that deserves a better response from our protagonist than karate chops.

This fight is characteristic of everything in Snake Eater—surreal and indulgent, while still managing to feel stodgy and formal, willing to let its characters go to ludicrous extremes but unable to let go of the seriousness of the playground on which they are tussling. The game is beautifully experimental, a work whose ideas should feed on one another to the point of eroding the entire structure they’ve been used to build, a proof that, in art, rationality is nothing more than a parlor-room indulgence—a formalism that can be discarded in less time than it took to assemble. Snake Eater is a baroque mess, a fugue of increasingly dissonant notes. It’s found its optimal form in miniature, a portable trinket whose self-serious formula keeps its vibrant new notes sounding as if they are forever off-key and out of time.