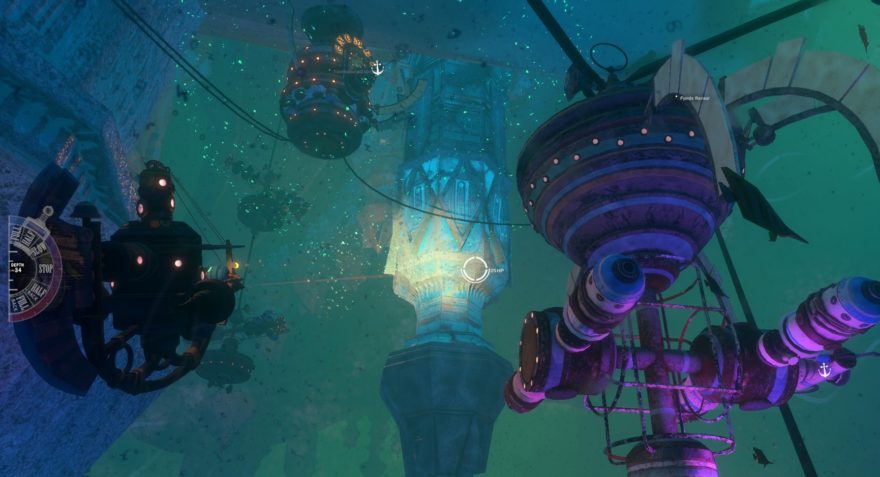 There’s something innately compelling about the sea. Perhaps it’s the sheer scale and lightless depths where life can still dwell, or the colorful beauty of its ecosystem. Or perhaps the idea of a thriving complex landscape that we simply can’t survive in is fascinating to us. We, as a species, have worked out how to survive the heat of the Sahara and Mojave, the cold of Antarctica and the Arctic, the oppressive jungles of the Amazon and Congo, and even on the ocean’s surface—but living beneath the waves is still reserved for fiction.

Combine that fascination and fear with architecture usually reserved for the surface, as seen in BioShock‘s (2007) Rapture or SOMA‘s (2015) Pathos-II, and places that would seem pedestrian on land gain a haunting presence, an aura of “this didn’t belong here.” The world of Diluvion is one such place; a far-future civilization adapted to living under the surface, a society of submarines and submerged cities built among the ancient ruins of a familiar world, all of it inspired by the fiction of Jules Verne. And it’s now been announced that it’ll be yours to explore on PC this fall.


In Diluvion, mankind endures beneath the frozen surface of Earth, which was ravaged after some great calamity. Your place in this world is a submarine captain searching for relics and information on past civilizations. Spread across three regions with unique towns, factions, and discoveries, your ship brings on new crews and new equipment at ports, preparing your vessel for the dangers of the deep.

The lightless depths are no less dark and alien here

The new trailer showcases the ever-lurking threats of pirates, fierce creatures, and otherworldly oddities like ships scuttling along the seafloor on crustacean legs, threats waiting to annihilated with broadside combat and evasive maneuvering. You can manage the real-time thrill of these fights in 3D, but can also switch to a hand-painted 2D look to get a cross-section of your vessel. From here, the game more closely resembles FTL (2012), as you flick between each room and attend to your crew’s needs.

Outside of combat, Diluvion will give you the freedom to explore its distant era of ruins and submerged civilization in full 3D, where anomalies and deep-sea fauna await in the ravines and canyons. The lightless depths are no less dark and alien here, requiring special sonar and scanners to navigate effectively.

Diluvion is slated for release this fall on Windows and Mac. More details are available on the game’s site and Kickstarter page.