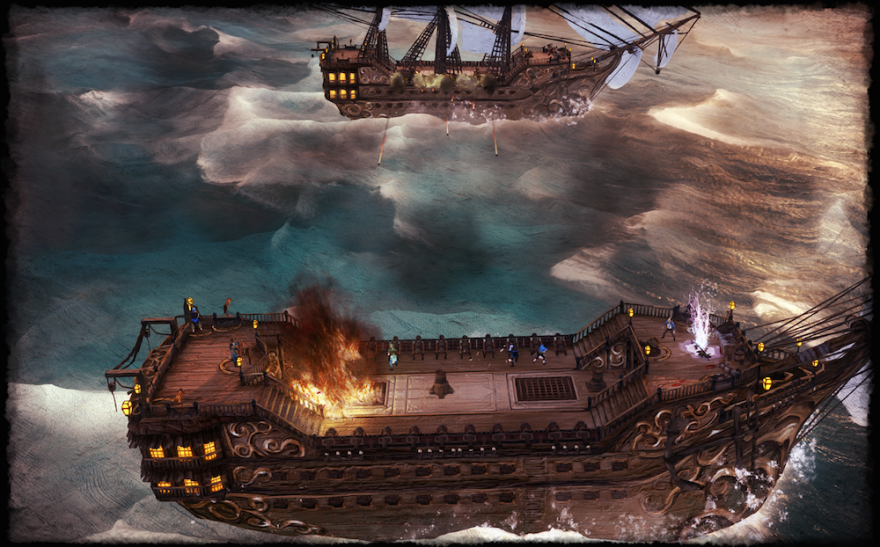 The brave elegance of ships at sea has fascinated artists since humans first took to the waves. The “Age of Sail” from the 16th to mid-19th century lifted maritime art to new heights, when sea battles, storms and huge, proud ships made naval painting its own genre. Collections like the National Maritime Museum have hundreds of such paintings, many of which were commissioned by naval officers or by private collectors with an affection for the subject.

A few games have attempted to take to the sea, like the aptly named Age of Sail (1996), Sid Meier’s Pirates! (2004), or the more recent Assassin’s Creed IV: Black Flag (2013), but none have yet looked to the beauty and power present in maritime art for visual inspiration.

This is where Abandon Ship comes in. British studio Fireblade Software has received a grant from the UK Games Fund—the same people who are funding procedural fairy tale generator Forest of Sleep—to create a naval combat game that looks like an oil painting. They’ve taken cues from Sunless Sea (2015) and FTL: Faster Than Light (2012) and aim to combine tactical battles with sea exploration, all while enduring harsh weather and encountering random events on a vast, procedurally generated sea.

If your ship is destroyed, you are able to start anew

In a unique take on permadeath, the game is tied not to your ship, but the character you play as Captain. If your ship is destroyed in battle or in a storm, you are able to start anew—assuming you can haul yourself out of the ocean and into a port. Perhaps you were lucky enough to disembark on a lifeboat before your vessel met a watery grave. Or maybe you’re stranded in the sea, but you see a boat in the distance and they rescue you before you can drown. Random events will take place whether you’re in a lifeboat or stranded, and if you’re able to make it back to dry land, you can build up a crew and take to the water once again.

As long as you’ve got a ship, you can explore. The sea is wild and dangerous, but that’s what makes it so enticing. The grandeur and mystery of a ship finally breaking its way out of a storm was irresistible to J.M.W. Turner and Ivan Aivazovsky, and it’s that same sense of wonder that has led to the creation of Abandon Ship.

You can see the first screenshots of Abandon Ship on their website.