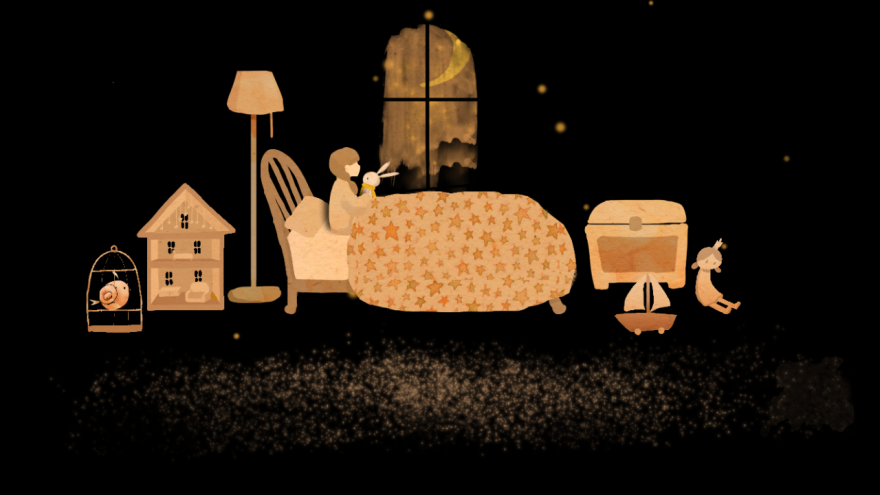 If you ever had a favorite stuffed animal as a kid, you had one or two close calls where it was left somewhere a little too long and forgotten. Most of the time, an eagle-eyed parent would spot it and rescue it from the corner of the laundromat, or the rental car. Other times, it wasn’t so lucky, and sleepless nights would be spent until it was retrieved from its hiding place or a suitable replacement was found. Now take that childhood dependency and switch it around.

Emma’s disappearance weighs on him

White Lie, the debut project from Ambize Studio, focuses on a stuffed toy who has lost his owner. Greg, a plush rabbit, wakes up from a nightmare only to discover that Emma, who he has spent his life alongside, is gone. He explores a ghostly limbo populated by the memories of their life together, and journeys on a quest to discover where she went.

So far, it looks like the game will mix beloved children’s tales like The Velveteen Rabbit (1922) with the uncanny, resembling the dozens of Alice in Wonderland (1865) adaptations that have given an old tale a dark twist. It keeps a sweet illustration style and muted colors, with the rabbit wandering around a shadowy landscape as Emma’s disappearance weighs on him. It’s a simple point and click originally designed for iOS that will have some element of puzzles, as explained on the creators’ devlog, that will progress the story at key points.

For a game that’s only been in development a few months, the first teasers are looking gorgeous, and the website provides an illuminating look into how much progress is being made behind the scenes. There’s no time frame for release but you can expect White Lie to be arrive Windows, Mac, and Linux, as well as iOS, and since the team was recently accepted into the Core Labs acceleration program, Greg should hopefully be finding his way back to Emma soon.

Keep up with Ambize’s work on White Lie at their website or on TIG Source forums.