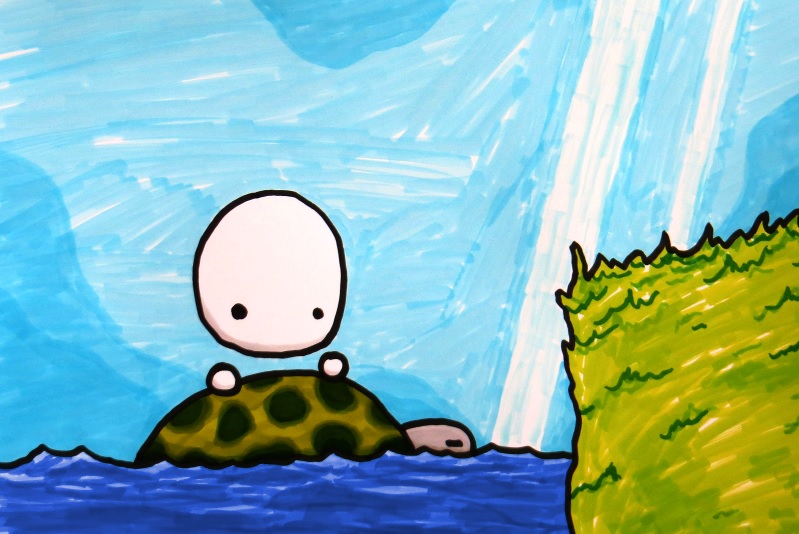 Gebub’s Adventure forces players to look past the origins of the creature they have been given control of, instead looking forward at the game’s world and secrets.

Created by John Wallie, Gebub’s Adventure is a “peaceful adventure game” that will send the titular Gebub on an exploratory journey through a strange world, meeting its characters and creatures along the way. The game’s simple, minimalist art style is something Wallie referred to me as “MS Paint method,” inspired by the game Seiklus (2003), and a style he has iterated on heavily in the past. “Experimentation is what has led me to develop the different graphical styles that I use,” he said.

Wallie’s games all share a sort-of innocent quality to them that the art style—deliberately evoking a child’s first experiments with paints—helps to inform. For example, Gebub cannot die, though Wallie says this kind of decision isn’t something with any great intention or thought philosophy behind it. “I’ve just been making things that I feel like making,” he said.

But perhaps his personal faith— Wallie referred to himself as a Christian developer—has helped create this effect. “I suppose my faith in God has had an influence, although I’ve never been conscious of it,” he continued. “Perhaps one aspect that shows in my games is that I never use anything that is [not safe for work], I don’t think games need stuff like that.”

Wallie has currently taken Gebub’s Adventure to Kickstarter in an effort to fund a score, written by Marius Masalar, a graduate of the Berklee College of Music. “I’ve felt from the beginning that the game called for an orchestral soundtrack, especially with piano,” Wallie said. He is asking for $3500 in total.

You can keep up with Gebub’s Adventure’s development on Wallie’s development blog. You can also check out his freeware games and follow him on Twitter.