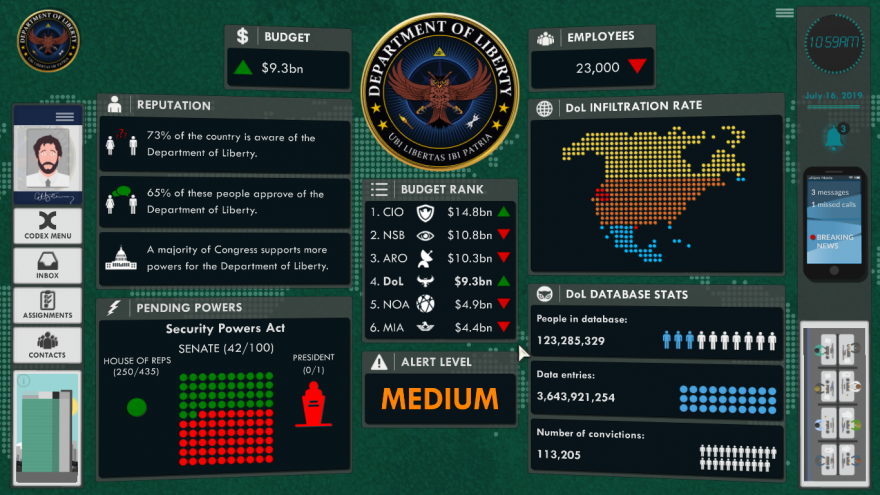 What would you do with the national security (read: espionage) apparatus at your fingertips: Would you defend civil liberties or use the reams of information collected each day to satisfy your own ends?

Need to Know, the debut title from Australian developers Monomyth Games which is raising funds on Kickstarter as of today, is in large part concerned with this question. You play as a worker in an intelligence agency and your decision to prioritize either the greater good or your own shapes the game’s narrative structure. The game, however, is not really about you, the intelligence worker. It is about the collection of data. No human could be the protagonist of this story; we are all just holding on for dear life.


The Kickstarter trailer for Need to Know is narrated using an excerpt from cybersecurity research Dan Geer’s 1997 speech to the House of Representatives Subcommittee on Technology. Post-Snowden, 1997 may feel like a more innocent time, but Geer’s speech still feels very much of our time. If you didn’t know better, you’d think the narration was written just for this trailer. It’s not like Geer subsequently changed his tune. In 2014, he told attendees at the cyber security conference Black Hat USA:

“Every speaker, every writer, every practitioner in the field of cyber security who has wished that its topic, and us with it, were taken seriously has gotten their wish. Cyber security *is* being taken seriously, which, as you well know is not the same as being taken usefully, coherently, or lastingly. Whether we are talking about laws like the Digital Millenium Copyright Act or the Computer Fraud and Abuse Act, or the non-lawmaking but perhaps even more significant actions that the Executive agencies are undertaking, “we” and the cyber security issue have never been more at the forefront of policy.”

If nothing else, cyber security has never been more at the forefront of videogames. The uncanny aspect of Need to Know’s trailer is that there is now a language around games involving security bureaucracies. The protagonist works at the Department of Liberty. You’ve seen this sort of Orwellian doublespeak before—and not just in Orwell. Likewise, the game’s visualization of an ominous bureaucracy shares a fair bit in common with Papers, Please (2013)and The Walls Have Ears (2015).

None of that is really a knock on Need to Know. Its trailer has enough verve to suggest that the game will add something to the genre. Yet the existence of this genre and, more specifically, a series of associated visual and linguistic tics, says more about our society than any individual game. After Edward Snowden (who lurks in the background of Need to Know’s entire plot) the basic complaints about domestic surveillance have coalesced to the point where they can be introduced using shorthand and quick nods. We need to talk about these matters in more depth, but Need to Know is not wrong in noting that versions of these discussions can often happen without saying all that much.

You can find out more about Need to Know on its website.