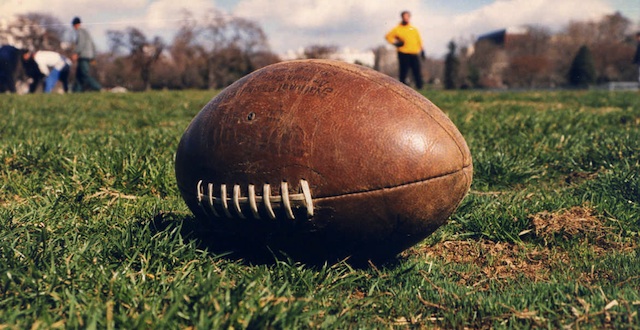 What do American football, Street Fighter, and Whoowasit? all have in common?

In spite of our young boisterous celebration of videogames here at Kill Screen, we often forget or ignore the fact that games have been around a lot longer than Pong. Game designers have not forgotten that.

And while I recognize the heritage of videogames I have to admit I was a little surprised at the lineup, and in particular, the opening panel by (apparently) famed boardgame designer Reiner Knizia. After this year’s No Quarter exhibition in the same space, I was expecting a videogame conference. My first reaction was “boardgames, really?”

My ignorance represented a very small minority. Everyone I talked to was thrilled that Knizia was there. “He’s a legend in the boardgame world. A genius of game design,” one attendee exclaimed, incredulous at my ignorance. His smash hit Ingenious is on track to being one of the best-selling boardgames of all time.

Game design, not moving parts or flashy graphics, nor sculpted objects and joysticks. Just the “why” of games, and subsequently, the “how.” Practice is a prototype conference that bridges the gap across multiple game formats—boardgames, videogames, and even sports. Game designers recognize that their craft is particular, and the requirements of designing great games are ubiquitous in all interactive entertainment.

“We wanted to get a group of high-level professionals who were going to talk about the nitty-gritty of the actual practice of game design,” explained Eric Zimmerman, one of NYU Game Center’s professors.

Games are broken, and turned into other games. So soccer becomes rugby becomes football.

The atmosphere was stimulating and excited. A sense of relief was palpable. Finally, game designers were able to convene free from industry chitchat and marketing nonsense to talk games. Instead of answering the pithy “are games art?” question, the discussions remained focused on the essential—defining the core practice of designing games.

The conference included panelists ranging from Knizia to blockbuster title representatives like Steve Gaynor discussing level design in BioShock. Most telling was the invitation to Rogers Redding, the national coordinator for officiating NCAA football, whose talk “The Game Design of Football” revealed how far-reaching game-design principles are.

Attendees felt a shock of recognition they experienced during Redding’s talk, as the similarities between football and role-playing games are striking. During the question-and-answer period, Redding highlighted the difficulty of maintaining the safety of players as athletes became more powerful. One person suggested “nerfing that particular class of player’s armor to add more weight.” Redding, taking the question in stride, agreed, but then noted “it’s not in the style of the game to artificially limit the physical prowess of the player.” Others chimed in, agreeing that it was important to let player styles and attributes manifest during the game.

On the previous day, a rowdy discussion about competitive Street Fighter had echoed a similar sentiment. “When we tested a modification to Zangief, the effect was better for the match, but worse for his character. I kept thinking that’s an un-Zangief thing to do; why is he doing that?” remarked famed competitive player Arturo Sanchez. “Ultimately, there is a flavor to each character, and oftentimes, that style is what makes Street Fighter Street Fighter. Sometimes game balance isn’t the most important thing,” Capcom designer Seth Killian said.

One standout session, “Open Problems,” had attendees come onstage to discuss game-design problems. One attendee asked how best to create a game for attendees at a conference that was simple and got everyone involved. Someone suggested a live action version of Conway’s Game of Life, a famous rule set created by the mathematician John Conway that paved the way for the study of cellular automation. People nodded in agreement; I was positively lost until someone next to me explained it. The attendees debated how feasible it was, with the presenter noting that Conway’s Game of Life requires a clearly structured grid, whereas the conference would have ragged seating. The irony of that statement was lost amidst the bubbling of potential solutions, manipulations, and suggestions.

And if game design is a series of rules, then math is the father of all game design, and so programming is our Noah. This held true for many at Practice, but not for some. During “Game Design vs. Programming” with Nick Fortugno (CCO of Playmatics), Manveer Heir (senior game designer at BioWare Montreal) and Chris Hecker (designer on Spore) had a heated exchange concerning the importance of programming. Hecker stressed the importance of knowing how to program, because “You have this vision in your brain and you need to create it; knowing how to program means not having to entrust that vision with others.” Nick Fortungo countered, “Everything can make me a better game designer; programming is just one of them. I look to creating games as a collaborative creative process, not a singular one.” Heir saw it “as a necessary evil; I don’t want to do it but I must.”

The underlying question of how best to make a game has no real answer, of course, because games are not aspiring for any singular perfection (yes, I’m going there)—they are imagined, imperfect creations filled with bugs, glitches, and beautiful serendipity. Games are broken, and turned into other games. So soccer becomes rugby becomes football. So Mario Bros. becomes Super Mario World becomes Super Smash Bros.

If anything, debates and discussions of this nature highlight how young and fresh games are, in spite of their thousands of years of history. “The CPU, in all its abilities to process algorithms and render realities, has unleashed the potential for games with complex and intricate structures unlike ever before,” Hecker noted. “Videogames are in a place now that movies were circa 1905.”

In the beginning there was Lizzie Maggie’s The Landlord’s Game, and then Charles Darrow sold it as Monopoly.

Game design is a remarkable exercise. In effect, a designer conceives of a series of logical structures and rules that are then enacted by participating players. Street Fighter is a game wherein you must hit buttons to beat the other character before she beats you. But from that simple premise come the human expressions and imperfections that make games powerful. Redding notes, “Football is a simple game: move the ball down the field and try to cross the line with it; but we’ve built thousands of pages and conversations to decide just how people will enact this, and people’s lives are devoted, sometimes tragically so, to bearing witness to those enactments.”

When we play, we put aside other worldly considerations (sometimes fatally so), and for a period of time, enter a new world where their actions are confined to and expressed by the structure of the game. In their expressions of mechanics, behaviors and styles, game designers are world builders, gods of the board or screen.

And if game design is a series of rules, then math is the father of all game design, and so programming is our Noah.

Indie darling Minecraft is so often trumpeted as a beacon of game potential because of how complex and expressive the game lets players be. Avatar‘s Pandora may create envy and yearning for a different world, but great games are as close to the back of the C.S. Lewis’ wardrobe as we can get.

But even as game designers play god, creation is sometimes the last point of control. Jesse Fuchs noted in an Open Problems presentation about the history of Monopoly that games and their iterations take on new meaning and culture as they continue to be played. “My problem is that Monopoly was once a pretty good game, whereas now it’s just poor version of that. Do we care? Does Lizzie Maggie’s legacy deserve more?” he asked the audience. Games may start as worlds unto themselves, but given enough culture and activity, begin to take a life of their own.

We talkin’ about Practice? Not a game, but Practice.

Margaret Robertson, the development director for Hide&Seek and acclaimed writer on game design, ended the round of panels with a recap of the panels and their vantage points on game design. “We finally have everyone in a room, and we all speak the same language of game design,” she opened. Her short presentation was a summation that each panelist represented a distinct approach to game design, and that each one was entirely valid. “Long may all of us have different pie charts on our levels of interest and expertise in each aspect of game design,” she quipped, referring to the debate between Hecker and Fortungo.

I’ll attempt to sum up her presentation here:

Game designers can be inventors, creating new processes and structures. They can be thieves, appropriating concepts, material, and ideas from other genres and influences. They can create sparks as an invisible hand that yields most control to their players. They can be perfect mathematical systems with near-perfect balances. They can be like chefs, precise and procedural, but with a flair for the creative and organic. They can be like bull riders, unleashing a powerful experience that is only somewhat containable. They can be creators of spectacle, for others to bear witness, like in sports. And they can be stewards and historians, preserving heritage and celebrating the narrative of game design.

At the end of the conference, Eric Zimmerman and Frank Lantz asked for feedback. One person questioned the name of Practice. Zimmerman shed light on the name: “We here represent practitioners of game design. That is our profession.” Practice is the art of repeatedly doing something with the aim to improve upon it. For game designers, the “how” and “why” of games are not just the means to the end product of a finished game. Practicing game design is what defines it.