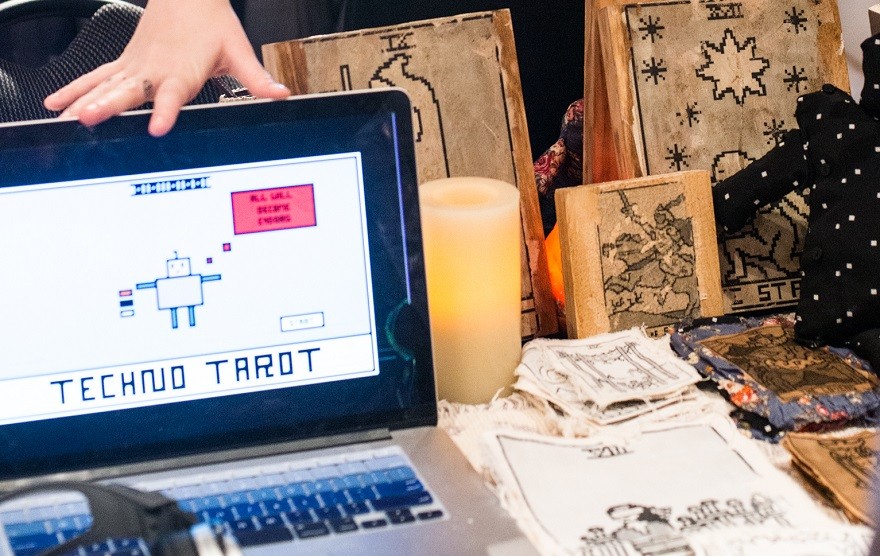 In Glitch Art Historie[s], New Media artist Nick Briz compares the rise of glitch art to the development of Dadaism in the early 1900s. “Dada was a response to the paradigm shift of the industrialized WWI,” he writes. According to Briz, “The digital/information revolution is (could lead to) a paradigm shift of its own,” with glitch art offering a way of questioning the “idealized stability” of that revolution. In an age of new technologies are reshaping every facet of our lives, and the omni-present Internet archives and sorts everything anyone ever imagined, glitch art helps us re-discover the chaos hiding inside it all.

A self-described “techno mystic,” artist Kara Stone, who will be speaking at Kill Screen’s Two5six Conference in May, does something similar with her work. In Techno Tarot, an 8-bit robot tells the players fortune. While it’s a set program that determines which cards are drawn, it’s hard not to get taken in by the possible futures it foretells. As Leigh Alexander recently reported, “Stone originally conceived Techno Tarot as an intentional criticism of our unquestioning faith in computers.” However, to Stone’s surprise, “Users were thrilled by the accuracy of their readings,” writes Alexander, “and found as much meaning in the randomly-assigned digital cards as they might in a real face-to-face reading with a practitioner.”

Using programs to foster uncanny connections is a theme throughout much of Stone’s work, including other games like Medication Medication and Sext Adventure. The first seeks to make a user more aware of her body, encouraging participation in rituals related to coping with mental illness, while the second tries to facilitate a relationship through scripted exchanges of salacious messages. In both cases, the art tries to get people to reflect on how they relate to themselves and others.

According to Kill Screen contributor Carli Velocci, who reported on Sext Adventure last fall, the goal of the game is “not to give people the opportunity to sext with a robot of their choice, but to instead let the player explore what that kind of relationship would be like, separate from the sexual aspects.” While dating platforms like Tinder and OkCupid are making intimacy between strangers more transactional, Stone is asking what it would mean for a budding relationship if the prospect of acting on it physically were removed from the equation.

In the last five years alone, Stone has assembled a formidable body of work, including her latest: Feminist Confessional. Two5six, a three-day celebration of a life well-played, will take place Friday, May 15 through Sunday, May 17 at Villain (50 North 3rd Street) in Williamsburg, Brooklyn. You can buy tickets here.