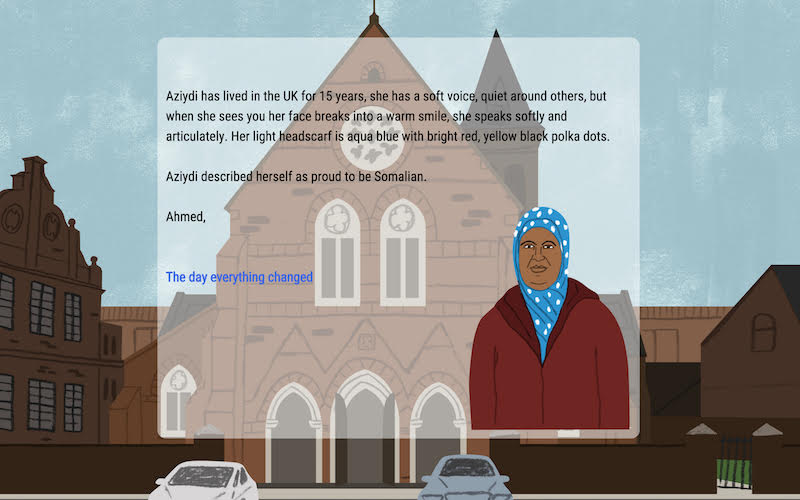 Teviot Tales is a game that shares the stories of residents living in the Teviot Estate in Poplar, London. Developer and writer Hannah Nicklin spent six months at the estate, exploring the nearby area and conducting interviews with locals. Alongside the poetry and game design workshops she ran during her time there, she also held one for storytelling, where she invited and encouraged people to tell whatever stories they wished to tell.

There’s Terry, who speaks of his time spent with his best friend John back when he was 12-years old, as they smoked Weights and listened to Temperance Seven records; Margaret, who always puts her bag on the seat next to her while riding on the DLR so she can imagine her husband sitting with her; and also Anisha and Aklima, who reminisce about their friend who passed away the previous summer.

what a modern, multicultural version of that tradition might be

Nicklin believes Teviot Tales represents the beginnings of a new way in which games—and the tools used to make them—can not only help to share unique stories about our lives, but to also engage others in order to get a new and different perspective on how they live. “We used to talk about ourselves in folk songs and story, and I like to try and work with people to think about what a modern, multicultural version of that tradition might be—how we connect with others, to think about who we are, and who we might be, together,” she said.

Twine, and the resulting ‘Twine games’—such as Teviot Tales—continue to be wildly popular due to the many diverse subjects creators decide to tackle. The open-source tool allows just about anyone to make an interactive, dialogue-heavy game, provided they have the desire to do so. If you have a story you want to tell, it’s quite possible you can make and share it with the world thanks to Twine.

Teviot Tales is set to release on PoplarPeople on May 2, 2016. Prior to its release, on April 29th and 30th, there will be a free two day opening exhibition for the game at The Teviot Centre in Poplar, London. Attendees will be able to play the game early, as well as see some of the writing, game design and stories that were produced during the various workshops.