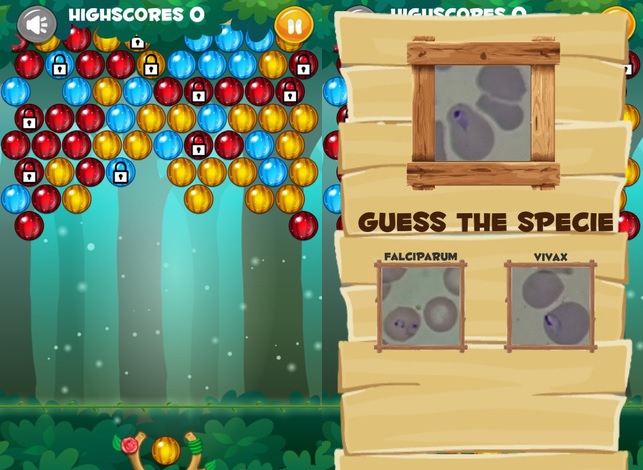 Viruses and diseases in videogames are usually the kind that turn you or others into a zombie. the Resident Evil franchise has over a dozen different viruses that all turn you into a dangerous mutant. The Last of Us (2013) had a virus that destroyed the world and caused some people to become mushroom-faced monsters. Few games focus on real world viruses. And even fewer games allow you to help fight those real world diseases. MalariaSpot Bubbles does both.

MalariaSpot Bubbles is a game created by a research group at the Technical University of Madrid. The game is part of a larger project that the group is doing called Spotlab. “We specialize in designing videogames to study how to apply crowdsourcing to medical images analysis to find new low-cost tools for telediagnosis.” Sara Gil, who is part of the project, explained.

In MalariaSpot Bubbles, the player is tasked with identifying different types of malaria strains. But players aren’t just looking at images of diseases, instead they play a bubble-popping game. After hitting certain bubbles they are required to correctly identify a strain of malaria. “We want to test if medical images can be collectively analyzed.” Gil says that as people play the game their answers are stored and analyzed. That data is being used to find the best and most reliable way to get accurate results from multiple players.

it could save millions of lives

So far, Gil and Spotlab have had a lot of success with the different games they’ve released. And if some players incorrectly identify the malaria strain, Spotlab is able to make sure these wrong answers don’t throw off the results. “The idea is that you merge results from several people that analyze the same image.” Gil explained, “That way the mistakes are not significant, because we have scientifically proved that in the case of MalariaSpot, 22 players tagging something as a parasite is a result 99.9 percent reliable.”

This process of using multiple players’ results to help identify diseases is being applied to other diseases, such as tuberculosis. “We have another game for tuberculosis (TuberSpot) and we have plans for other diseases, such as leukemia.” Gil and Spotlab believe that these types of “spotting” games can work for potentially any disease that can be diagnosed via images.  If Spotlab can perfect this crowdsourced diagnosing method it could save millions of lives.

Gil says the response from players has been very positive and enthusiastic. “Last year TuberSpot was reviewed in one the main Spanish videogames magazines and we had a great response from gamers.” And even though MalariaSpot Bubbles and the other games created by Spotlab are serving a greater purpose than fun, Spotlab still wants to make sure that their games are enjoyable to play. Striking this balance between fun and functional isn’t easy. “It’s hard to find that balance, but we think we are getting better at it.”

MalariaSpot Bubbles is available on the iTunes App Store, Google Play Store and you can even play it right now in your web browser. You can check out more games by Spotlab on their official website.