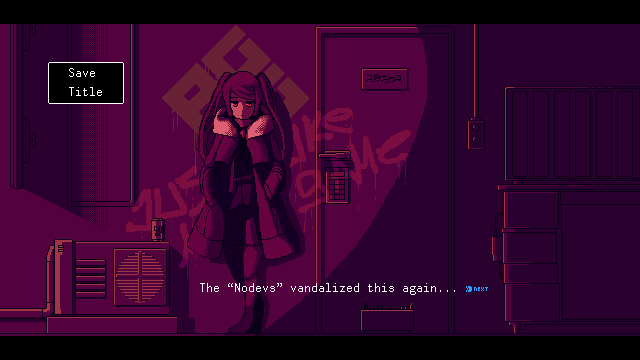 Every cyberpunk/sci-fi movie needs a bar scene. Whether it’s Star Wars or Blade Runner, this is where the protagonist (most likely a gruff white male) goes to find answers and pump regulars for information to help him succeed on his quest. These bar-goers, presumably drinking to forget their dystopian problems, act strictly as background decoration. Perhaps they come to foreground only to help introduce another main character, allowing him or her to look distinguishable in a sea of nameless faces.

Movies require the everyday individuals of their worlds to serve exclusively as wallpaper. Otherwise, the protagonist and other characters might seem less special for being actual humans with actual backstory and distinct characteristics. But buried in that nameless wallpaper lies a hidden treasure trove of perspectives that could reveal more about that world than any gruff male protagonist ever could.

So what if you could be a fly on the wall at one of these bars—or better yet its bartender? Imagine all the stories you’d hear, all the things you’d learn about the fictional world after listening to the everyday experiences of various individuals living in it.

While movies might not excel at this minute character exploration approach to worldbuilding, the cyberpunk action adventure/bartender simulator VA-11 HA-LL-A seems to have all but figured it out. On the surface, the game is simple. You serve a colorful band of bar-goers the drinks they order, quickly mixing the right ingredients and serving it to their specifications. But unlike Diner Dash and other management style games, the real draw of VA-11 HA-LL-A isn’t the mindless grind.

“This game is all about exploring what’s up with the characters that you always see in the background who are never fleshed out,” says Christopher Oritz, VA-11 HA-LL-A‘s art designer. From an anatomically correct android sex worker to a “Christmas Cake” female hacker, each individual that graces your bar-confessional divulges the untold story of life as an average, non-hero surviving a dystopian future.

“We try to make the player feel small,” adds writer and programmer Fernando Damas. “Rather than guide them through the basics of the plot before starting, we throw them into the middle of everything and give them the means of piecing together what’s going on. You’re thrown into an ever-moving world, and things won’t wait for you to happen. The characters all existed long before the player ever met them, and their lives go on offscreen. There’s a powerful feeling you get when you realize you’re in a place where you’re not in control of everything and there are things you just can’t change or avoid.”

“We try to make the player feel small.”

As evidenced in both the original prototype submitted to a cyberpunk jam and the recently released Prologue version, the result is a world that players feel compelled rather than obligated to understand. Instead of the “shake background characters by the ankles until they give up information” approach of the typical cyberpunk movie hero, VA-11 HA-LL-A provides players with an intimate exchange, revealing a multi-faceted world through a variety of conversations.

Though obviously more stylized and fantastical, VA-11 HA-LL-A’s worldbuilding recalls approaches like Her, providing details that are just random or obscure enough to paint a believable picture. By focusing on worldbuilding through everyday characters, both these worlds come alive in a way that neither Blade Runner nor Minority Report ever could. “Worldbuilding requires exposition, and I find it easier to remember things when they’re brought up in a casual manner and told in a readably human way,” Fernando explains. “Aside from making the whole world building a lot easier to swallow, creating it through the characters gives each character the opportunity to present a different stance or opinion on the matter. All in all, world building through characters makes finding out about the world more natural, and a lot less like sitting through a lecture.”

Fernando and Christopher go through painstaking lengths to create and fully explore their characters before even considering putting them on screen. While it usually starts with one of them thinking of a cool trait or occupation (which is then “more-often-than-not followed by the question ‘Can we make it a cute girl?’”), their detailed profile spans from imagining their family life to sleeping habits to what kind of pizza toppings they might prefer. “70% of these things aren’t mentioned at all,” says Fernando. “But it helps you build a mental image of the character, which ends up helping a lot when writing them. The individuality comes naturally.”

As a crowd and creator favorite, the briefly aforementioned android child sex worker Dorothy is a perfect example of that organic individuality that comes through in dialogue and design. Her typical, bubbly Anime little girl looks contrast her often lewd and pragmatic dialogue. At one point in the prototype, she even told me that her secret to getting clients to come faster is simply: cat ears.

As Christopher says, “for us, Dorothy represents a unique kind of independence. Sex workers in movies, video games, etc. only seem to show up whenever the writer needs an edgy character to make things feel more ‘mature.’ We wanted to keep her out of that trope.”

“We didn’t want some sort of shock value,” agrees Fernando. “We wanted to make a character that likes sex, and that’s completely unapologetic about liking it. She’s not a sex worker out of some contrived and tragic past—she’s one because she likes it and she doesn’t end up being less of a human (or a droid trying to be a human) for it.”

“She’s not a sex worker out of some contrived and tragic past.”

But robot sex workers with feisty personalities aren’t the only thing setting VA-11 HA-LL-A apart from other cyberpunk imaginings of the future. As developers hailing from Venezuala, Christopher explains that their vision of a bar scene in the midst of dystopia “is based in our experience of living in a third world country, where it’s natural to look for a place where you can be happy without the constant bad news.” With the country’s constant food shortages and seemingly permanent financial crisis, Christopher knew what it felt like to experience “a really depressing society, where everyone’s always sad and worried about their future in a country with no hope of recovering. So we came up with a set of characters who, in the middle of this disaster, try to go on with their lives and be as happy as they can with what they have.”

Like their developers, tenacity in the face of difficulty is a pervasive part of every character you meet in VA-11 HA-LL-A. Each one surviving through varying degrees of hardship, they describe their problems not with bitterness but with an undertone of perseverance. Fernando explains that while dystopias typically depict a Big Brother-esque downfall, their vision is less 1984 and more subtly bleak like Blade Runner. “You might say it’s a more optimistic kind of dystopia. You’re just a normal person living in an interesting future.”

Although there aren’t dialogue options, VA-11 HA-LL-A creates a storytelling experience that’s grippingly personal. If, like many game theorists argue, story should always act as a supporter to mechanics, then VA-11 HA-LL-A is the exception that makes the rule. There were many instances when story and gameplay worked seamlessly in tandum during my playthrough. Like when a conversation became so engaging that, when a customer interrupted it to order a drink, I sighed heavily and rushed through the order, not caring if I made the drink well or not. With such spectacular writing and worldbuilding, VA-11 HA-LL-A is a game that makes you ignore all your game instincts. One time, I even messed up an order on purpose, giving a customer way more alcohol than she asked for because I heard doing that might keep people talking longer and generate extra scenes.

You can download the free prototype, or pay the preorder price of $4.99 for access to the Prologue; either are worth it to check out its funky-futuristic jukebox tunes. You can ask Christopher and Fernando, who go by the studio name SUKEBAN, any questions through their devlog. They’re aiming for an early 2015 release on PC, Mac, Linux and PS Vita.