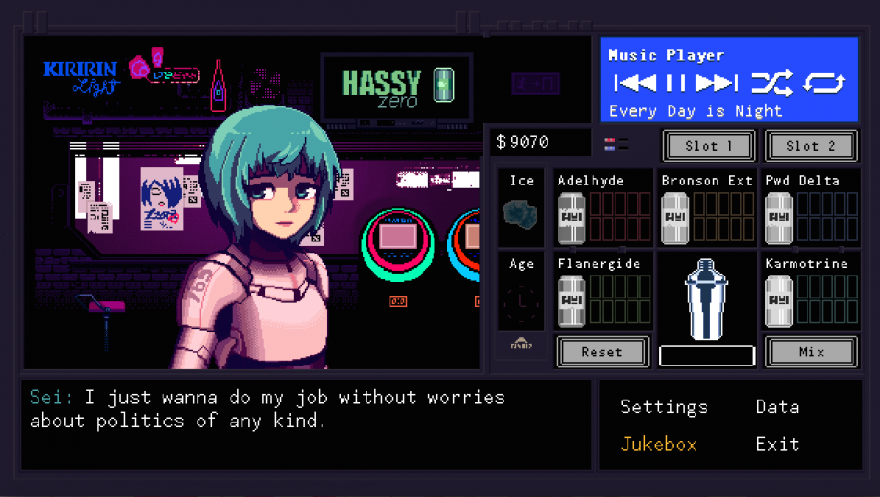 “Time to mix drinks and save lives.”

Jill lackadaisically jazzes herself up with this line at the start of every shift, unknowing of just who will waltz through the door. But what I soon find out is that Jill is kinda lost. The 27-year-old bartender resides in a run-down apartment, barely scraping by when it comes to bills, rent, and impulsive buys, like cute posters or a plant. Jill is lost in the same way that her regulars—patrons of the dive bar VA-11 Hall-A (colloquially called “Valhalla”)—are lost. She’s caught within an average life, with the only fulfillment she gets coming from the people she meets through bartending, and in caring for her pet feline Fore.

VA-11 Hall-A takes place in the cyberpunk post-dystopian city, aptly named Glitch City. It’s a city overwrought with crime, grime, hacking, and everything in between. Glitch City, quite simply, isn’t a pleasant place to live. It wouldn’t be outlandish to consider Cowboy Bebop’s (1998) Spike Spiegel resting in a nearby bar, annoyed with bounty hunting and trying to drink a Prairie Oyster in peace. Or the Knight Sabers of Bubblegum Crisis (1991), cruising around town, ready to battle. But for Jill and her two bar-keeping companions—the lovable schmuck Gillian and her ever-chipper boss Dana—Valhalla’s a second home. A departure from the outside abysmal reality. For a lot of its patrons, Valhalla’s an impromptu church, and Jill’s the confession booth. 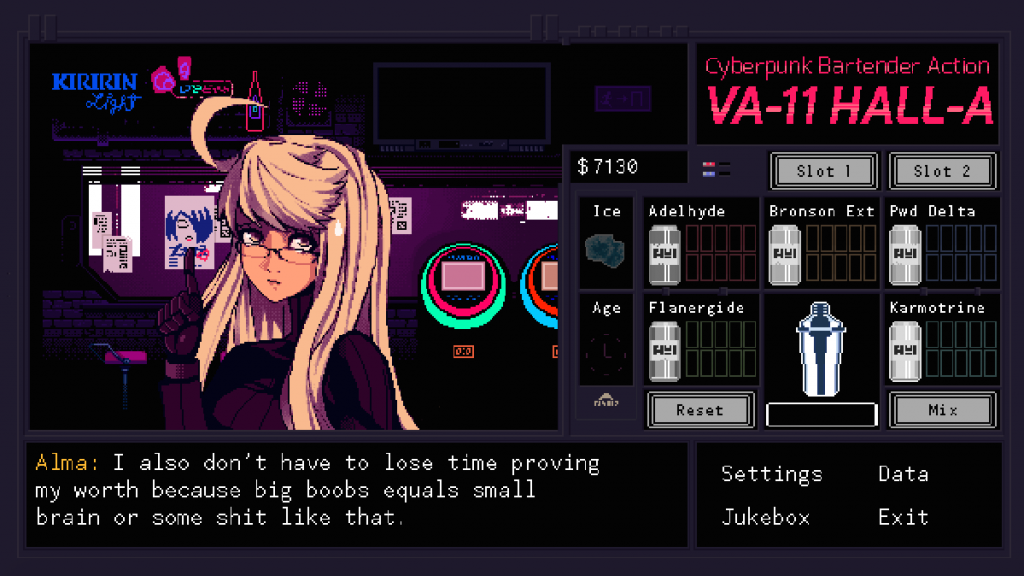 It is unusual, if fitting, for cyberpunk fiction to focus on someone like Jill. She doesn’t take drugs and she isn’t actively looking to stage a revolt; she’s merely trying to get by. It’s a perspective that allows VA-11 Hall-A to be entirely familiar, yet also in a position to subvert cyberpunk’s typical elbow rests in small but significant ways. Sure, it finds its footing in a bar reminiscent of the hacker-friendly Chatsubo Bar from William Gibson’s famed cyberpunk bible, Neuromancer (1984). And yeah, sometimes the humor in the game doesn’t land—such as in the antics of Jill’s colleagues, or throwing around the jarring modern-day insult “fuckboy”—but it’s nothing too distracting. What defines VA-11 Hall-A more than anything is its negation of a primary hero—the game zeroes in on the folks that would normally fall between the cracks, never to be fleshed out or seen as anything apart from quirky embellishments of Glitch City.

VA-11 Hall-A’s city will be familiar to any fan of anime, then, but its flipping of character tropes may be less so (even if they are waifu-prone). For instance, there’s Dorothy, the delightfully cheerful “lilith” (or automaton) who happens to be a sex worker—and has even taken the precaution of installing hidden weaponry to protect herself in the event of being assaulted. Yet, Dorothy’s mostly unfazed by the danger in her work. In fact, she quite enjoys it. Dorothy’s positive attitude towards sex is also refreshing, her sunny demeanor a stark contrast to the “edgy,” distressingly-victimized sex workers seen in other works. She’s got more in common with the sex-crazed Panty from the charming Panty & Stocking with Garterbelt (2010), than with victimized-until-saved-by-brooding-men Alex in Gangsta (2015). In VA-11 Hall-A, sex work is a woman’s choice—not a controlling man’s.

On top of that, the women here aren’t one-note dames to be ogled at—they exist as a rare, mutually-supportive community. Like Alma, the busty, bespectacled hacker who happens to be Jill’s best friend of sorts, always ready to spill the details on new drama in her family. At times, Alma even acts as a confidant for Jill’s own venting when Jill finds herself overwhelmed by her own personal chaos. There’s also the adorably buff White Knight cyborg Sei, and her “Cat Boomer” childhood friend Selma. The two are a nearly inseparable pair, whose love for one another is palpable just in how they banter with one another. The women of VA-11 Hall-A are all on the lookout for one another, whether it’s helping to hide patrons from creepy stalkers or just lending a kind ear when needed. 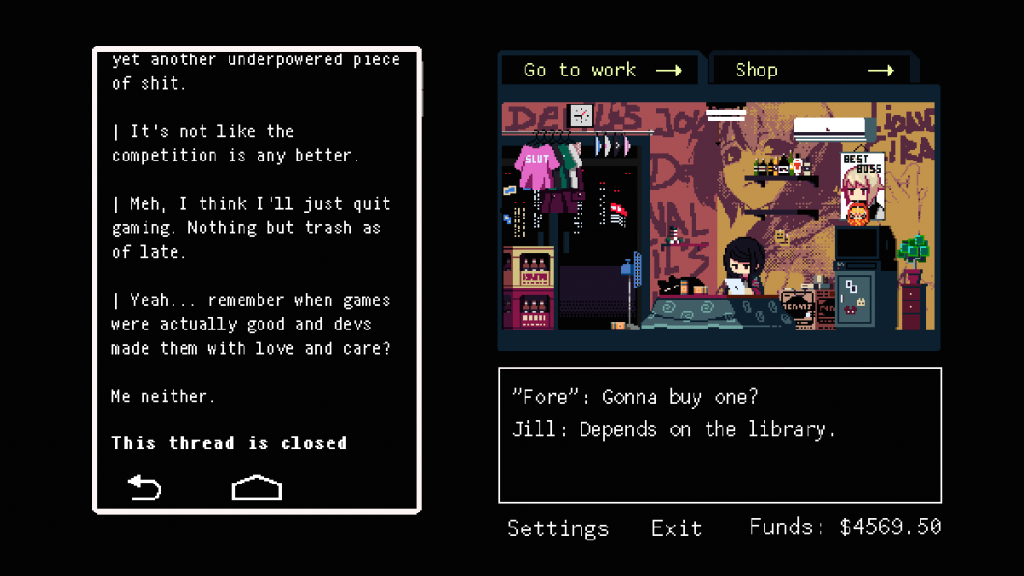 There’s also time to spend with Jill alone, outside of work hours, when you can get a larger grasp of the city you inhabit. This is when you can skim unhelpful food blogs from The Augmented Eye, a tabloid newspaper, on Jill’s handy-dandy tablet. You can also scroll through the city’s own Reddit-esque feed, to read musings about the existence of a so-called hacker running amuck in the city. There’s also *Kira* Miki’s personal blog, a virtual idol that seems to be Glitch City’s answer to today’s Vocaloid superstar Hatsune Miku. Except that, well, *Kira* exists in some capacity, since she’s an actual robot. (And a rather delightful customer at that, as a random encounter with her proves.) Glitch City’s story is told through the voices of Valhalla’s customers, and the flavorful sidetexts that Jill skims freely. It has the effect of making Glitch City feel lived in, despite the game never letting you take a walk around it.

But once that jukebox kicks in and I’m behind that counter, all the overwhelming cyberpunk dazzle fades away. I’m just an outsider, looking in through Jill’s non-judgmental (well, sometimes judgmental) eyes. I can only imagine what the mysterious city outside of Valhalla actually looks like. I can probably draw up a pretty decent picture. But I don’t have to. Glitch City lives through Valhalla’s patrons’ personal stories within it, and with Jill’s own personal relationship to what living in a such a rundown city entails. It’s the type of cyberpunk that is less concerned with the heights of its polluted buildings and the chaos of its flying traffic, instead turning up the volume on the people who are hustling for a living—a medium we can better relate to.

During my time at Valhalla with Jill, I grew used to seeing the familiar faces, day in, day out. Even with the most irregular of regulars. I knew that Dorothy always wanted something overtly saccharine like a Sugar Rush, matching her personality. I knew that the biker Mario, a Kaneda-reminiscent customer who popped in only a couple times, would change his mind from a feminine drink to a bitter, more masculine one, because of being shy about his sexuality. I knew that the asshole Editor-in-Chief of Glitch City’s The Augmented Eye would always demand a beer, and then insult Valhalla and spew sexist bullshit. As a bartender, I’d come to expect such things. Jill’s used to it. It’s her job to get used to it, afterall. But where there’s an incredibly unsavory customer, there were always about two or three more to brighten up her day, or at the very least, even out the negativity.

This isn’t Glitch City’s story. It’s the story of its people, its liliths, its sentient preserved-brains, its talking dogs. It’s the story of Jill and her customers, all being lost, and eventually finding their way. VA-11 Hall-A flips the atypical ways of cyberpunk, and shifts the genre into a new direction: by making it a character study, more relatable than ever before. It’s where other “modern cyberpunk” efforts, such as Watch_Dogs (2014), fail in their lackluster attempts to humanize their characters beyond its hyper-technological society. You don’t get to know people by scanning them with your phone, you do it by serving them a drink during hard times. At its core, VA-11 Hall-A is the rare cyberpunk story that has heart, and even goes so far as to give its female characters agency in their own lives. It’s a story where we, the player, take the backseat, and soak it all in. Just like a good book.