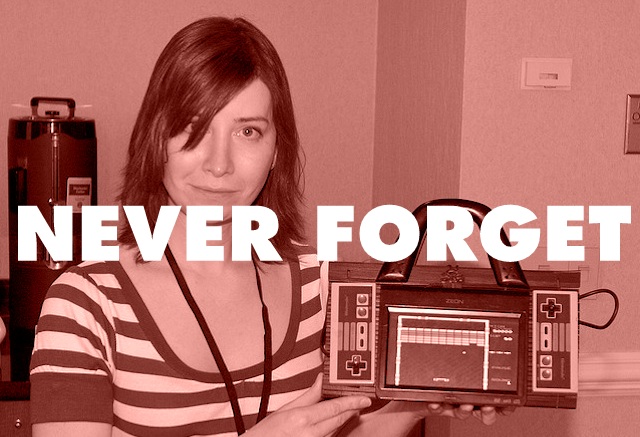 Valve certainly aren’t gun-shy about ousting their best-known talent. Though critics and fans admiration of Portal approached adulation, designer Kim Swift soon parted ways with the company. And you might have heard that after only a year Jeri Ellsworth — the quirky electric engineer who began her career building race cars — is out the door.

But why dwell on the negative? Jeri is an insanely talented woman and will no doubt soon find employment elsewhere. We thought we’d take the moment to marvel at the ingenuity of her creative spirit.

Because Half-Life 2 is always better when you’re beating down virtual walking mollusks with an actual crowbar. Please try to refrain from hitting the screen.

And in spite of the conventional wisdom that says keytars can’t get any more dorky, Jeri unholily coupled this bass keytar from a guitar neck and a Commodore 64 keyboard.

She also created an old-fashioned shooting gallery from cardboard. So yeah, there’s that.

I don’t mistake a fascination with resistors and capacitors for a lack of a sense of fashion, as this heroin chic dress that lights up when others approach clearly shows.

Okay, admittedly this purse that plays NES games and has two control pads Velcro’d to the side isn’t haute. But it sure is functional!

And, yep, this Giant of Castelnau-sized joystick inspired by the very 80s movie Joy Stick, which I’ve sadly not seen.

Best of luck, Jeri. And keep it up!