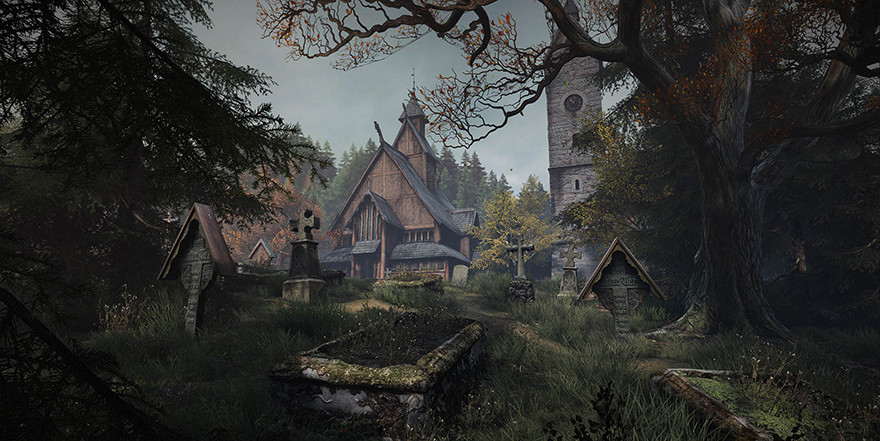 Title:
The Vanishing of Ethan Carter

The first thing The Vanishing of Ethan Carter tells you is that it’s “a narrative experience that does not hold your hand.”

But not 20 minutes into Carter, the game is doing just what it promised it wouldn’t do. I’m inspecting a pile of rocks that is both a mysterious clue and a photographically rendered testament to the visual power of the medium when handwritten words start clouding my vision:

The words separate and come together depending on where I look, and when I set my sights back the way I came they fuse into one platonic rock?, the apex of the single noun as question. The game prompts me to inspect it, and I do. And then it shows me exactly where the missing, blood-covered rock is: next to a peculiar tree stump that I passed by earlier.

I was more than happy to ignore the literal train tracks that lead your protagonist directly from his entrance into the picturesque Red Creek Valley to the rural mysteries that need solving, but if my hand isn’t being held, what is all of this? Every time I stumble upon—or am shown—a clue or murder scene that I must solve, handwritten text shows up. Over a pair of severed legs: legs? Over the corpse of a man with no legs: blood loss? At the front of a train, red with blood: blood? A rack of pickaxes with one empty space: pickaxe?

We are Paul Prospero, psychic detective and pointer-outer of the bleeding (oof) obvious. In the context of the game’s narrative—loosely, that we as Prospero have been summoned by also potentially-psychic-and-in-danger Ethan Carter—it might make sense that this detective thinks in clumsy annotations. But as a player moving through a triumphant visual medium, it’s vaguely insulting, especially in the wake of what is essentially an unnecessary disclaimer.

And even more so in the context of what is otherwise a beautifully crafted game. I’m not just talking about the scenery, hemmed together not from digital textures but from actual photographs of old churches and piles of rocks, individually digitized and put together to make a believable pastoral valley. The underlying narrative is both gentle and mysterious, and ultimately gut-wrenching in its final moments. And before players can get there, they have to go through not just a series of murder investigations—which pile up on top of each other to eventually form a cohesive whole—but scenes inspired by the fiction Ethan himself wrote. His stories, full of imagination, are a reflection of his family and the darkness of his existence in that lonely valley, and each one offers up incredibly memorable moments. It is these scenes alone that make the game worth playing, because it is here that the visual flair of the game shines brightest: the ground littered with skulls; the apparition of an astronaut; a cavern filling suddenly with the ocean.

as a player, I was always looking for more.

Even though the game’s creators regularly refer to heavy hitters like Carver and Lovecraft, the real love connection is to James Thurber’s The Secret Life of Walter Mitty, because amid the psychic murder investigations and the lovingly crafted digital rendition of a dam, there’s powerful magical realism that fits in seamlessly, even as it comes out of nowhere. Ethan Carter’s greatest strength might be that no narrative aspect feels out of place, even though they might be informed by the prose of a young child. The greatest weakness, on the other hand, isn’t just that there aren’t more of them, and it’s not that they’re hard to find; it’s that the game’s environment is built in such a way that, as a player, I was always looking for more.

One of the first computer games I ever played was Wolfenstein 3D, a game which featured hidden secrets built into walls, only accessed by pressing the spacebar right in front of them. This led to my computer-owning friend and I mashing B.J. Blazkowicz into every wall we found, holding down the spacebar as we smeared face-first across the side of a room. A similar effect took place in the early forest of The Vanishing of Ethan Carter: the first puzzle I found involved searching for hidden traps, and so, for the next half hour, I began digging into every spurious alcove in the forest, of which there were suspiciously many, and of which none had much to offer except rocks, trees, views.

There’s an uneasy sense of contrast here: a refusal to let the player think for herself when it comes to clues (rock?), yet areas and pacing choices that let the player explore and flounder. The spacious, beautiful environments ultimately lack any purpose beside showing us spacious, beautiful environments. They do a wonderful sense of creating a place, but it can also feel like they’re just postponing a meeting between the player and the invisible walls that outline the perimeter, hold it all together, and wait for the player to run into the next bit of story. One or the other might be fine; together, it’s as though the game confuses its priorities: highlighting the environment and engine when it should be boasting about its fantastic, magical moments. This is perhaps made most clear by the fact that the game is content to let the player miss those very moments as they move through the game. While this might be evidence of the game’s refusal to coddle, all it means is scrambling back across the gaping environment at the end of the game if you missed something, the ending closed off to you as though it were a locked door.

In the end, Ethan Carter’s ratios are just a bit off: maybe a little less hand-holding at certain times, a little more at others. But to pretend that it’s not there at all is just a refusal to acknowledge the way in which details and design choices can limit or direct play. Ethan Carter operates under a specific set of rules, just as Gone Home and Dear Esther did before it. Even if there’s no direct hand-holding, so to speak, it exists in the same way the game exists, as the player learns it through experience with these specific systems. Carter is most frustrating when it attempts to deviate from those systems as though this were, in some way, a refusal to become friends with the player, when really, it should be as welcoming as possible.