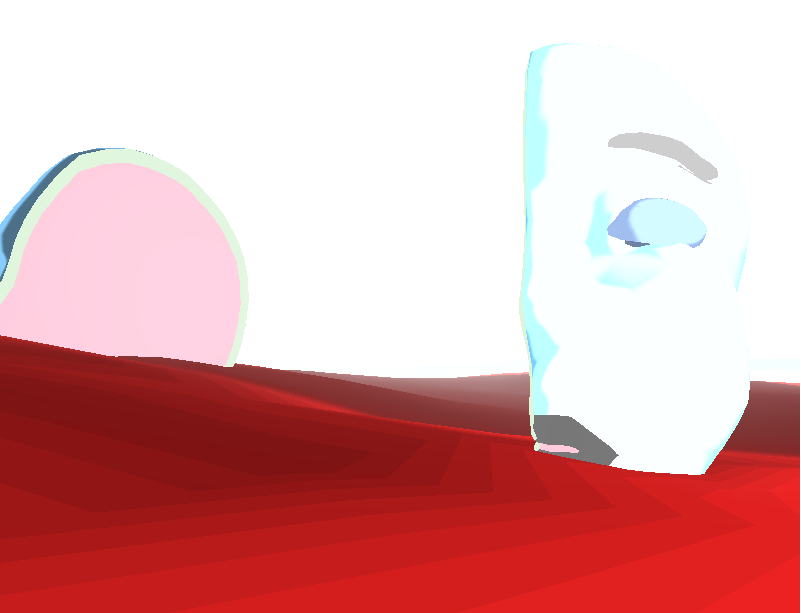 Your introduction to the world of Vapor, “an exploration of a surreal interpretation of Samsara,” is falling—of course. You’re a tiny little speck, sliding down a warm pink tunnel that dumps you into a white void, solid ground rushing to meet you.

Samsara is the Sanskrit word for reincarnation. The specifics of samsara, like who you are reborn into, and how, depend on the context of the various religions that believe in its principle cycle, including Hinduism, Buddhism, Jainism, or Taoism. What does remain a constant throughout are the three major stages of reincarnation: birth, life, and death.

The first object you meet in Vapor, at first half-formed in the fog, turns out to be a statue of an imposing woman. She’s looking up, hand outstretched as if asking for help or pulling away from something. You know it was she who began this particular life cycle, because the beautiful sacrifice of your birth is still visible through the gaping hole of her stomach.

You walk through it, coming upon a few scattered objects in an enormous, cumbersome space. It’s easy to get lost in the world of Vapor. Suddenly finding yourself anchorless and too far into the wide open space, you can easily lose track and need to restart. But getting lost in the vastness (though potentially annoying) seems befitting to the theme, the vast space mimicking the stage of life, where getting lost is only to be expected.

getting lost is only to be expected

There are a few other broken things about Vapor that seem less excused by the subject matter (crashes, glitching, inability to load major parts of the game). But, as only a beta, I expect later versions will iron out the hairier details.

Otherwise, Vapor gently guides you through the three stages of reincarnation, well-positioned 3D audio effects leading you to the next tableau or portal to a different stage in the cycle. The tableaus, all statues of women with reaching hands, recalls some central tenants of samsara. Their faces forever frozen in looks of remorse, the glass statues embody suffering, redemption, and sacrifice; all that is needed to reach higher levels of consciousness as a reincarnated being.

Each of the frozen figures calls to you in its own way, and whichever you choose brings you through a different final stage. Death is almost always a mixture of wonder and paralyzing fear. Each event, through provocative, remaining vague enough to mean whatever you need it to—before the screen goes black, and you’re rushing down a pink tunnel, the ground rising to meet you.

You can keep an eye on developments with Vapor on the games itch.io page (download on browser, PC, Mac, and Linux for free) and creator Jeron Braxton’s twitter.