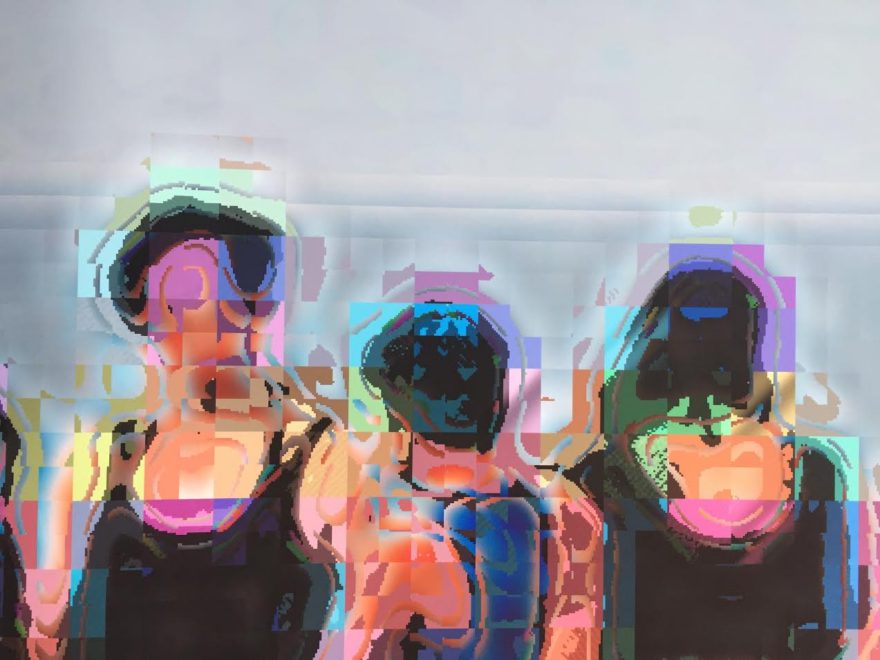 This year’s Bit Bash festival in Chicago, which took place on August 13, saw the independent videogame showcase expressing its clearest curatorial vision to date, evolving its DIY ethos into a more polished version of the plucky little party that debuted two years ago. The venue change this year may have stripped some of the makeshift charm from of the festival, but alternatively it granted Bit Bash the opportunity to cater the space to their own needs instead of stepping around someone else’s stuff. With that evolution also came a recalibration of Bit Bash’s image, landing somewhere on the gallery opening side of a warehouse party. Not that Bit Bash has turned into a stuffy museum affair (it hasn’t), but the front room, which set the tone for the rest of the show, was decidedly more art exhibition than video arcade.

Bit Bash 2016 was held at Revel: Fulton Market this year instead of t-shirt company, Threadless’, store/warehouse of years prior. The building’s enameled concrete floors and white-painted brick walls provided a far blanker slate than Threadless’ busy wall murals and functioning storage facility. The venue wasn’t exactly a “white cube” gallery space, but it came close. The layout allowed for clear divisions between different types of games, including a quiet games nook, a curtained-off 18+ corner, and the aforementioned arthouse space in the entry hall, among others. The juxtapositions of games felt purposeful beyond mere convenience, particularly regarding the thematically intertwined pieces in the front room.


The pervasive themes of Bit Bash’s entry hall were vaporwave and glitch, as indicated in the festival’s Windows 95-styled promotional trailer. Each projected rectangle lining the walls of the front room brimmed with fluorescent blues, yellows, and pinks. Seaquest 1992 and VHS vs Betamax directly incorporate early polygonal graphics, and seem charmed by the quirks of now-obsolete technology from the late 80s and early 90s.

Bands of pastel rainbows swam in and out of existence

Glitch Tank, Beglitched, and Sadventures in Glitch all proclaim their adoration for the graphical hiccups in their titles, but just about every piece in the front room employed glitch aesthetics in some form. The spartan confines of the entry hall offered ample contrast between the broken and/or messy aesthetics of the games and the practical, clean nature of the space in which they were housed, further highlighting the thematic through line.

Not all of the works in the front gallery were games though; in fact, some weren’t interactive at all. Cascading code fidgeted in a Chrome tab as Nick Briz and Jon Satrom’s Kludgy Krawler scraped through the internet. Benji Blessing Sayed’s after_the_party was glitched-out psychedelia to the point of total abstraction. Bands of pastel rainbows swam in and out of existence while speakers blared pitched-down vocal noise that sounded like it was causing the speakers physical pain.

Paul Hertz’s print Foster Beach, Chicago is a photography-derived image where a line of beachgoers congregate along the shoreline, each individual a patchwork of pixelated blobs that coalesces into a human figure. The wall label said it was a video, but whatever the mix-up may have been, the static, paperbound image was actually a welcome surprise—it was just about the only piece in the room that allowed for both distance and up close viewing.

Taken as a whole, Bit Bash using glitch aesthetics as an avenue into a more art-driven curatorial stance makes a lot of sense. So many games seek to immerse players in their virtual worlds, creating a suspension of disbelief that commands attention. But when a videogame glitches, it breaks and unplugs players from the matrix. Glitches call attention to the artifice of games and the fragile web that holds that architecture together. In short, intentional glitches are self-reflective, and offer a critique of the medium of games itself. Thus, glitch aesthetics prove a solid entry point for considering games and game-like things in an art context.

Find out more about Bit Bash Chicago on its website.