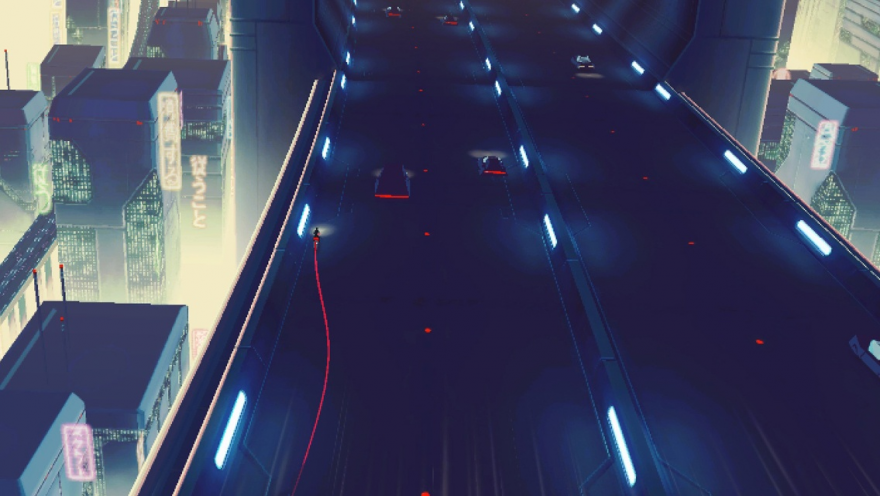 The rabbit hole of 80s anime runs deep. Just saying “80s anime” conjures a particular vision, a storm of exquisitely detailed gore and outre sex. There’s Akira, sure, which has been the standard-bearer for the medium since it hit Stateside in 1989. But push just a little further and you find the batshit oeuvre of Yoshiaki Kawajiri, he of the infamous Ninja Scroll and Wicked City, or child-slaughtering madman Go Nagai’s Devilman and Violence Jack, or….well, you get the point.

But a common thread through many 80s anime joints that doesn’t involve anatomically-precise violence is their fascination with The Future. Specifically, that well-trod year “199X”—home to many a nuclear apocalypse and dystopian police state.

Cagil Bektas’s iOS game Vektor takes a healthy portion of the 199X cake for itself, putting the player in the shoes of a courier delivering information crucial to toppling an evil government. By Bektas’s own admission, the game is a fusion of “Road Rash, which I played a lot on my Amiga through my childhood … and 80s cyberpunk/sci-fi anime like Akira, The Running Man, and Cyber City Oedo 808.”

“More violent than the violence itself is the architecture.”

That last reference, to one of Yoshiaki Kawakjiri’s comparatively restrained efforts, led to Bektas expounding on the influence of those ultraviolent neon anime. “I think violence in anime is a symbolic expression of that consciousness,” he said, “which is more than needed to survive in the current system—and maybe the thing that makes it hard to survive mentally. More violent than the violence itself in those anime is the architecture, mega-structures which are nowhere near being humane. The cities are the biggest enemy of an individual, reflection of oppression and authority.”

Vektor is an endless ride along some brutalist mega-highway, perfectly encapsulating Bektas’s influences in spirit and in aesthetic. And its chunky retro-future UI hints at a metanarrative where the pseudo-corporation (Bektas referenced zaibatsu, the business conglomerates who had a chokehold on imperial Japan) Vektor distributes game machines pre-loaded with “The Courier.” That’s the very game you’re playing, man! So far this framework does not impose itself; indeed, Bektas seems more concerned with layering meaning into the design of his game than forcing the player to wade through the swamps of “world-building.”

“I’m heavily inspired from the UIs from the original Alien and Blade Runner movies,” Bektas said, “where in reality those UIs are totally unusable and just for show. But those designs gave me the impression of the machines having their own consciousness; they are not big on user-friendliness, nor is that their purpose.” The irony of Bektas developing an iOS app about the callous indifference of machines is presumably not lost on him.

“They are not big on user-friendliness, nor is that their purpose.”

“I think we are not far from those oppressed societies in our current living form. We have the consciousness, but not the power to challenge the authority. Freedom is a commercial product that we all believe we can buy.”

Ultimately, Bektas implored me to listen to the soundtrack, which he said “represents more than I can express about the above subjects.” He’s too quick to discount his cogent observations, but it’s consistent with his heartening belief in show-don’t-tell. The warbling Vangelis synth lead and tentative beat of “Zaibatsu” grope for coherence, for purpose. They’re mechanical, but strain to sound organic. They are the glowing city, bursting at its borders.