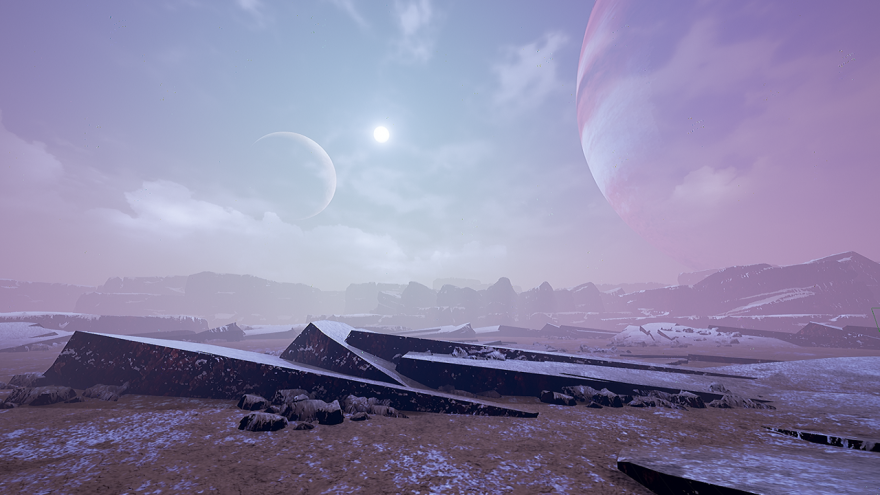 Venineth’s internet presence is currently composed of three narrative-less videos, a handful of screenshots, and a loose description of an exploration-based puzzle game. Besides that, what you’ll be doing in its world is unknown. Their website mentions “ancient alien technology,” but the worlds that have been shown so far are barren but for a few beams of blue light. There are no characters, at least that have been shown so far, and no words, just a pinball-esque reference point for the player—you literally play as a ball—that rolls gently around the desert. It pushes one of the blue lights to touch the other, then makes its quiet way up the bridge and forward. The electric humming fades into the distance.

The videos that Venineth has had so far feel like something you would find in a satellite, some trace of an ancient and incomprehensible people that has languished for eons in the distance between stars. There is the implication of something vast, and little else. We are left to speculate about the origin of the beams, the ball, and the glowing portal that it rolls out of and into the wastes.


It is possible to conclude that the puzzles will probably have to do with the aforementioned beams of light, and that the blue place that the ball comes from, oppressively circular and bright, will have something to do with it too. Presumably their common color connects them to the alien technology that it will be your task to discover. Besides that, though, Venineth isn’t giving any hints. Aside from a few geometric pillars that could be a natural formation just as easily as they could be man-made, the fields and valleys shown in the screenshots are empty.

As you might expect of any extraterrestrial message found in a strange land, Venineth could take a while to decipher. Its creators don’t seem to be in a rush, and there is nothing to stop them from letting clues trickle out leisurely, posting more wordless videos that lead up to some unknown whole. Once this world is created, what we’ll find in it is anyone’s guess.