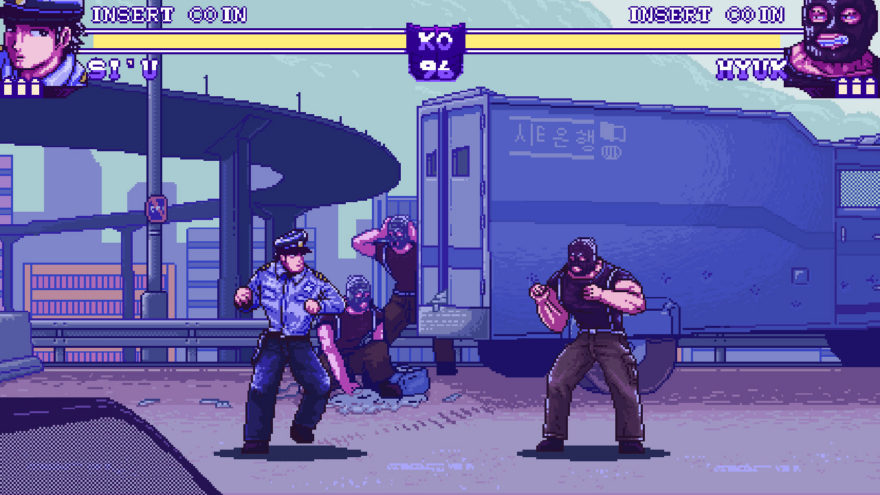 As far as violent crime rates go, South Korea is relatively tame when compared to most of its contemporaries. As detailed in a crime and safety report conducted by the U.S. Department of State Overseas Security Advisory Council (OSAC) last year, with the majority of crimes amounting to persistent low-level street crime such as pickpocketing and disorderly conduct. Reports and subsequent prosecution of sexual assault have risen, though this is in part owed to the Korean National Police’s concentrated campaign to root out and raise awareness of this problem since 2013. The country’s overall crime statistics have remained relatively static since 2010, so why the hell would someone set a game like Verdict Guilty, a ‘Cops and Robbers’ themed 2D fighter, in South Korea?

“It’s an idea I’ve had since I was 12 years old, although it was originally set in New York,” says Paul Davis of Retro Army Limited. “I chose South Korea as there’s no games set there, even though it has a very interesting history and a unique culture. Japan and South Korea have very low crime rates, [which is] partially due to their culture being based around serving the society, whereas in the West our cultures are based around the individual. I thought weaving some of the ‘service to society’ messages into Verdict Guilty would be of interest to Western customers, as in an exchange of ideas.”


Citing his intentions to create a game that serves as a necessary counter-move to what Davis describes as a growing anti-police sentiment in the West, the game attempts to inject a measure of nuance through portrayal of its characters—most noticeable in the duplicitous machinations of the seemingly-lawful politician Sabu and the repentant tender-hearted uncertainty of Yakuza enforcer Jae. Whether intentional or not, Verdict Guilty also shines an unsavory if momentary light on South Korea’s much-maligned reputation for overt racism and prejudicial treatment of foreigners in the case of Secret Agent Reese, who, while trying to ask a traffic cop named Minso for directions to a park, is outright profiled as a drug dealer. Aside from these exceptions, the game’s moral dichotomy between the apparent purveyors of social mores and the convicts and terrorists who seek to tear apart society remains firmly defined.

handcuff their opponent while ruthlessly beating them into submission

Verdict Guilty attempts to portray a police force that, though imperfect and at times incompetent, remains nonetheless resolute in its intention to uphold the law and strike at corruption wherever it may lie. Though, this message is uncomfortably muddled when one recognizes that the defining defensive move of the law enforcers in this game is to handcuff their opponent while ruthlessly beating them into submission. It’s no secret that the United States is currently caught in grips of a moral crisis when it comes to policing, and this comes to mind when considering Verdict Guilty.

Outrage among minorities directed at what is seen as the near-total lack of accountability and consequence for misconduct in the case of police-related homicides sits at the forefront of the US cultural consciousness right now. Ensuring this discourse is highly visible right now is the social advocacy movement Black Lives Matter—which is seemingly “pitted” against the institution of policing in America—and the sympathetic sentiment that law enforcers must be allowed to perform their duties and preserve their own lives by any means necessary. A videogame has scant chance of mending the generational rifts of resentment for the police caused by decades of prejudicial policies and institutional indifference, but it can bring to light the salient fallibility inherent of any one person when positioned in a role of public service defined through the execution of authority.

You can find out more about Verdict Guilty over on its website and purchase it over on Steam.