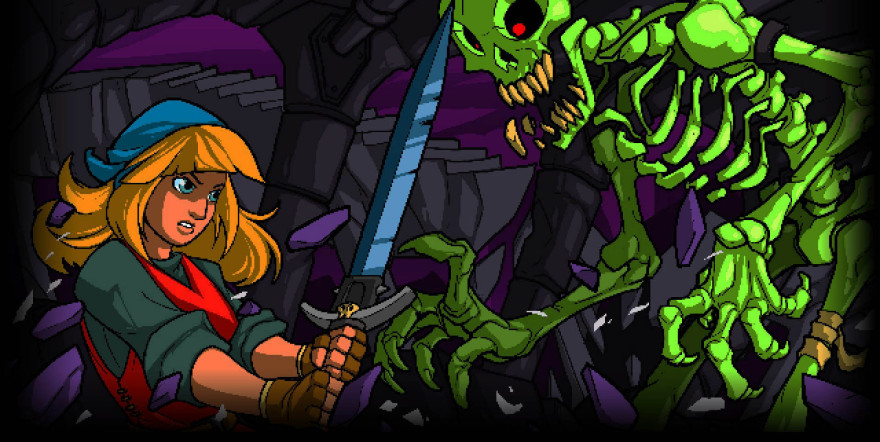 Title:
Crypt of the NecroDancer

Crypt of the NecroDancer is a game with a great deal of verve. Many of the elements are familiar—swords and dungeons, slimes and skeletons—but Ryan Clark’s dungeon-crawler distinguishes itself from simple nostalgia by tying its activity directly to the driving 4/4 beat of its soundtrack.

The hero, Cadence, has lost her beating heart to a diabolical sorcerer, and now can move only in time with the music that saturates her environment. Driven (and constrained) by the same throbbing beat, rhythmic beasts will try to prevent Cadence from penetrating any deeper into the VIP areas of their fiendish eternal rave, and, as is only appropriate, they do so with style.

Even when they’re standing in place, skeletons shimmy to the beat, and before they leap toward Cadence they throw their hands in the air like they just don’t care. When you find the shopkeeper, he adds his voice to the music in a soaring digitized aria.

This system of rhythm-driven action creates combat that is simultaneously real-time and turn-based. Using only the four arrow keys to move and dig, attack and retreat, Cadence has to evade and defeat enemies who approach and attack on the beat, or every other beat, or every fourth beat. Survival depends on learning and mastering these patterns, as well as collecting coins and diamonds to buy temporary power ups in each level or permanent ones in the lobby to which Cadence returns each time she is killed.

When Cadence stays on rhythm, the entire world lights up like a disco dance floor. When she loses the beat, everything goes brown again. Everything happens in time, but the beat goes on, with Cadence or without her. This is play as dance, and losing a step is like losing a turn, enemies working both with Cadence and against her, instructors stepping on her toes when her feet are in the wrong place, sending her back to the lobby to take it once more from the top.

By breaking the dungeon crawler down to four keys for four directions in 4/4 time, Crypt of the NecroDancer points to the reality that all action games are in some sense rhythm games, asking us to learn and master their own particular timing. Jump now. Attack now and now but not now. Heal before the boss attacks again. Stay in cover until the other player is reloading now.

all action games are in some sense rhythm games

Like many roguelikes, Crypt of the NecroDancer unapologetically demands virtuosity from its players. Players who succeed will find an incredible wealth of ways to tune and re-tune their experience. Unlockable characters shift play demands by dying when picking up coins, or being able to confuse but not attack enemies, or being able to move independent of the beat.

The lobby offers opportunities to practice against individual enemies and learn their patterns one-by-one outside of the levels. As a design element, this is an act of generosity, but in practice it can feel like practicing scales—the acquisition of virtue through tedium.

Crypt of the NecroDancer rewards mastery with deep and varied opportunities for improvisation. But Cadence will die in the first levels again and again before players build the skills necessary to progress. Those who endure will be rewarded, but—and this is a tough set of contradictory impulses for me to sort out as a critic—I wish that a game built on such a sense of fun didn’t sometimes feel like it required so much of a slog to get there. 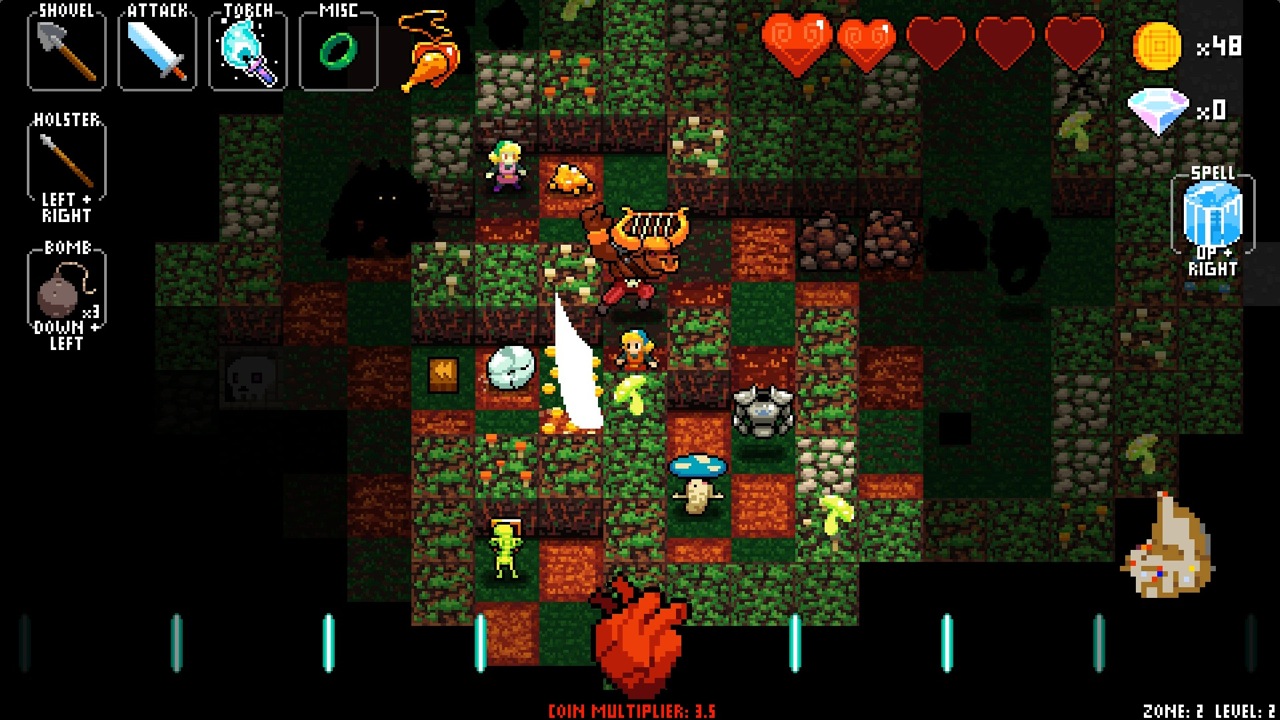 This is one of the great challenges of videogames—sharing as well as demanding virtuosity. I don’t want Crypt of the NecroDancer to be easier. Saying such a thing would be no more meaningful than saying I want playing an instrument to be easier. It isn’t necessary to be able to play music at a professional level in order to enjoy it, and it’s entirely possible to have a great deal of fun in Crypt of the NecroDancer even without being able to unlock every character and bonus.

I don’t have to be able to play jazz in order to enjoy it, but there are few venues to experience a game like Crypt of the NecroDancer other than playing it, and like jazz there’s a sense in which so much of what the game does is deeply tied to performance. Speedrun videos might be acceptable for Super Meat Boy or Ninja Gaiden. These games are symphonies, with textures and interpretations that will be slightly different in the hands of every player, but in which the score is already set, a composition already complete.

Don’t let its electro beat fool you. Crypt of the NecroDancer belongs in a jazz club, a live, imperfect performance, sometimes fumbling and sometimes transcendent, where preparation can become improvisation with an audience shouting “go, that’s right, go!”