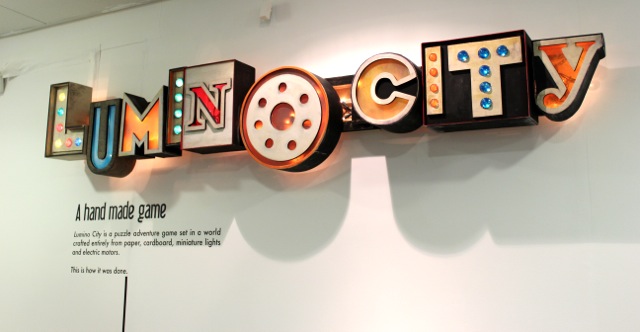 We’ve been tracking the game for awhile. First we discussed the British origins of the beautifully handcrafted game, where “warmth” and “serendipity” encompassed the design process and a release date was still a fuzzy, far-off idea. Then we went on a whimsical tour through the real-life papercraft set of the game. Now we can report that it will be available for Mac & PC via Steam on December 3rd, 2014.

The announcement was paired with a “Making of” exhibition across the pond. Curated by State of Play in collaboration with Gamecity, the exhibition featured the actual, working, 10-foot tall set of Lumino City and offered workshops, tours and talks on the unique style and creation of the game itself.

Here’s what Luke Whittaker, co-founder and director of State of Play Games had to say:

“After such a long time working on the game, to reveal it for the first time at EGX in London, and at GameCity in Nottingham, and receive such a positive response – whole families sitting down to play it together – it’s been wonderful. At last, we’re really excited to finally be able to get the game out there for everyone to play.”