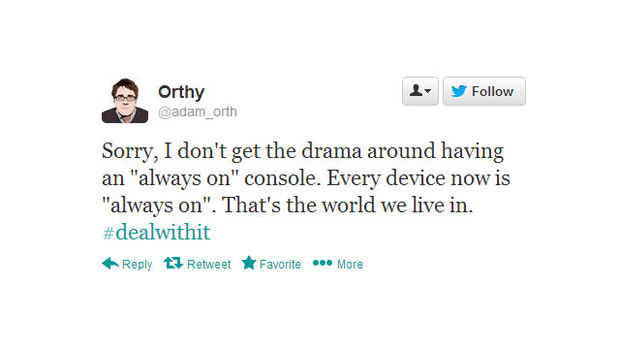 The internet is a great place to be if you demand an endless stream of pictures of cute cats and ugly babies. But it’s not so great if you are announcing features for a new game console that fans are not especially stoked about, (or are a professional bodybuilder trying to pass on your knowledge to young people on YouTube, or happen to look like a guy who did something horrible.)

This Adam Orth found out the hard way. He and his family were threatened. He had to leave town. He had to safeguard his online banking accounts. He lost the best job offer of his life. He was made a meme. “I’m only an idiot when I’m online. And I’m always online,” was captioned around a drawing of his head. While he still goes by Adam Orth, he had to assume a new internet identity.

His offense? He was part of Microsoft’s unpopular Xbox One campaign, which, among other things the internet got up in arms about, said the new system would be required to always be connected to the internet. Ironic? Yes.

Then, he trolled the internet, tweeting the above tweet. A bad choice.

In a talk given at GDC Next in L.A., Orth addressed ways to curb internet vitriol and vigilantism, focusing on online games. He gave examples of games that were getting it right, citing League of Legends, Counter-Strike, and Journey, curiously.

His point is that how software is designed actively encourages the way we use it, for good or bad. Journey is a role model because it “actively discourages …toxicity … and griefing with the core gameplay experience,” allowing players to “focus on the game mechanics of together,” he said. Hopefully the next wave of games will take some of these lessons to heart. In the meantime, remember, don’t hate.