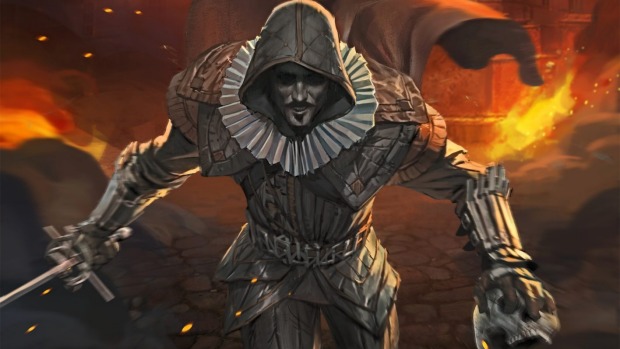 To be, or not to be—that is a rhetorical question, and it gets at the challenges facing anyone who wishes to convert Shakespeare’s Hamlet into a videogame. Games are about the ways user choices can shape a narrative and Hamlet—well, let’s just say he prefers to keep his own counsel.

Every level must be conquered until Hamlet’s father’s death has been avenged!

Nevertheless, Simon Peacock, the Voice and Motion Capture Director of Deus Ex: Mankind Divided, recently took on the challenge of converting Hamlet into a videogame, and then converting that game back into a play. This is more than a theatrical game of broken telephone: Hamlet: The Video Game (The Stage Show) mixes mediums in order to highlight their unique narrative properties. The audience at the show’s performance fulfills the role of a game’s focus group, both commenting on and shaping the game that is taking place on stage. As the webpage for the show’s debut performance in New Zealand puts it: “every level must be conquered until his (Hamlet’s) father’s death has been avenged!”

In an excellent radio interview about his game-cum-show (let’s just agree to call it a production?), Peacock conceded that Hamlet is “the worst show Shakespeare wrote to turn into a videogame because it’s four hours of dialogue and five minutes of action.” Yet this incompatibility is what makes Hamlet: The Video Game (The Stage Show) compelling. At the point where you’re finally adding a final boss battle to Shakespeare, you might as well go all the way. Moreover, taking on one of Shakespeare’s most popular plays allows Peacock to highlight the ways in which videogames have been evolving as a narrative form. “I wanted to make something that was accessible to theatregoers as well as videogamers,” Peacock explained in his radio interview, “so we had to find some common ground.”

Of course, convergence with traditional theatre is unlikely, but it is also unnecessary. Radically different adaptations offer audiences an opportunity to see famous works in entirely new lights. Hamlet: The Video Game (The Stage Show) is simply taking the long-accepted premise that a story can be adapted in a great many ways to its quasi-logical conclusion. Once we accept that Shakespeare does not have to be treated with kid’s gloves, we might as well let creatives from other disciplines, including videogame design, get in on the fun.