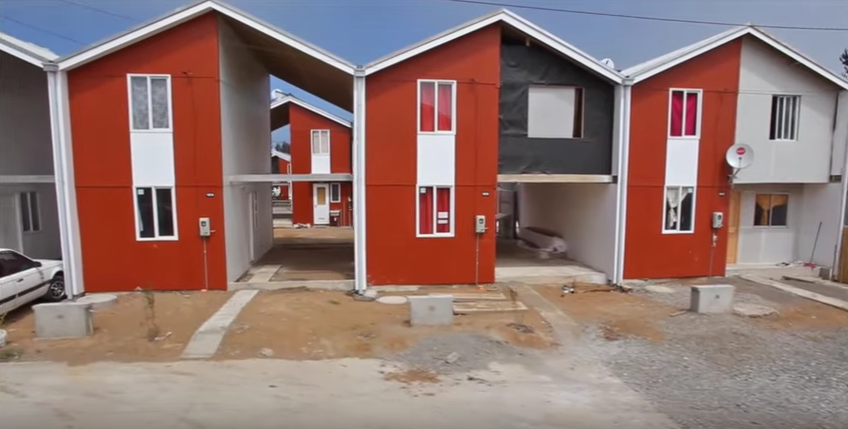 As an architect, Alejandro Aravena traffics in a sort of obviousness that only becomes apparent in hindsight. The Chilean’s best works gradually reveal themselves to be fundamentally explainable. This, one might argue, is a more compelling magic trick than the eternal mystery of how some of his colleagues’ wild creations remain standing; Aravena is Penn and Teller to the starchitect’s Houdini.


Villa Verde in Constitución, Chile, is instructive in this regard. Completed by Aravena’s firm, Elemental, in 2013, the 484-unit housing development is composed of repeating peaked-roof forms. Beneath one side of each slope sits the interior of the home, walled in from the elements. The other side is a void, a covered outdoor space for families to use however they wish. Built on a tight budget, each unit is at once an archetypal house and something altogether more flexible. “As with all such ideas,” the Financial Times’ Edwin Heathcote writes, “once you see it, it is difficult to understand why it has not become ubiquitous.”

This same combination of the surprising and the eminently logical can be found in Tuesday’s announcement that Aravena is the 2016 winner of architecture’s highest honor, the Pritzker Architecture Prize. At first glance, he is not the most obvious of candidates, both younger (48) and with a less glitzy or international portfolio than the traditional laureate. With the benefit of hindsight, however, it’s easy to see how this all happened. Having served on the Pritzker jury for six years, taught in America, and delivered a well-received TED Talk, Aravena’s hardly an unknown. Moreover, Shigeru Ban’s Pritzker victory in 2014 suggested that the award’s jury was increasingly interested in architecture that addressed humanitarian and social concerns instead of that which catered to elites. As always, Aravena makes perfect sense once you see how the pieces line up.


Awards tend to say more about those who confer them the works they are meant to recognize. Mozart in the Jungle is not without merit as a television show, but it’s victory at the Golden Globes is in large part a reflection of the Hollywood Foreign Press Association’s soft spot for new shows, particularly those with foreign cast members. Likewise, it takes nothing away from Aravena to note that the most interesting aspect of his Pritzker win is the jury’s implicit statement of principles. As the Los Angeles Times’ Christopher Hawthorne notes:

“The Pritzker has faced rising criticism in recent years for symbolizing a rather old-fashioned definition of architectural practice, to put it mildly. With a few (but only a few) exceptions, it’s honored men at the expense of women; individuals at the expense of pairs or collectives; architects who work for wealthy, establishment clients at the expense of those working for the poor or disenfranchised; and north over south. It’s basically been the Great Man Theory of architecture as represented by a fancy bronze medallion and a check for $100,000. Choosing Aravena is a departure in terms of the last two categories, but of course not the first two. A modest move in a different direction, let’s say. The Pritzker press release says he ‘epitomizes the revival of a more socially engaged architect.'”

So this year’s award represents progress of a limited (and arguably self-serving) kind. It’s not much, but it’s something, a small step towards expanding society’s image of what constitutes interesting or noteworthy architecture. In the real world, architecture moves slowly. In virtual worlds, however, architecture moves even more slowly.


There are two main architectural typologies in games: the tower game and the city builder. The former is in larger part a vertical reconfiguration of the latter, but that is a statement of architectural principles. Tower games, like Blockhood and Brick Blocks, encourage the player to treat the elements of urban life as fundamentally flexible components that can be rearranged at will. City builders such as Polynomics, on the other hand, are more interested in systems, and whether a territory as opposed to a single building needs can satisfy a population’s needs. These are questions that need to be answered, but they are not the only questions, at least not in the way games can make it appear.

In a recent interview with Dezeen, the German humanitarian aid and refugee expert Kilian Kleinschmidt argued that “the cities of tomorrow” are refugee camps. “The average stay today in a camp is 17 years. That’s a generation,” he noted with reference to European refugee camps. The duration of stays in camps or makeshift housing on other continents can be much longer and all the more challenging. This calls into question the very designation of ‘temporary housing’. Can it even be meaningful if families live in such houses for much of their lives? Is the only difference between a city and a camp the level of care devoted to each? If so, that’s a problem.


The challenges of displacement, particularly over long periods of time, have occasioned all sorts of interesting architectural interventions. Abeer Seikaly won the Lexus Design Award in 2013 for “Weaving a Home,” a flexible tent concept that can adapt to different environments. The project’s renderings could just as easily be used in a future edition of Star Wars. Shigeru Ban, the 2014 Pritzker laureate, designed shelters for displaced peoples in Rwanda, Sri Lanka, China’s Sichuan province, and Japan. Likewise, Arevana’s practice worked on the master plan for Constitucion, Chile, after it was flattened by a tsunami in 2010. The ensuing project is a testament to cost-effective planning and public consultation. Indeed, Aravena credits those consultations with pointing to the importance of large flood barriers.

Where are these ideas in virtual architecture? Games about humanitarian crises, like Syrian Journey and Cloud Chasers—A Journey of Hope, focus on the fleeing part of the refugee experience. This may make for good gameplay in the narrowest possible sense of the term—running, or any gerund for that matter, is the sort of action that can be recreated or controlled—but it’s only a small part of the story. What about those who cannot run far afield? What about the far larger populations who live in refugee camps or are displaced by conflict or calamity? Games are good at imagining wild architectural ideas and challenging players to come up with solutions to big problems in some scenarios, but where real architectural imagination is most needed, they continue to lag behind the Pritzker jury.