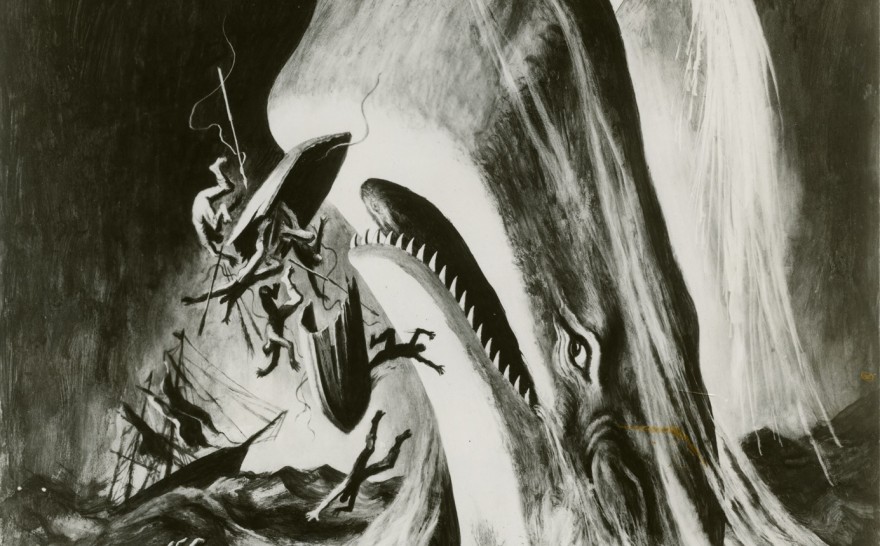 After Captain Ahab’s whaling ship, the Pequod, has been destroyed by the white whale he’s been hunting across the globe in the final scenes of Herman Melville’s classic novel Moby Dick, he says the following: “Towards thee I roll, thou all-destroying but unconquering whale; to the last I grapple with thee; from hell’s heart I stab at thee; for hate’s sake I spit my last breath at thee.”

It’s clear that Ahab has come to hate the whale with an unmeasured scorn. It took one of his legs prior to this final conflict and has since obsessed over killing it. Now accepting his defeat he hopes that, even beyond death, he will pursue and hunt the creature down. For Ahab, the whale is an ultimate adversary and is the curse of his life and whatever traces of life he may experience beyond the final curtain.

my white whale seemed to be doing a tribute to Scarface

But since the novel’s popularization at some point in the 20th century (it took upwards of 50 years for it to be appreciated as widely as it is now), this famous duel of man and monster has been understood as a metaphor, for it is not the whale that is Ahab’s undoing, but his infatuation with killing it. Now we remark that someone’s “white whale” is the object of their fixation.

However, there is nothing metaphorical about the white whale that you embody in Nick Barr’s videogame adaptation of Melville’s story. In Pequod, you have to make sure of that by raising this lurching, blubbery body from the ocean’s surface and bringing it crashing down on to the decks of the ships that hunt you. The idea is to gain power by destroying boats in order to work your way up to Ahab and the Pequod, rising to the might of the white whale in the final scenes of the novel.

But, while metaphor is absent here, fantastical embellishment certainly isn’t. As you progress through the chapters of the game, destroying the ‘boss’ ship to finish each level, you can gain powers to aid in your whale’s body-flopping fight tactics. It may be an enormous narwhal-like horn, or a huge buzzsaw that spawns when you destroy a ship, or a bomb that orbits the whale and explodes upon impact with a vessel.

All of these powers are procedurally generated so you never know what you’re going to get. At one point, my white whale seemed to be doing a tribute to Scarface with a laser cannon hovering by one of its flippers, and so, as I rose from the seabed to gain speed and air time for the biggest impact, I’d murmur “Say hello to my little…” and as the whale broke the ocean surface, an almighty boom of “FRIEND!” Hey, it seemed fitting at the time, don’t judge.

That’s not the limits of Pequod‘s creative add-ons. There are also ships that act as wooden submarines—appearing underwater rather than on top of it—as well flying ships that you need to batter with the tip of the whale’s stub-nosed maw during a particularly high jump out of the water. Those are the biggest variations, but the scarier ones are the shapes that the boss ships can take—there’s even one that appears to have teeth and a black hole for a mouth. In any case, none of them measure up to Ahab and the Pequod itself, and the only way you can reach them is to avoid dying at all, essentially becoming the invulnerable bad-ass whale that Moby Dick is reputed to be.

You can download Pequod at a pay-what-you-want price over on itch.io.