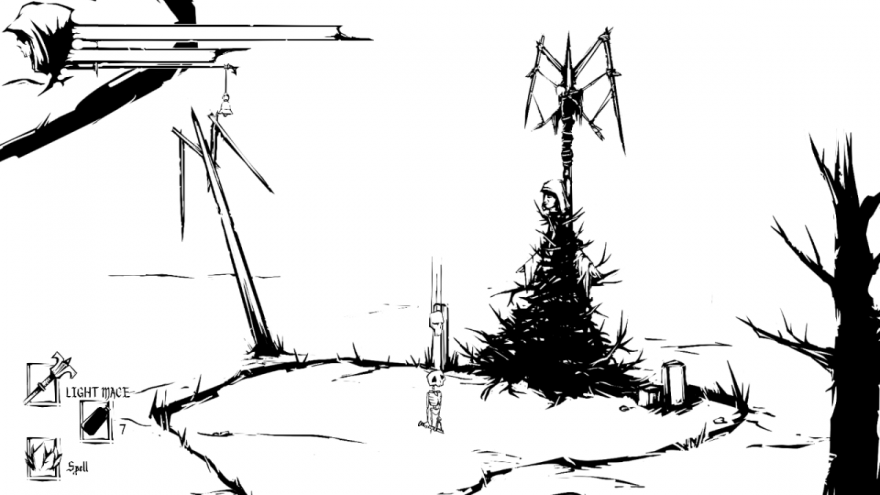 It was during his college’s printmaking course that artist J.D. Palmer happened across his love for 15th century woodcuts. First he tried out the intaglio technique, which involves carving an image into what is usually a wooden surface and then filling the indents with ink. Then came collograph, which is a scrappier technique that may use cardboard, hardwood, sandpaper, or any material with an interesting texture, and then sticking it with glue onto a wooden background before being inked up.

But the process that Palmer most adores and that informs the art style of the videogame he’s working on is linoleum relief painting (also known as linocut). Opposite to the intaglio technique, this one has you carving a mirror image of what you want into the linoleum surface before rolling it with ink and then printing. It sacrifices the grainy texture that you get with the other two techniques but allows for more precise and artistic effects.

Palmer looked to the 15th century masters of woodcut prints such as Albrecht Dürer and Hans Holbein when practicing the technique himself. Common in both of these artists (and many medieval printers, painters, and authors in western Europe) is the danse macabre, or the dance of death, which is famously a “medieval allegorical concept of the all-conquering and equalizing power of death,” as Encyclopedia Britannica puts it. It was a reaction to the awful pandemic that spread throughout Europe at the time and killed millions: the Black Death.

Dutch artist Pieter Bruegel the Elder’s oil painting “The Triumph of Death” is one of the concepts masterpieces: its sprawling canvas shows a mass skeleton army rounding up peasants, nobles, even royals into instruments of death, or otherwise hacking, beating, and maiming the bodies of the living. Holbein’s major contribution was his series of 42 woodcuts published in 1538 under the title “Dance of Death.” Rather than dancing with the deceased as the genre usually depicted, death (represented by aggressive skeletons) was interfering in the daily lives of the living, tormenting them as they slowly crept through the ages and towards their inevitable expiration.

As to Palmer, his very first print of a tarot card shared the ominous qualities of those classic medieval art pieces. For his class assignment he, of course, chose to re-imagine the XIII tarot card which, if you don’t know, usually represents Death (you can see his print below). Rather than a skeleton, he uses an emaciated figure wearing a plague doctor mask and with multiple arms holding a pocket watch and a bird (possibly a raven?). It’s a symbol rich with meaning as the arms simultaneously reach downwards to clawing souls and upwards to the heavens.

It was this prior work of his and all the influences behind it that Palmer looked to when coming up with the visuals of The Cairn. It’s a 2D action-adventure that follows a skeletal child that emerges in a twisted land populated by insane skeletons. Palmer started off by using a range of colors but found himself being pulled towards emulating woodcut techniques in his drawings. This led him to re-examine the woodcut paintings in the context of a videogame: “All the information was there, the highlights, the blackest black areas, the middle tones,” Palmer says. “It all came from mark making, and it felt hand-made just from looking at it.”

“there is a natural ambiguity that comes with woodcuts”

Following his heart, at one point Palmer decided to complete the throwback entirely, making everything black-and-white and using only sharp, sketchy lines to depict the world of The Cairn and everything in it. He’s since noticed two distinct benefits in doing this. Firstly, it’s a lot less time-consuming when creating a scene and animating characters when you don’t have to color everything in. But secondly, and more profoundly, Palmer says “there is a natural ambiguity that comes with woodcuts that fits the themes of the narrative. You wake up in a world that has undergone a change for the worse, you don’t know why these things are attacking you, you don’t know where the next door will put you. I like that a lot.”

There are also more explicit tie-ins made between The Cairn and the medieval art it takes from. Most obvious is the skeleton population, but in the screenshots and gifs of the game’s development that have been shown so far it’s possible to see fleshed people pinned to poles (by what looks like tree bits) for what is presumably a macabre reason. There’s also a ravaged bareness to the land expressed in the crooked dead trees and lonesome empty huts that’s easily compared to the muddied wasteland in “The Triumph of Death,” sans the rotten remains left hanging from branches.

As it’s still early days for The Cairn there’s plenty of experimenting that Palmer is left to do with its art style. Recently, and as you can see below, he’s been adding much darker areas in which the dominant white becomes secondary to an overwhelming blackness. Shadows for the creatures are another new addition to its look. The creatures themselves are also being expanded still. There are shepherds with flocks that defend them, an uneasy hunched-over being that hides its presumably disfigured form under sheets of cloth, and a depressed skeleton stroking a skull-faced cat.

It’s fascinating to watch as it’s all brought to life. Or should that be death? In any case, if you want to keep up with The Cairn you can follow it on TIGSource, Tumblr, and Twitter.