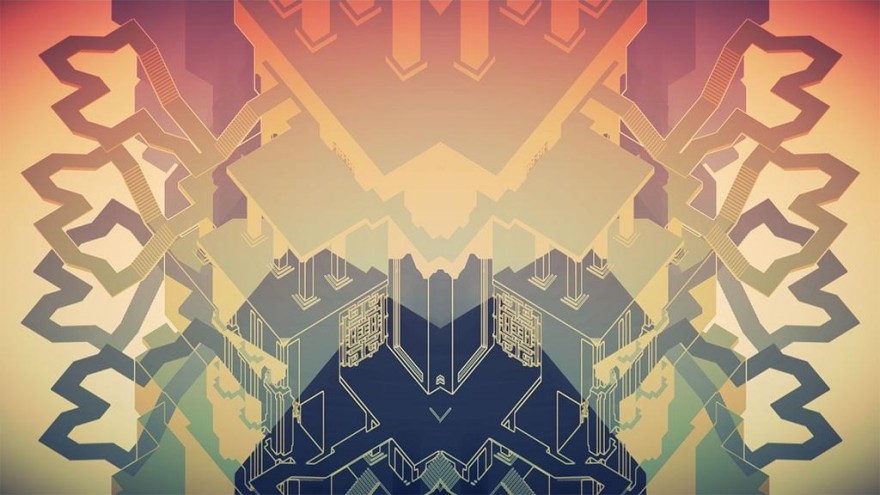 Over the weekend, Willy Chyr encountered a rare and beautiful demon inside the code for his upcoming spatial puzzler Relativity. Beyond being a mere bug, this unknown corruption has emerged from a new shader Chyr was toying around with while creating a series of conceptual screenshots he deemed the “Rorschach Test Series.” When he accidentally set the camera size too small, Chyr saw that the shader proceeded to warp the virtual architecture of the game into striking serendipitous tableaus on its own accord. It dwarfed his initial experiment.

Rather than trying to eliminate the effect, as he presumably would with any other bug, Chyr has embraced it (he’s even turned it into desktop wallpapers). “What is even happening!?” Chyr tweeted. “I seriously can’t believe this… every angle and color combination is absolutely gorgeous.” He’s right. The bug seems to have an artistic eye. Divorced of human intent, the software has fragmented and discolored itself in ways Chyr probably wouldn’t have, creating alluring mutant children out of the malfunction.

wouldn’t be amiss among Islamic art.

In the images that Chyr shared, we can see that sometimes the corruption frames the architecture as a panorama. It’s as if it wants us to observe the complexity of the floating staircases and towering columns, all of which appear only as blueprints now due to being reduced to outlines. Meanwhile, an abstract paint-like diffusion of violet, peach, or veridian shades fill in the blank spaces between the lines, inviting us to enjoy shape and light separately, or to merge them as an unusual overhead map.

Other times, the camera is zoomed-in, allowing space for a single architectural expression to gain its own character. An endless vertical staircase turned on its side becomes a criss-crossing pattern that wouldn’t be amiss among Islamic art. A temple-like structure complete with a triangular roof and support columns sits with importance at the center of the frame surrounded by shadow versions of itself. Suddenly, these angles and shapes that previously had their individuality overshadowed by being part of a mass of virtual carved stone, are randomly chosen as specialized purveyors of architectural beauty. And, boy, how they perform when put on the spot.

You can see the images that Chyr shared on Twitter below.