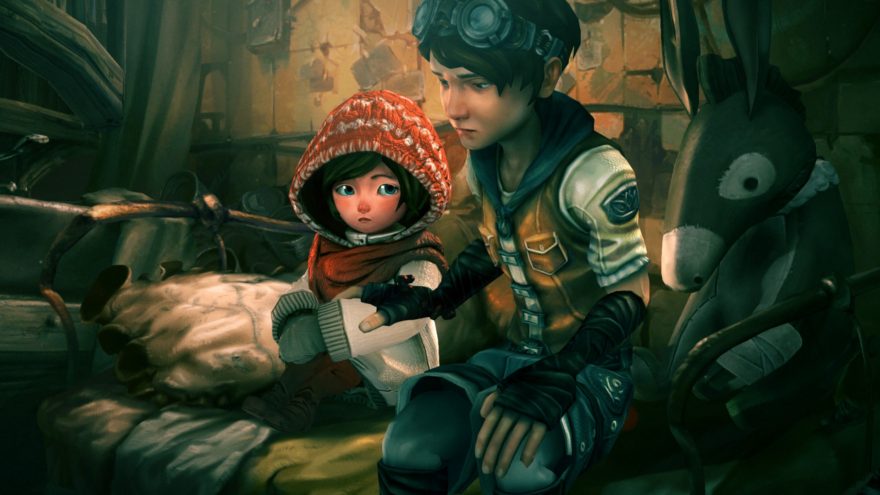 Videogames have a history of being terrible at depicting young girls. The problem is usually that the designers want you to care about them, to want to safeguard them, but try to engineer that in the most obnoxious way. Either they’re being used as zombie bait like Sherry in Resident Evil 2 (1998), or their insistent squeals are beyond annoying—see Katey in Dead Rising 2 (2010).

One game that gets it right is the newly-released adventure game Silence. At its center is a sibling relationship that’s delicately handled, and it even manages to pull off a heartbreaking payoff at the game’s end (depending on your final decision). Wondering what the difference was with this game when compared to others that depict little girls, I spoke to Marco Hüllen, the creative director of Silence, and quickly located what is likely the source.

“The idea for the game was conceived right after I became a dad,” Hüllen said. “Like every father, I would do everything for my child, and I was wondering how far I would be willing to take that and how these kind of hard choices would change me as a human being. In the game, it is Noah who is faced with this situation. He has to make a decision that will bring great sorrow to others, but will save his beloved little sister Renie. That decision will change him, and it will change how his sister sees him. Ultimately, he will become a different person.”

Hüllen only touches on what makes the relationship between Noah and his little sister Renie special. In fact, he’s only really talking about the ending, which only works because you genuinely care for Renie by that point. This is achieved by how the siblings are both there for each other when it’s most needed. It’s not a one-way relationship as it would be in other games; Noah no doubt being the heroic big brother constantly getting his sister out of trouble, with her constantly crying with wide eyes into the camera.


It starts off that way, mind you, with the pair of orphans victim to an air raid on their city, separated from their friends, and stuck inside their makeshift living space. Your first task is to help Noah comfort Renie, to stop her crying, which he manages by putting on a puppet show and feeding her imagination. But after that the game flips the tables as the two of them enter the land of Silence—a fantastic place that exists between life and death.

The difference in this dreamworld is that Renie is unable to be seen or heard by the monsters of Silence, and so it is the young girl who must help everyone out of any sticky situation they might get themselves into. In my experience at least, it’s easier to care for someone who doesn’t rely entirely upon you, someone who is a friend rather than a chore to deal with. It also helps that each character thanks Renie for her help, being surprised by and admiring her bravery, and usually playing with her or hugging her afterwards as a gesture of their growing relationship.

But it’s not just a case of empowering Renie as a little girl; that’s only a part of what makes her successful as a character. The way she is able to comfort her brother when he is faced with his fears is another big factor. Renie plays the two-way tennis game that comprises any relationship, the give and take, whereas the more annoying videogame girls before her only took; in fact, they begged, sobbed, and screamed. When Noah finds himself on the edge of a drop, facing his fear of heights and an imminent panic attack, Renie moves in to help him through it. And so when you play as Noah and perceive that Renie is in trouble you rush to her in order to return the favor.

Another aspect of the game that works in Renie’s favor is that, while it is cute at times, there’s an underlying brutality to the game’s world. This might be best demonstrated when the game has you perform CPR on one of the characters. A more lighthearted game would make a joke out of it, perhaps having the unconscious character wake when Noah is about to perform mouth-to-mouth resuscitation. But that levity never comes and it leads to a moment of panic—the game actually wants you to perform CPR to save this character’s life, there’s no messing around.

“it was very important to us to just hint at violence”

Talking on the game’s brutality, Hüllen said “it was very important to us to just hint at violence. The idea, or rather the threat of it is necessary to set up the story and the situation of the characters, but it isn’t what the game is about. Sometimes a horrified expression on the face of one of the beloved characters is worse than the horror itself, because it allows players to experience it through the characters and to empathize with their fear. We hope that it will invite them to feel protective about them, and to bring out the best in themselves.”

Hüllen and his team used a technique called “projection mapping” to project hand-painted images onto 3D models to create the characters. This allowed them to give the characters a lot more facial expression than the techniques they’ve applied to games in the past, such as The Whispered World (2009), the game that Silence is a sequel to. It’s made a big difference and to the power of the storytelling and has enabled the team to really focus on that aspect of the game rather than the fussy puzzles of traditional adventure games.

“Back in time we could discuss puzzles with our friends for weeks on end and had a lot of time to solve them,” Hüllen said. “With the internet, the solution to every puzzle is only a mouse click away, and the availability of walkthroughs is spoiling what used to be fun about adventure games. But we wanted to preserve that fun. Thus, we put the focus of the game on the flow of the story and the way to experience it. There are still puzzles to solve, and some of them are challenging, but they will not disrupt the story and the player’s immersion into it.”

Having played Silence and being the kind of person who regularly gets frustrated by the item-juggling puzzles of adventure games, I can confidently say that what Hüllen said here is backed up in the final game. It might be the only adventure game that didn’t piss me off at one point with an obtuse or daft puzzle. That may not be to the liking of adventure game fans who have come to accept and got used to those kinds of puzzles, but for anyone who is plays the genre for its story, it’s a big relief.

You can find out more about Silence on its website. You can purchase Silence for Windows and Mac on Steam, GOG, and the Humble Store.