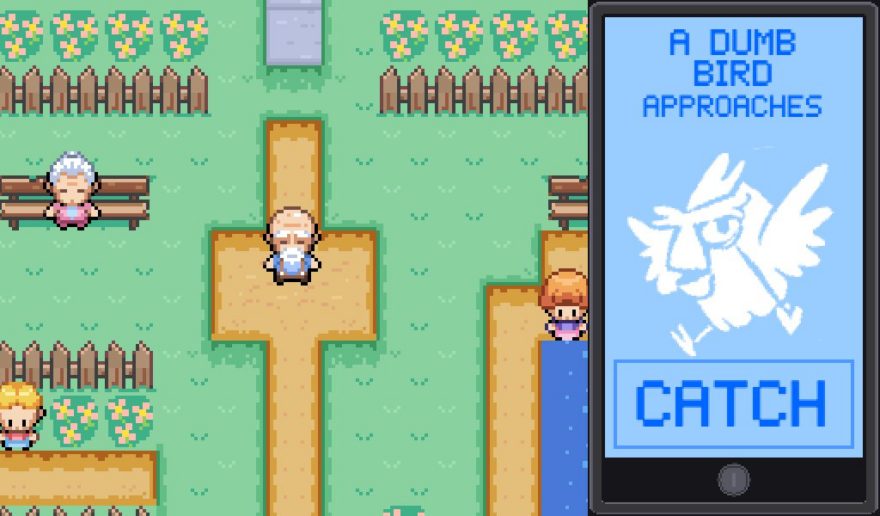 My nana called me up in a panic when Pokémon Go was first released. The news was reporting on stories of kids getting robbed while playing the augmented reality game. I’m sure you remember. Now, I’m no kid … I’m nearly 30 years old. But my grandma wanted to warn me—needed to warn me—about the potential dangers I was putting myself at risk of. “Bad people will try to hurt you, Nicole,” my nana said. “You don’t know what could happen to you if you play that game.”

That’s what Clayton Chowaniec’s That Pokeyman Thing is about—being an old person who is very, very confused about Pokémon Go. You’ll play as the old guy, a grandfather, who’s got a grandson deep in the augmented reality game. He gives you one of his smartphones (he’s got 12) before he runs off to catch ’em all.

Literally a ball with a face

You’ll chase after him, albeit, at a reasonable pace. You’re a sweet old man, after all. Kids won’t let you pass through checkpoints without showing them your rare Pokémon, so you’re forced into playing the game. If you want to find your grandson (and you do—or else your daughter will put you in a worse nursing home), you’ll need to find yourself a Peekachorps, an Idiot Rat, or Literally A Ball With A Face.

The whole thing, visually, is a nod to the pixely world of Gameboy Pokémon games—complete with 8-bit music by William Crawford.

“When two persons in search of a Pokémon clash at the corner of Sunset and San Vicente, is there violence? Is there murder?”

Werner Herzog is one old guy confused by Pokemon Go. Chowaniec created Pokeyman as a response to Herzog’s amazing response to Pokémon Go, and as a contemplation of his own mixed feelings on the game. Chowaniec is caught between two conflicting ideas—”is Pokémon Go a shallow time-waster, or an amazing watershed moment in gaming that makes life more fun and brings people together?” Probably both, Chowaniec, probably both.

That Pokeyman Thing is playable for free. Visit the Punch the Moon website for more of Chowaniec’s work.