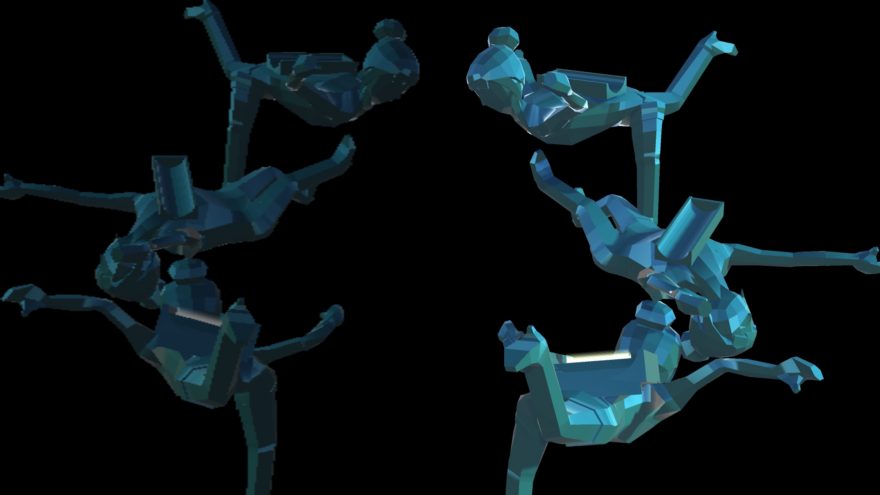 There really aren’t enough videogames about the physical constraints of the body. We have so many games about wonderful bodies: those that can jump high and run fast, that are shot at with bullets and cannonballs yet miraculously heal of all injury seconds later, bodies that move frictionless throughout the length of their virtual existence. Where are the aches and pains of aging? Where are the stretch marks and permanent pressures of contortion?

It’s the inconsequential freedom of bodies in videogames that is often the greatest source of their fantasy. We would probably all act recklessly in reality if we could be assured that pain and death were temporary states, solvable by chomping on a mushroom, or leaning against a wall for a moment. It’s in its consideration of our physical bodies, the flesh and bone that we are forced to live in, that marks Spherical Constitution as special.

you can imagine the crunching of the spine

To describe it is easy: this is Marble Madness (1984) except the surfaces you roll the ball across are people’s living bodies. It might be the palm of a hand or a whole back, acting as a malleable runway for you to manipulate with your mouse, tilting the contours so that the ball rolls into the hole—an almost disturbing invasion at times. Sometimes you have one body while another level might give you three bodies, balanced atop each other as if gymnasts, limbs splayed all over, outfitted with roads and ramps.

One of the creators, Dennis Carr (the other two being Claire Carré and Longxiao Li), has said that Spherical Constitution is about physical pain, compulsion and contortion. You can feel this as you squish a person in half to create a valid surface for the ball to travel across, at which point you can imagine the crunching of the spine and the pull of the leg muscles that the position would induce. People are treated like puppets but aren’t divorced of feeling; utilized to meet a videogame’s needs at the expense of their comfort.

As the virtual body expresses its mimicry of physical pain you might be reminded of how we abuse our own bodies. We’re not all performing artists but many of us do see it necessary to stretch our limbs to remain limber at the gym or during yoga. Perhaps your job requires you to strain your body through repetitive action or compromising positions. Spherical Constitution makes ground towards videogames that consider the fragility of our physical bodies rather than glorifying a form so fantastic that only a rare few in the physical world could ever match it.

You can download Spherical Constitution for free on Glorious Trainwrecks.