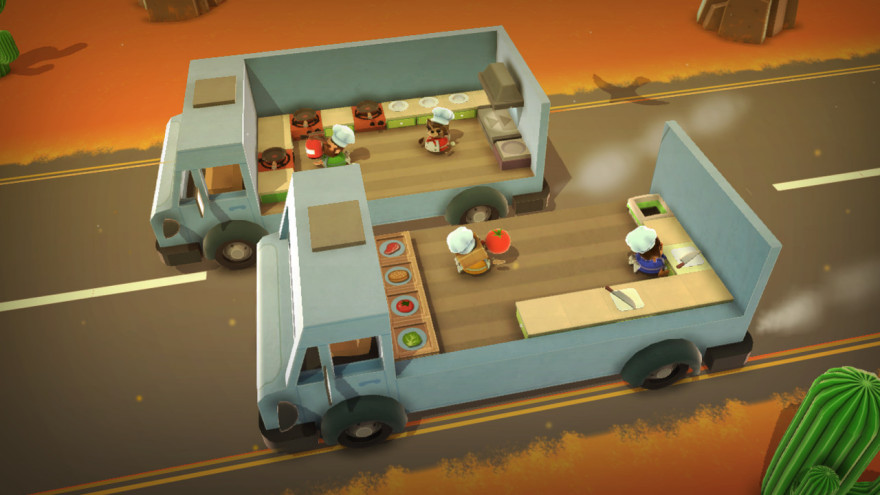 The Chairman looks out over the assembled chefs in their whites and tall hats and announces that the secret ingredient is … meteors! Kitchen Stadium is now in space. It’s like the kind of dream you’d fall into after spending a late night huddled around a small TV in your bedroom watching Iron Chef. Except it’s multiplayer and coming soon to PC.

Iron Chef, in its wildest imaginings, never actually put chefs on ice-floes and demanded that they appease an ungracious audience. But then, Iron Chef is not Overcooked—the new couch co-op game for 1-4 players from Ghost Town Games. While reality television will have them make children’s food out of monkfish, Overcooked is willing to literally throw their cooks into the bowels of hell and demand a proper risotto. Possibly because they’re made of pixels rather than flesh, but there’s little that reality kings won’t do for ratings.

With reality cooking shows finding new ways to torment their captive CIA graduates, (episodes of Chopped have required contestants to cook while on a treadmill) it’s little wonder that videogames have taken the situation to its logical conclusion. Cook while moving between speeding trucks. Or in the middle of an earthquake. Or on a bucking pirate ship. Wait ’til the Food Network gets a load of this.

the real struggle of being a line-cook, now with optional friend murder

In case this all sounded too easy, Overcooked allows for the culinary masochist to control two characters on the same controller (or split the difference with a friend). Experience the real struggle of being a line-cook, now with optional friend murder. Finish quickly and correctly and you’ve found yourself to Michelin Star success. Fail and your customers will leave to find a new restaurant. In hell?

Overcooked will be available on PC and consoles soon. You can currently check it out on its website and over on Steam.