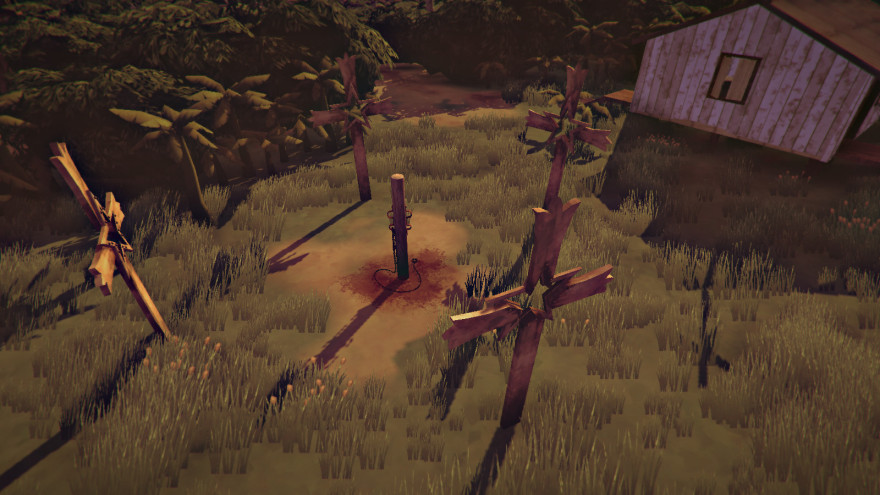 In The Church in the Darkness, you play a man looking for his nephew outside the borders of his own country. The lad has gone to a commune or cult in South America called the Collective Justice Mission, a group led by a charismatic married couple. The parallels to America’s third most famous cult—the first two being Scientology and the Apple corporation—are readily apparent.

In 1974, Jim Jones led the Peoples Temple to South America to found Jonestown, a name most Americans would come to associate with tragedy. But Richard Rouse III, who leads the team creating The Church in the Darkness, was interested in the Jonestown massacre for more than just the infamy. “A lot of the stuff he was saying was of the progressive bent. He was for reintegration, he was for taking care of your elders, he was against the Vietnam war. You hear all the things he was saying, and it makes you think—what happened? There are a lot of positive things about the People’s Temple, and then it all went wrong.”

a dangerous group of believers headed towards a dark end.

From his research, Rouse says the line between an apocalyptic death cult and a harmless commune can be razor thin. “The interesting thing to me about these religious sects and extreme progressive groups is that they say a lot of good stuff,” said Rouse. “And I think they mean it, usually. Some groups go a dark way—the leaders get consumed by egomania and start going down an apocalyptic path. But then another group, the ones we don’t hear about as much, they’ll just keep going. There are communes in California that have been going since the 60s.”

So which of these categories does the Collective Justice Mission, the cult in which the player’s nephew in The Church in the Darkness is ensconced, belong to? The answer will be different for each player, as the beliefs of the group are determined anew at the start of each play through. Some games will center around a functioning, if insular, commune of people seeking to escape a country they feel has persecuted them. Others will concern a dangerous group of believers headed towards a dark end.

Rouse himself isn’t a practicing Catholic. “I’m from the left wing of the Catholic Church,” he jokes. In the context of the game, his religion seems more of an information source than a driving force. “Having read the bible, there’s so much stuff to pull from,” says Rouse. “You can get what you want out of it. The people in the game are socialists, and they’re pulling from the socialist parts of the bible.” He’s careful with his language—Rouse previously wrote for big budget productions like The Suffering (2004), which could afford blood and guts but not a strong political statement. The habits are still apparent.

But there’s more than just a fear of alienating his audience to Rouse’s caution. He isn’t trying to take a stand morally or politically, or if he is, the stance is that the issues he’s discussing cannot be easily captured in a pithy statement. The Church in the Darkness is, more than anything, about moral grey areas, and the minute changes that can take an admirable set of ideals spiraling into tragedy in ways we have historically seen before. “I’m worried about people thinking this game is bashing socialism, or bashing religion,” says Rouse. “It’s not about that. It’s about figuring it out—because it’s complicated.”

You can find out more about The Church in the Darkness on its website and Steam page. Check out our ongoing coverage of GDC 2016 here.