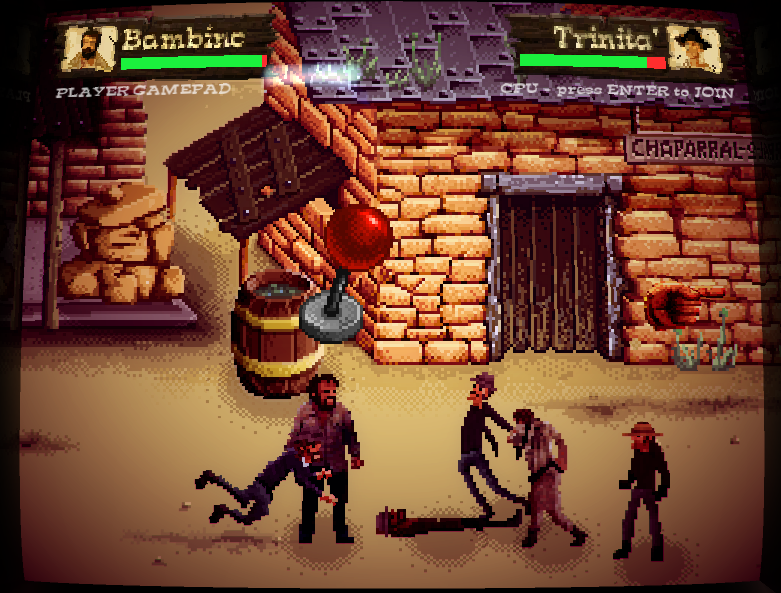 Bud Spencer and Terence Hill, the Italian movie stars known for three decades of action-comedy, always deserved a videogame. A classic Spencer and Hill scenario is a mass brawl, the pair squaring off against a jittering hive of incompetent opponents, each punch over-exaggerated in gesture and sound effect. Smacks landed with mouth-sounds: a “THWIP,” a “BOOM,” a “KERR-ASH”. Each opponent was another stunt, another gag, another way to combine goofy violence with prop comedy.

flipping an entire person at the end of his hooks

It’s everything an arcade beat ’em up ever was sans the pixels. And, yes, to be fair, Bud Spencer did have a videogame starring him made once. It was based on his 1997 TV series “We Are Angels” and shared the same title. It had you guiding Spencer across six scenes, running and jumping to avoid prison guards and the hostile tribes of a jungle for whatever reason. But look at this thing. It’s not the game that Spencer deserved.

We can rejoice now, then, that a small Italian team has finally produced the Spencer and Hill videogame that should have been shouldering Streets of Rage. Made for Indievault‘s Spaghetti Western Jam, the demo for Schiaffi&Fagioli that’s currently available, recreates the archetypal scene from one of the pair’s movies. They’re in a small western town, people are angry with them, a fight breaks out.

What’s more wonderful than the integrity of the scenario is how the fighting styles of the two stars has been detailed. Hill, the smaller of the two, would mainly duck and dodge with a grin sucked to his face. In this game, he struts a quick-step with hands on his hips, coolly throwing headbutts and quick punches.

Spencer, on the other hand, was so big that he squashed the tops of skulls with the side of his fist as if it were a game of whack-a-mole. This signature move gets its own button. His large strides and hulking shoulders also capture the presence he brought to the camera—a common sight would be Spencer flipping an entire person at the end of his hooks, or turning madly to deliver regret to whoever it was that hit his brick wall of a back when it was turned.

Another interesting detail, deliberate or accidental, is that you can have Spencer and Hill hit each other. It’s not something the pair typically did but the chaos of a fight sometimes lent itself to a gag in which they faced each other angrily before realizing their mistake. Here, in a videogame, it rides that precarious line between humor and frustration. Players can reduce each other’s health bars if they were annoyed at each other or simply wanted to wind the other one up. The latter is how I imagine Spencer and Hill playing their own beat ’em up together.

You can download the demo of Schiaffi&Fagioli for free on itch.io.