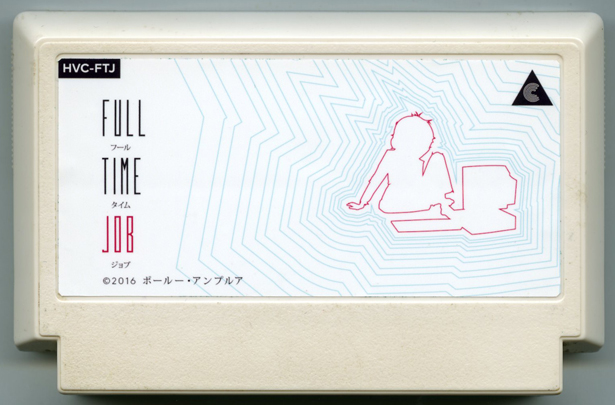 The A Game By Its Cover jam, which finished at the end of July, gave game makers a month to create a game based on of a Famicase game cover. It received 127 entries, some of which were as far off the map as Parachute Pete by grille, Dungeon of Flowers by neilmakesgames, and Secret of Love by nadia—which, by the way, is a “Lesbian based punching simulator.” Among such an eclectic collection of games, Full Time Job, a game about job seeking by Dylan Gallardo, looks decidedly less glamorous.

Gallardo takes the mind-numbing task of job seeking and dilutes it to the minuscule elements of randomness and imperceptible difference that makes actual job hunting so stressful. Staring at 40 versions of the same form begins to blur and color after a while anyway, and that’s exactly what Gallardo has done with the concept. Instead of filling out your former employment history, you’re tasked with adjusting pattern sliders and color wheels to match the undulating design on the left half of the screen.

as questionable as my customer service experience

The number of different factors means that it’s near impossible to match this pattern exactly, and even the ones I thought I’d gotten closest to—one of which was almost entirely black, and, like that one time you didn’t get hired by Target summer of your junior year of college, felt impossible to miss—ended up with scores between 13 (vague but bad, probably) to 60 (much better but also probably bad), with no indication of where I messed up or how to fix it. I guess my estimation of that grey print on blue-green-black-whatever background was just as questionable as my customer service experience at age 16.

Gallardo’s attempt at abstracting the frustration of job seeking is effective, all the more for the way it only took about six failures to send me into a crisis of inadequacy. I’ll probably never get that pattern down exactly right, but that’s fine. I didn’t really want to work at Target anyway.

Play Full Time Job on itch.io, and check out the rest of the A Game by Its Cover jam entries here.