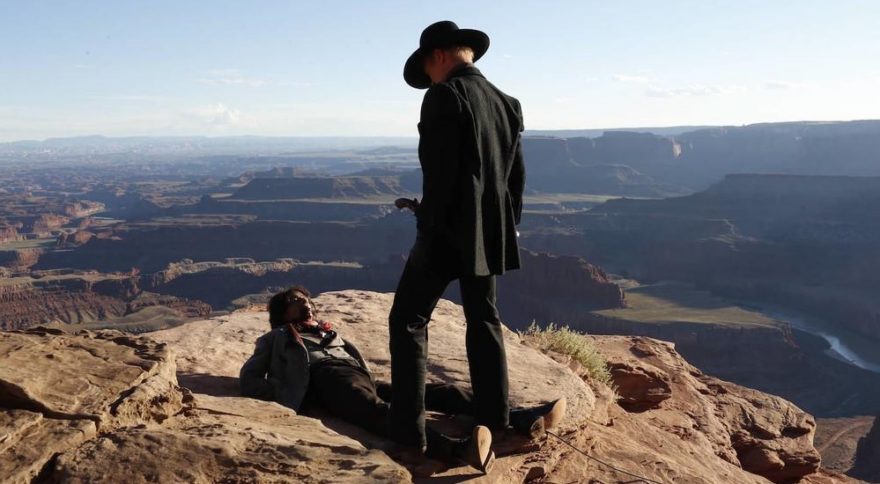 Based on the 1973 film by Michael Crichton of the same name, HBO’s Westworld has taken the original’s hackneyed premise of a couple tourists escaping from the Delos Corporation’s various time-focused theme parks (Medieval World, West World, and Roman World), and shifted it into a refined look at what it means to be human, the nature of memory, and the true extent of humankind’s appetite for depravity.

With “over 100 interconnected storylines” programmed into the park’s daily routine, the world they’ve created resembles a heightened version of the storytelling that players of modern RPGs have grown accustomed to. That connection to videogames isn’t a stretch, as writers and showrunners Jonathan Nolan and Lisa Joy told Vice that they were inspired by Bethesda’s Skyrim (2011) and Rockstar’s Red Dead Redemption (2010). In particular, they draw on the sprawling western landscape o the former, full of morally-conflicted antiheroes and villains, and the latter’s myriad plot lines just waiting to be discovered by players

The result is a story not unlike what the development teams on those games must have gone through when building their worlds. Stars Jeffrey Wright and Anthony Hopkins wrestle with how best to maintain the illusion of reality to their players, termed “visitors,” while also keeping those story lines moving. Of course, the main difference being that the developers at, say, Irrational Games never had to worry about the inhabitants of Rapture finding out that they’re not actually real and turning on them when creating BioShock (2007).

While Wright and Hopkins’ characters bemoan previous versions of robots that repeated themselves, broke down, or froze, they work to create a more fully-realized recreation of humanity, even going so far as to implement a software update creating the digital equivalent of memories. The series opens as that software update is causing unintended consequences, whether it’s a fly turning a sheriff into a gibbering mess or a homicidal maniac growing more bloodthirsty than expected.

In the first episode, “The Original,” we see how carefully-laid each of those story lines can be, as Delores, played by Rachel Evan Woods, proceeds through her scripted day multiple times, each with varying outcomes depending on who she runs into—all based around player interactions. In a scene that mirrors the way videogame players often gleefully discover ways they’re able to bend and break a game’s coding, a particularly high-stakes, emotive moment is cut short by a player’s clumsy interruption as he cackles away to his gawking wife.

While only two episodes are currently available, Nolan and Joy seems to have created a world that feels just as lived-in and fleshed-out as the interactive stories they drew inspiration from.

Westworld airs on HBO on Sunday nights at 9pm, and the first episode is currently online for free at HBO.com.