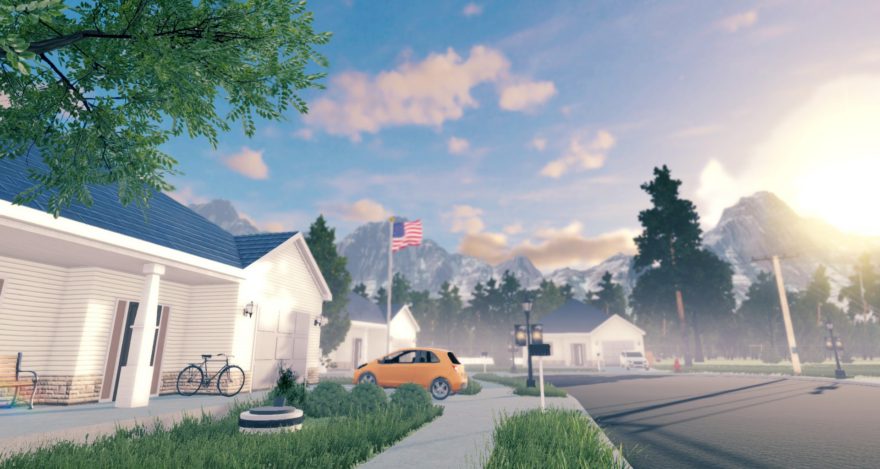 Before I had even watched Groundhog Day (1993), my childhood was fringed with the fantasy of alternate experiences of time due to a British children’s TV series called Bernard’s Watch (1995-2005). Bernard, the lucky bugger, had a stopwatch that could freeze time. Each episode he’d perform this miraculous feat, usually to enact some good deed, or at least get himself out of trouble. Thank god it was good boy Bernard that had the watch and not someone more perverse, eh?

The image that sticks with me the most from that show is Bernard running across a grassy field as someone frozen in time flies a kite (also frozen in time). The teaser trailer for upcoming game Escape the Loop took me straight back to that image and those childhood fantasies. As you can watch below, the trailer shows a white picket fence neighborhood paused indefinitely, only the camera moving as it zooms around the tableau: at one point some dude is seen midway through being thrown off his bike—he shouldn’t be cycling on the pavement anyway.


But Escape the Loop‘s temporal puzzles don’t involve time being stopped as the trailer depicts. Its time-based fantasy is a little more harrowing, as anyone who has watched Groundhog Day (or that one Xena: Warrior Princess episode) will know. Yep, you’re stuck in a time loop and have to escape. But unlike Groundhog Day you don’t get a whole day before the loop is reset—you only get five minutes. Ideal for a short experimental videogame.

“Everything resets. You keep nothing”

When time does reset in Escape the Loop, nothing you did previously will be recorded, nor will it reappear during your next attempt at breaking the loop. “Everything resets. You keep nothing,” as the game’s description reads. “Except your memory of past loops.” The idea, then, is to explore how you can interact with those five minutes to cause different sequences of events. If you do nothing then the loop will be exactly the same, but the same sequences can also be repeated if you perform certain actions at certain times. From this you can build a working knowledge of the different possible outcomes of the loop to use to your advantage.

Escape the Loop isn’t the only game messing with time in this way. I’m not talking about Majora’s Mask (that was years ago) or this year’s SUPERHOT, which tied the progression of time to your movement, but am talking about The Sexy Brutale and the upcoming Twelve Minutes. Both of these are temporal puzzle games with a time loop that you’re tasked with escaping. Except in both of these there is a big consequence to your failure: in The Sexy Brutale you’re trying to stop a series of murders at a masquerade ball, while in Twelve Minutes you’re trying to avoid being arrested in your flat. Escape the Loop may well have a similar incident at the end of its five minutes but it’s not on show yet—though I do spy what appears to be a nuclear bunker in one screenshot.

No matter, as Escape the Loop will be coming to Steam Early Access shortly, with a view for the full version to be released by the end of 2017.

Find out more about Escape the Loop on its website.