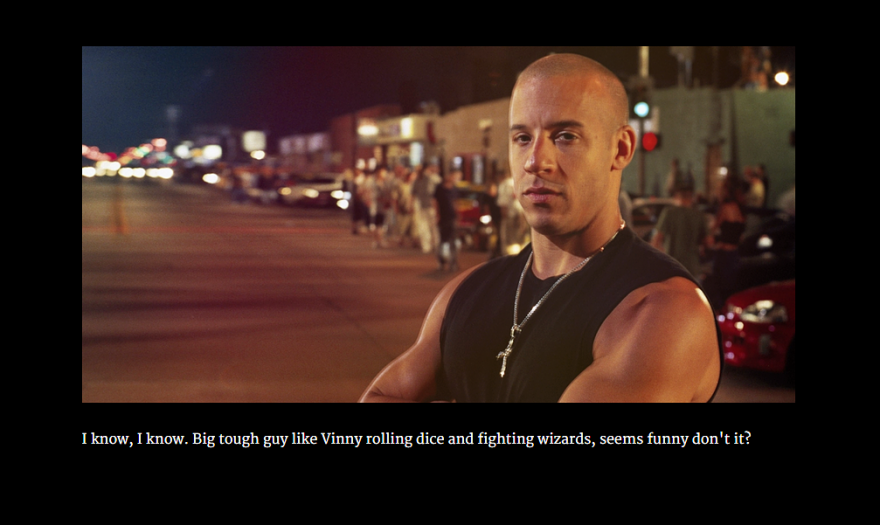 Action star Vin Diesel is one of Dungeons & Dragons’ most eager and vocal advocates. He’s talked about the years he has spent playing the tabletop RPG in many interviews with an endearing frankness. As a stretch goal for funding her new book, Videogame for Humans, game developer Merritt Kopas grabbed onto Diesel’s famous nerdy predilection to create Vin Diesel DMing a Game of D&D Just For You. The game is a text adventure in which the xXx star guides you through an encounter in the woods. Like the man who starred through three Chronicles of Riddick movies, this game approaches D&D from a place of reverence, creating a surprisingly earnest exercise in affirmation.

“A few people told me ‘I was waiting for the twist or for it to be a big joke,’” said Kopas over a Skype call. “I think we really haven’t explored making games that are sweet, affirming, meditative experiences.”

Dungeon Master Vin Diesel is nothing like the DM I spent many high school evenings aggravating. He is patient, reassuring, and generous. Watching placid pictures of the muscled star of Boiler Room lead me through an encounter in the woods was incredibly relaxing.

“Everything I’ve heard about him seems like he’s this really sweet guy who happens to play these really gruff roles,” Kopas said when I asked why she’d decided to make Vin Diesel so affirming. “When I was searching for images I was like a lot of these are just him smiling and looking like he’s having a great time, so I just moved from there.”

On its itch.io site, the game is tagged with the letters ASMR, which stand for Autonomous Sensory Meridian Response. ASMR is a perceptual phenomenon where pleasurable tingling sensations occur on the scalp or peripheral regions of the body in response to various stimuli. It can be triggered by physical closeness, personal attention, touch or quiet sounds, to name a few. I am a person that experiences ASMR, and it was definitely triggered by my short time of close personal care from the fictional Vin Diesel.

Kopas said taking advantage of ASMR was a way to make her Vin Diesel DM tender while avoiding disappointing those expecting a joke. “It’s hard to be earnest or sweet. I felt like [ASMR] was a back door into that because it was a form that people understand,” she said of her choice to label her game. There is a growing ASMR community online, including YouTube videos designed to trigger the sensations of those that experience it. However, Vin Diesel is an anomaly amongst a group that mostly consists of women. “Most of those [videos] are by women and there’s a definite gendered component to that,” Kopas said. “But I think when you put a guy like Vin Diesel in that position instead it changes that experience for people.”

Creating Vin Diesel DMing a Game of D&D Just For You was as much an act of relaxation for its creator as its players. “I’ve felt so much pressure to make a certain kind of work the last few years,” said Kopas, whose previous work includes Consensual Torture Simulator and Obeissance, based on the works of philosopher Simone Weil. Vin Diesel DMing marks a new personal line of game creation for Merritt Kopas. “I just want to pursue little jokes like this and see where they go and do things that people don’t necessarily expect or aren’t asking for. I’m doing whatever I want and it’s really liberating.”

You can purchase Vin Diesel DMing a Game of D&D Just For You on Merritt Kopas’s itch.io page. To learn more about her collection of conversations with Twine developers, Videogames for Humans, check out instar books’s website.