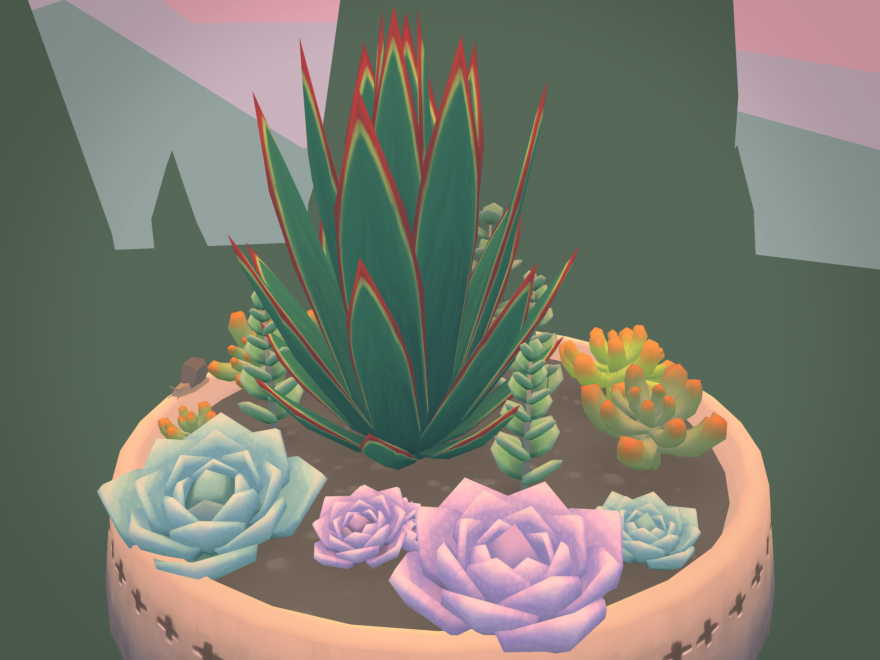 When Ice Water Games launch Viridi later this summer, polygons will give way to carefully crafted stems, leaves, and petals, projecting out of the base of an equally pleasant pot of your choice. Flat yet strong colors, along with the feeling of lightness, achieved partially through an emphasis on pastels, will fill in the tender outlines of the agave, aloe, hens and chicks, echeveria, zebra cactus, and other varieties of greenery that you may choose to nurture.

The game aspires to serve as a therapeutic respite

Viridi is a game about planting succulents, or thick, fleshy, water-retaining plants, and participating in and admiring their growth. It has been compared to Mountain in the way that it is also very much about enjoying the art that makes up the game. Kevin Maxon, the founding developer, isn’t quite comfortable with that comparison, though, and explains that the game is much more like a Tamagotchi, “though with a lot less nagging, and with the intention of fitting into a functioning adult’s life.” The game aspires to serve as a therapeutic respite from the never-ending emails, chaotic task boxes, and the ubiquitous ad assaults that consistently demand the majority of our screens and attention.

“We spend a lot of time on [social media] during our day-to-day lives giving ourselves distractions,” Maxon says. “We want to make Viridi an alternative place to go, either to alt+tab to when you need a break from your work, or to open on your phone when you’re sitting in a waiting room. Viridi can live on your second monitor at work or in your pocket on the bus.”

Viridi’s latest trailer, which can be viewed above, features a smooth rotating camera that captures kind, silhouetted backdrops behind neat digital life forms, and soft beats that round out and complement the aesthetic. Zoe Vartanian, creative director on Viridi, points to Seattle-based artist Pam Wishbow and Grow Home as part of her visual inspiration deck.

Viridi also borrows from the team’s previous games, Eidolon and The Absence of Is, in its tempo and tone, and in its call to nature. But Viridi sets itself apart in how it communicates and interacts with the player. There is hardly any text; it’s mostly just you and your plant. The goal is to truly slow down, survey, digest, and enjoy an intimate relationship with new friends.

Grace can be noted in how the game will allow players to ignore the plants for weeks without interaction. Of course, neglecting your plant will eventually lead to deterioration, while regular care promotes bloom and development. But while some consideration is given to the real world properties of the various forms of verdure, Viridi is designed to be more intuitive than it is a simulation. Maxon sums up, “Viridi acts somewhat like a real potted plant, but it’s ultimately an art piece.”

Ice Water Games is still hard at work determining which features will make it into the final build. Remaining are choices about when to make new plants and pots available to the player and whether or not specific playthroughs will sync between multiple devices. “We really like the idea of people getting to try Viridi out for free, but we also found that including the plants as unlockable goals made the player focus on achieving those goals rather than caring for their current plants,” says Maxon. For now, as this is all being worked out, we can enjoy some new vibrant visuals and sounds from the recently released trailer.

You can find out more about Viridi on its website.