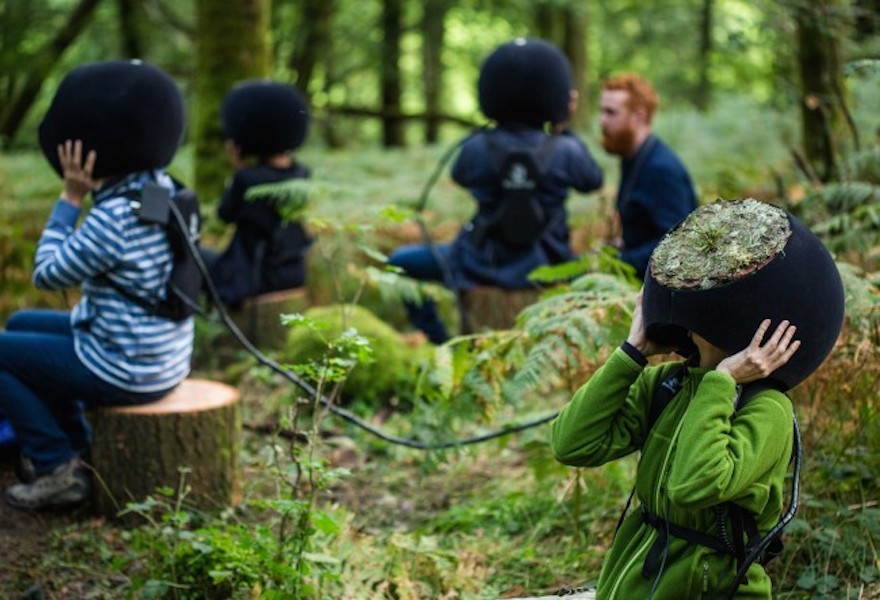 One of the more pervasively annoying themes in back-to-nature stories such as Avatar or Ferngully is the insistence that technology is inherently corrupt and that our reliance on it stops us from experiencing the supposed innate goodness of the natural world. It’s a saccharine and played-out bit of storytelling that seems oddly ashamed of one of our greatest advancements as a people and which ignores the many new experiences technological innovation allows us. Every time I see a film like this, I feel compelled to challenge the filmmakers to spend a month in the forest without showers, and then see if they still feel the same way afterwards.

such a breath of fresh air

That’s why it’s such a breath of fresh air (heh) for me to see projects like Marshmallow Laser Feast’s In the Eyes of the Animal, which recently graced England’s Grizedale Forest from September 18-20th. Developed for the Abandon Normal Devices festival, the installation allowed visitors to see through the eyes of an animal by using virtual reality and footage captured through CT scans, drones, and LiDar (think sonar, but with lasers instead of sound waves). Situated right in the middle of the forest, visitors donned custom-designed moss, bark, and grass-laden VR headsets that looked more like diving helmets than Oculus Rifts to experience Grizedale through the perspective of either a dragonfly, a frog, or an owl.

“In the Eyes of the Animals gave us a chance to use VR as a first person perspective medium – the ultimate way to hack someone’s senses” said studio co-founder Barney Steel. “Using VR to immerse someone in the sights and sounds of animals creates empathy by simulating the way that others sense the world.”

The whole installation is reminiscent of Spanish art collective BeAnotherLab’s Gender Swap experiment from last year, which allowed users to virtually “swap sexes” by having them wear Oculus Rifts tied to camera feeds from participants of different genders. Except this time, the experience is cross-species, and the Oculus Rifts have been replaced with custom headsets that are as much art pieces as the footage they show.

a harmonious blending of nature and technology

The result is a harmonious blending of nature and technology which pushes back against the narrative that the two are mutually exclusive. As Steel put it, “We’ve always had a hunger for hacking people’s senses by combining art and technology.” Projects like In the Eyes of the Animal argue that human innovation doesn’t keep us from experiencing the natural world, but rather allows us to view our planet through entirely new perspectives previously unavailable to us. It’s a fresh take, and one I hope to see more of in the future.