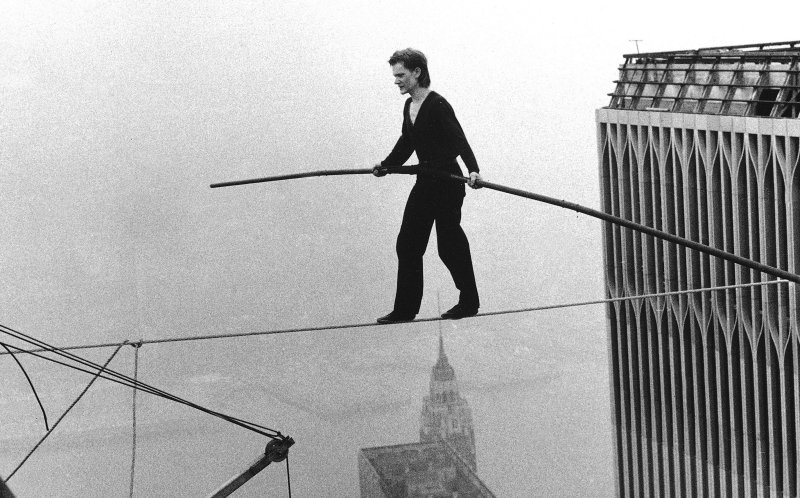 The only safe thing to say about walking a tightrope between two skyscrapers is that it’s a remarkably stupid idea. One wrong move, and splat! A very stupid idea indeed. But therein lies the appeal of such stunts. You might not think it wise to actually walk between buildings on a rope that bears an uncomfortable similarity to the drawstring on your hoodie, but golly, isn’t it fun to watch?

This appears to be the underlying idea behind Robert Zemeckis’s upcoming film The Walk, which retells the true story of Philippe Petit’s high-wire walk between the two World Trade Center towers on August 7th, 1974. Judging by The Walk’s trailers, the film’s Petit, Joseph Gordon-Levitt, is afflicted with an abomination of a French accent but does not have to actually risk life and limb. On balance, this is a very good trade-off.

If you’re in Barcelona, you will soon be able to make a similar trade-off. Can You Walk the Walk is a tie-in with the film that will allow eager participants to retrace Philippe Petit’s steps while wearing one of Sony’s Project Morpheus VR headsets. As its makers note, “Petit trained for years to make his ‘coup’ possible; only in Virtual Reality is such a feat possible for the rest of us.” That’s sort of the problem here: Petit cheated death using incredible talent whereas Can You Walk the Walk is simply cheating. Mind you, if you want to end up in a virtual reality coffin, there’s always everyone’s favourite immersive coffin experience, Taphobos.

There are, however, more compelling videos of World Trade Center stunts to be found. On Monday, a jury found three daredevils who BASE-jumped off the top of the new One World Trade Center not guilty of burglary, the most significant charge related to their sneaking to the top of a restricted site. A video of their 2013 stunt can still be found on YouTube.

BASE-jumping, like high wire walking, is incredibly risky, that’s for damn sure. In his profile of Felix Baumgartner, Vanity Fair’s William Langewiesche notes “BASE jumps start at zero velocity and the jumpers often do not achieve sufficient airspeed to allow for corrective actions before the parachute must open.” However, notes Langewiesche, “because it is fast and close to the ground, it is visually dramatic and an excellent spectator sport.” This assessment is borne out by the video from One World Trade Center, which is stunningly visceral and enough to make you understand why Can You Walk the Walk is alluring. Someone should go and see if a VR experience can compare to real footage with a credible threat of death.