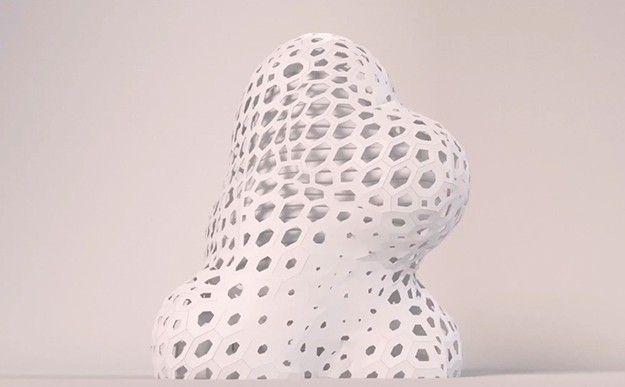 by Psfk
British media art studio Universal Everything is renowned for creating avant-garde and abstract projects. Having previously designed forward-thinking and provocative assignments for the likes of MTV, the Victoria & Albert Museum and the London Olympic Games 2012, their newest work is considered their best to date.

The short film Walking City, overseen by Creative Director Matt Pyke, portrays a sculpture that moves in place and whose shape continuously morphs to reflect the different forms that modern architecture has taken throughout history, particularly depicting the stage it’s at in modern day. The team describe the video as,

“Referencing the utopian visions of 1960’s architecture practice Archigram, Walking City is a slowly evolving video sculpture. The language of materials and patterns seen in radical architecture transform as the nomadic city walks endlessly, adapting to the environments she encounters.”

As the team mentions, the idea of the Walking City was first created by Archigram, an innovative London-based architectural group born in the 60s whose core creative focus included futurism, anti-heroic and pro-consumerism. They largely drew inspiration from technology, enabling their projects to contain futuristic elements and ensuring they were completely ahead of their field for that time.

Universal Everything has now taken this concept and adapted it to modern day. Throughout the video, viewers can easily pick up on infamous architects’ work such as Renzo Piano and Zaha Hadid via intensely abstract visuals of solid blocks and tubular structures.

Watch the video below: