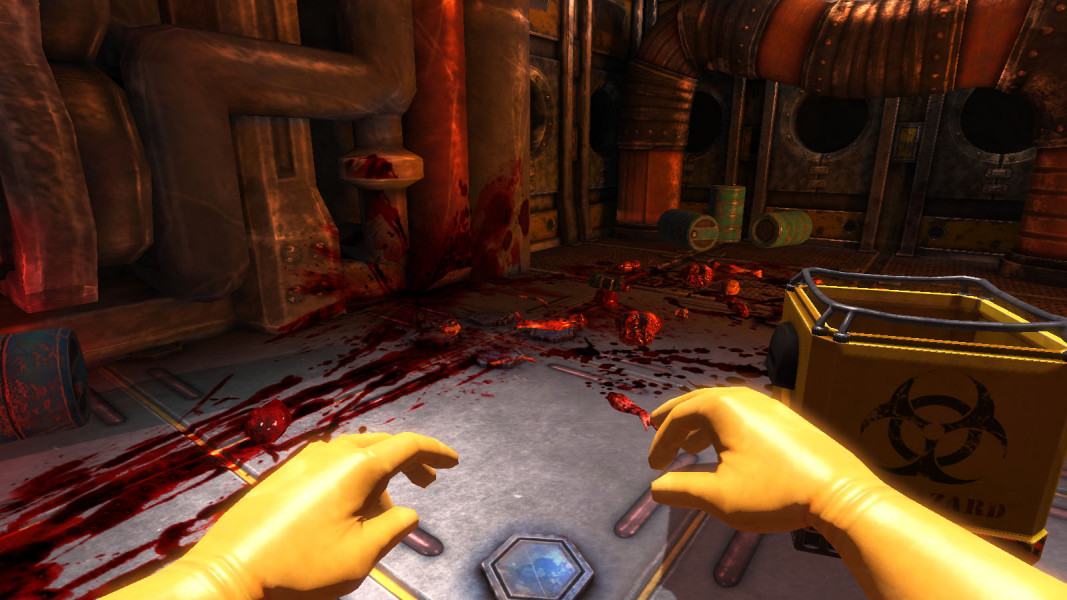 The small team at Runestorm is looking for janitors to sign up for Viscera Cleanup Detail, currently in an alpha build. Responsibilities include but are not limited to mopping up blood and incinerating the entrails of heroes and aliens. Creativity is encouraged. Must be self-motivated and willing to work alone for long stretches. The pay and health benefits are to be determined. And some travel may be required.

These janitorial duties were outlined by the three guys behind Viscera Cleanup Detail—brothers Arn, Nolan and Logan Richert, who handle level designing, programming and scripting, depending on the day. If there’s one thing you should know about the three who make up Runestorm, it’s this: they’re looking to clean up the filthy genre of first-person shooters, starting with a game that’s not an FPS at all. It’s a postmodern critique. Maybe an un-game––something that’s disruptive, a challenge to a medium’s tropes, like a Charlie Kaufman script, or Alan Moore/Dave Gibbon’s post-superhero comic Watchmen.

According to the Richert brothers, Viscera Cleanup Detail is a space-station janitor simulator. “There were a lot of ideas flying around the table, mostly pretty cynical things,” Nolan typed in our Skype interview. The Richerts live in Howick, a small town in the KwaZulu-Natal province of South Africa. “Then Arn said, ‘What if you play as the guy that has to clean up the mess of other games and heroes?’”

That very question parlayed into a game that rejects the FPS genre. Viscera Cleanup Detail lacks combat as well as a prescribed way to win the game, instead focusing on creative ways to accomplish what might be seen as unfortunate tasks. In fact, there really isn’t a narrative. Or is there?

“There’s a narrative?” Nolan asked. “Logan must have snuck that in while I wasn’t looking! I’ll make sure to rollback his changes.”

Arn chimed in: “We try (and are trying harder now) to add the story of what happened to the places the hero and the ‘invasion’ through the maps themselves.

“I’m not sure our janitor actually has a narrative, though. That’s up to each player,” Arn added. He got into the head of a potential janitor: “I tried cleaning it all, but instead got distracted and started painting famous actors’ faces on the walls with my blood mop!”

I think I struck a nerve, in a good way, when I asked about the game’s narrative. The Richerts don’t consider Viscera Cleanup Detail a “normal” game. What is normal anyway? “A game is a system with certain rules where the player provides an input and gets an output,” Nolan explained. “Gaming the system is when they’ve learnt the rules and can provide a specific input to get the best output…”

“Having no main goal means players have to make their own goal,” he added. “Having no powerful reward means they are freer to explore everything without subconsciously thinking about the opportunity costs.”

“It’s not enough to just go back in time and copy what they did back then,” Nolan said, assessing shooters and the like. “I think rather we should use the lessons from old things, but then evolve them in a different direction to the one the genre took.”

Nolan also commented on the idea of the silent protagonist, something in seminal games like Half-Life and Unreal.  “I hate it when the character I’m supposed to be says something stupid and cliched and completely different to what I was thinking.”

While the Richerts are planning Viscera Cleanup Detail‘s full release, expected this spring, they are perhaps not so silently showing the game’s potential to clean up other games. Viscera Cleanup Detail: Shadow Warrior, Runestorm’s collaboration with Devolver Digital, assigns a janitor to pick up severed corpses, and Viscera Cleanup Detail: Santa’s Rampage has a job in … you get the idea. Both minigames have players and the Richerts musing about what else might be ready for a good scrub. Metal Gear Solid? Call of Duty? Kill Bill? “Someone suggested (the theme of) ‘frat party,’ but … don’t wanna go there!” Arn typed to me. “Not enough blood, too much urine.”

Wherever it dispatches a janitor, Runestorm has an opportunity to create a symbiotic relationship with another creative concept. In the case of Shadow Warrior, sanguine dismemberment is counterbalanced with Runestorm’s comic relief, a few hours of play that can buffer pre-conceived notions about the former. In other words, Runestorm’s janitor might be able to bring new interest and disruptions to a game.

“One big thing we realized is that it’s much easier to come up with things inside a specific theme,” Arn reflected. “It’s easier to see where to add a joke, reference or the props than if you have a very open universe with endless possibility.”

If not as postmodern as its premise suggests, Viscera Cleanup Detail, in any iteration, might be a satire concocted from the Richerts’ game critiques and sense of humor. All three take responsibility for the latter.

“I’ll have you know, sir, my jokes are beyond reproach!” Nolan said, with what seemed like frantic typing. “To question them is to question the value of one’s life … to question one’s very enjoyment of pummeling!!!”