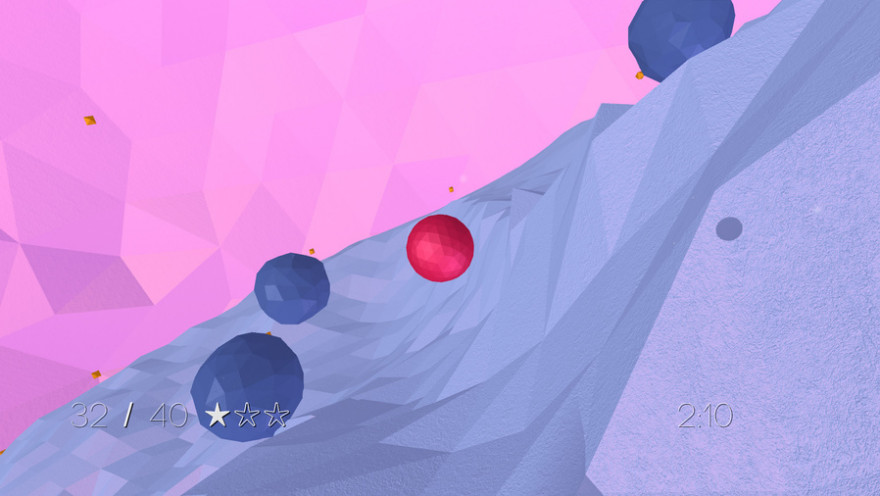 Trip-hop and chillwave artist Ryan Helsing wanted the music of his latest 9-track album, Visions, to be accompanied by a low-poly adventure across crystal lakes and zero-gravity race tracks.

He scooped up all his inspirations: his love of music production gleaned from the experimentation of high school; his major in computer science; and the soul-enriching visuals featured in the live shows of Bonobo, Emancipator, Four Tet, and Tycho.

the dreamy abstraction of 3D worlds married to emotive music.

Visions is now two albums. One entirely music, the other a series of physics-based toy worlds. You embody a ball, able to rise and sink at will, rolling through the air, only having to fight against the force of momentum. You take it on a journey of escape: from spheres that have swallowed each other, and drowning idyllic meadows of green trees, to the endless freedom of space.

The troubled guitar curls and rattling drums of “Cascade” are matched by hundreds of purple boulders crashing down a rocky hillside. The rising doom in the gentle rolling piano of “Glass” is played out by the pulsating transparent pillars that create the moving floor. Beeping horns of impatient traffic at the start of titular track “Visions” alludes to a need for high-speed, and so a twisting, looping corridor lets you race around its walls.

In two levels—the best ones—you’re able to crash into stacks of small spheres and green diamonds to scatter them in all directions. It’s the only time you really feel like you have any impact on the environment, and ideally, there’d be more of this clumsy interaction. However, rather than embracing the playfulness of physics, Visions focuses on having you collect the diamonds that occupy most of the space. Collect enough of them before the song finishes and you earn yourself three stars.

This is where the perceived needs of a videogame invades upon the dreamy abstraction of 3D worlds married to emotive music. A goal is provided where it needn’t be. It encourages you to fight against the ball’s momentum rather than just letting go.

The single redeeming feature of the diamonds is that they chime with a high-pitched note when collected, sometimes adding to the music, as if you’re playing along. Visions is worth floating through so long as you don’t stress yourself out trying clear each level of its stock of diamonds.

You can download Visions for free on Game Jolt. The music album is available on Bandcamp.